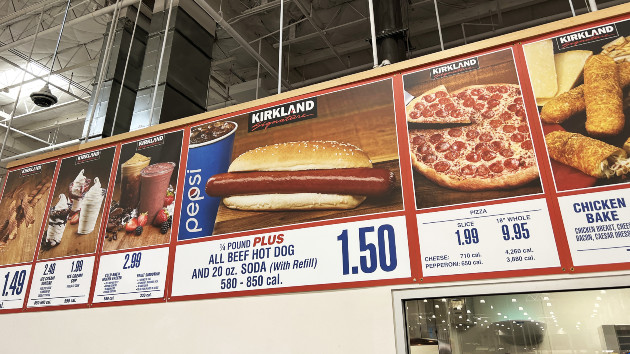 (NEW YORK) — If you grew up in a household with a Costco membership, chances are you can instantly recall sampling everything from spinach- and cheese-filled ravioli to electrolyte beverages and the feeling of freezing in the produce and refrigerator section, all to be rewarded with a post-shopping bite from the iconic food court where a crisp $5 bill could make you feel like royalty.

With 578 Costco warehouses across 46 states — more locations than The Cheesecake Factory, In-N-Out Burger or Wienerschnitzel, to name a few — thousands of U.S. consumers have come to know and love the Kirkland Signature hot-dog-and-soda combo, which has maintained the same $1.50 price since 1985.

And the company’s chief financial officer confirmed they are committed to keeping it that way.

During a presentation on Costco’s fourth-fiscal-quarter fiscal results, Richard Galanti told investors and reporters there are other areas, including Costco’s gasoline sales or travel business, where they could potentially turn more profit to help offset the low-priced food court meal.

When asked about Costco’s margins holding despite inflationary pressures and areas where they’re being more aggressive on pricing, Galanti said, “Lightning just struck me.”

“There are some businesses that are doing well with margin like gas business on a smaller way — in the travel business, those things help us be more aggressive in other areas,” such as “hold the price on the hot dog and the soda a little longer, forever,” he said.

Earlier this year, another Costco executive also said the hallmark item of the retailer’s prepared food court offerings would continue to hold at the same price.

Galanti also noted the strength in Costco’s fresh food business sales over a two-year period through this most recent quarter.

“The enormity of the improvement in the bottom-line, even now as we’re getting some of that back now, still net-net, were better than we were two years ago,” he explained of the company’s earnings. “So all those things help that process.”