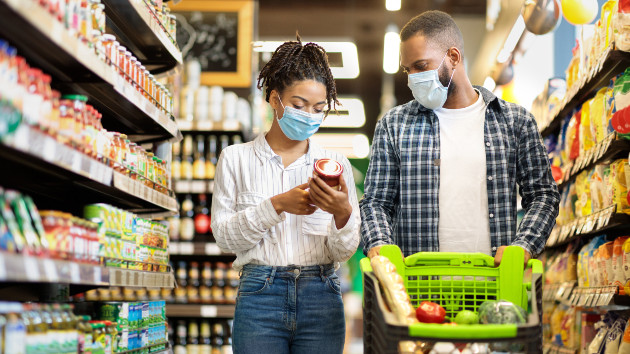 (NEW YORK) — Consumer prices continued to climb in July, further stoking concerns over inflation as the economy rebounds from the COVID-19 shock.

The Consumer Price Index, often looked to as a measure of inflation, spiked 5.4% over the last 12 months, the Bureau of Labor Statistics said Wednesday. This is the same pace reported in June, tying for the highest 12-month increase since August 2008.

The index rose 0.5% in July alone, the BLS said, leveling off somewhat from the 0.9% increase seen in June.

“This month’s increases were comparatively tame relative to what we had seen the last few months, and that’s in large part because the low bar of a year-ago number is starting to drop out,” Greg McBride, the chief financial analyst at Bankrate, told ABC News on Wednesday.

“What I mean by that is in the second quarter of last year, when the economy was on lockdown, price levels actually declined,” he added. “That exaggerated the increase on a year-over-year basis when we looked at it this year.”

McBride said there is no doubt prices are going up and inflation concerns are valid, adding that “there is more evidence that it could prove to be temporary.”

When compared to pre-pandemic data from two years ago, McBride said the annualized rate would fall to 3.1% versus the more concerning 5.4%.

The so-called core index, which accounts for all items except the more volatile food and energy indexes, climbed 0.3% in July and 4.3% over the past 12 months, the latest data indicate. The food index, meanwhile, increased 0.7% in July and 3.4% over the last 12 months. The energy index climbed 1.6% last month, with the gasoline index alone rising by 2.4%.

The prices for used cars, which have been skyrocketing over the past few months amid a chip shortage, leveled off a bit in July. Used car prices increased by 0.2%, a significant reprieve from the 10.5% increase seen in June.

As consumer demand bounced back when the economy began to reopen all at once, many firms, spanning multiple industries, have reported supply chain bottlenecks and issues hiring back workers.

“Labor shortages and supply chain constraints have been a considerable factor in higher prices and underscores the transitory argument,” McBride said. “This debate of is it transitory or is it more sustained is one that’s going to continue through the balance of 2021.”

Federal Reserve Chair Jerome Powell similarly downplayed inflation fears in a testimony before lawmakers in May.

“Inflation has increased notably in recent months,” Powell stated, according to his prepared remarks. “This reflects, in part, the very low readings from early in the pandemic falling out of the calculation; the pass-through of past increases in oil prices to consumer energy prices; the rebound in spending as the economy continues to reopen; and the exacerbating factor of supply bottlenecks, which have limited how quickly production in some sectors can respond in the near term.”

As these transitory factors abate, Powell said inflation is expected to drop back down again.