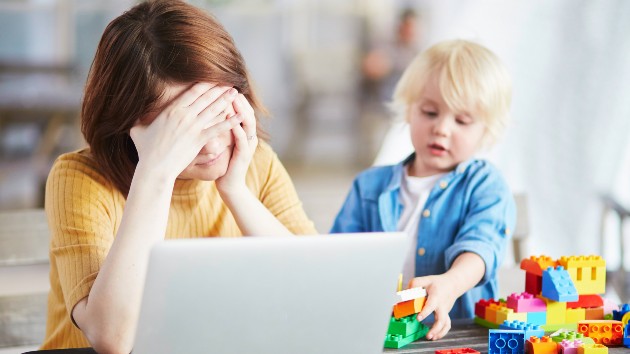 But President Richard Nixon vetoed the legislation, and Congress has not passed anything similar in the five decades since.

Now 50 years later, President Joe Biden has proposed an ambitious legislative proposal — his “American Families Plan” — that would, among other things, create universal pre-K for 3- and 4-year-olds, cap how much low- and middle-income Americans must spend on child care, extend Affordable Care Act tax credits and expand paid leave.

Amid the global coronavirus pandemic that has put the nation’s child care crisis in the spotlight and pushed more than two million women out of the workforce, advocates of child care reform say they remain cautiously optimistic that this will be a time for real change for parents, and especially moms, in the United States.

“It feels like the calls of exhausted mothers and overwhelmed fathers and child care advocates from around the country have actually been heard,” said Julie Kashen, a senior fellow and director for women’s economic justice at The Century Foundation, a progressive think tank. “It’s basically been 50 years since we’ve been able to have this kind of conversation, so that’s a really key question, if not now, when?”

The question comes as more Americans are getting vaccinated against COVID-19, more schools and business are returning in-person, and more jobs are coming back after months of record high unemployment.

Yet more men than women are returning to the workforce, data shows.

According to the NWLC’s analysis, it will take 28 straight months of job gains to get women back to where they were in the labor force before the pandemic started.

In remarks delivered after the April jobs report was released, U.S. Treasury Secretary Janet Yellen cited child care as one of the reasons people are not returning to work, saying, “Caregiving responsibilities and the absence of child care are still important reasons why people are unable to return to work.”

Over the past year of remote learning and a lack of access to child care, the burden of caregiving has fallen, as it so often does, on the shoulders of women.

“What is true is that when schools are closed and children are home, mothers, because they are the primary caretakers in the family, are responsible,” C. Nicole Mason, president and chief executive of the Institute for Women’s Policy Research, a women-focused think tank, told ABC News last year. “That’s just the bottom line, and that’s a 40-plus hour a week job alone and basically unpaid labor.”

‘Child care was in a crisis before the pandemic’

The unpaid labor that working women took on during the pandemic shined a glaringly bright spotlight on the child care infrastructure in the U.S., which experts describe as having been crumbling long before the pandemic shook it even looser.

“Child care was in a crisis before the pandemic,” said Laura Dallas McSorley, director of early childhood policy at the Center for American Progress (CAP). “The pandemic just revealed how shallow the roots were.”

Even before the pandemic, at least half of American families were living in areas considered “child care deserts,” or neighborhoods without enough licensed child care slots to meet the local demand, according to McSorley.

Industry groups warned during the pandemic that as many as half of the nation’s child care programs could close without government assistance. One estimate from the Center for American Progress predicted that more than four million child care slots could be permanently lost due to the pandemic.

“The biggest question is, the so many providers that shut down during the pandemic, was it temporary, or are they coming back?” said Rhian Allvin, CEO of the National Association for the Education of Young Children (NAEYC). “I think the jury is still out on that.”

Jennifer Noonan, a mom of four in Oregon, said she recently had to spend several weeks searching for child care for her two youngest children, ages 5 and 3.

“It was not having open spots and being too expensive,” Noonan said of the obstacles she faced. “I finally found a woman who was in my neighborhood and is a certified child care provider who works out of her home.”

In the months before she found child care, Noonan, 31, had to balance supervising remote learning for her two oldest children, ages 13 and 10, with taking care of her two younger children, while also doing her own online classes for her associate’s degree and working a part-time job.

“Because of the difficulty of finding child care, I had considered not going to school anymore,” said Noonan, who is pursuing a college degree to try to pull her family out of poverty. “If I had not found the daycare provider that my kids go to now, then I would have had to stop school, and that would have solidified where we are now in life.”

Once Noonan had access to child care for her kids, she faced another complication familiar to working parents: trying to afford child care.

“I told myself that even though I’m putting myself in debt, without me getting my degree, our family will remain in poverty,” Noonan said. “If we didn’t have [Oregon’s child care subsidy], I would be continuing to use loans.”

For many families, the cost of child care has increased during the pandemic, something that seemed improbable when even pre-pandemic the cost of infant child care in many states exceeded the tuition at public universities.

“You basically have to start saving as a high school student for your future child’s child care,” said Taryn Morrissey, a former Obama administration official and a co-author of the book Cradle to Kindergarten: A New Plan to Combat Inequality. “The cost of child care is just not feasible for so many families.”

Child care workers in the U.S., who are overwhelmingly women and women of color, already earn less than minimum wage, on average $11.65 per hour, and often do not have health and retirement benefits, according to the U.S. Bureau of Labor Statistics (BLS).

Between February and April of 2020, the child care industry lost over a third of its workforce, with women accounting for 95% of those losses, according to the NWLC.

The $50 billion stimulus the child care industry received earlier this year is what was needed to help the industry simply recover from the pandemic, not bring down expenses for families, according to Kashen.

“You start out where, if you have a lower income to begin with, child care is already going to eat up most of your family budget,” she said. “Now the costs of child care went up, because they had to reduce enrollment or they had to increase your safety supplies or were told by the government to shut down for a period of time and weren’t getting any income.”

“The costs of running child care centers got more expensive, so providers did have to raise their rates in order to cover those higher costs,” she said.

Will ‘burnt out’ moms return to the labor force?

The high cost of child care, the decreased access to child care, the additional caregiving responsibilities and the pandemic job losses endured by women are what experts describe as a quadruple threat that has them concerned about the post-pandemic landscape for women, especially moms.

“One thing I’m hearing from moms who stepped back last year is they’re not sure if they ever want to ramp back up fully,” said Audrey Goodson Kingo, editor in chief of WorkingMother.com, noting the “macro effect of many thousands or millions of women.” “I think moms are really burnt out right now, and that’s my big worry.”

Working moms total about 23.5 million in the U.S., or nearly one-third of all employed women, according to U.S. Census data.

Reliable child care would not only bring women back to work, but increase their lifetime earnings, according to research released this year by Columbia University and the NWLC.

Expanding access to affordable, high-quality child care would increase the number of women with young children working full-time by 17%, according to the research.

With expanded access to child care, a woman with two children would, on average, see a $94,000 increase in her lifetime earnings, which translates to a $130 billion boost in lifetime income for women collectively, according to the research. The increase is the equivalent of nine to 12 years progress in narrowing the gender pay gap.

Child care advocates say they are encouraged that policy makers are looking to not just repair the child care infrastructure damaged by the pandemic, but to rebuild it in a reimagined way.

Starting in July, 39 million families are set to receive monthly child payments, according to the U.S. Treasury Department. The payments are part of President Biden’s $1.9 trillion coronavirus relief package that he signed into law in March.

Biden’s American Families Plan, included in his broader infrastructure legislation, would create universal, free pre-K for 3- and 4-year-olds under a federal-state partnership much like Medicaid, whereby states would initially be responsible for 10% of the funding, which would eventually scale up to 50%.

Biden is also proposing extending the child tax credit put in place in his COVID-19 relief bill until 2025. And finally, Biden’s plan would guarantee 12 weeks of paid parental, family and personal illness leave.

The U.S. is the only country among 41 industrialized nations that does not mandate paid maternity leave, according to 2016 data from the Organization for Economic Cooperation and Development (OECD).

Biden’s plan, which he released in April as part of his infrastructure package, comes with an estimated $1.8 trillion price tag and must pass through Congress. The White House has described it broadly as a 10-year plan, with features like paid leave being implemented over the course of a decade.

Administration officials have tried to argue child care and education should be considered infrastructure because they are services that allow Americans to get to work.

Republicans have expressed more interest in approving spending only what they call “core” infrastructure items, like roads and bridges, broadband, airports, waterways, rails, ports and public transit, with user fees instead of corporate tax hikes to fund the investments.

Still, child care advocates are hopeful the pandemic has brought about a moment of change.

“What’s exciting to me is, yes, the amount of money and the signal about the kind of investment it takes to have a really strong early childhood sector, but also the administration’s willingness to not just invest because it is a crisis but really acknowledge the long-term value that child care has to this country and to deal with the economic structural issues that we’ve been talking about for years,” said Allvin. “It represents a dramatic sea change in how we fund and think about child care and how we invest in child care, and it’s really exciting.”

Noonan, who as a mom feels the real-life impact of policy makers’ decisions, said making child care affordable and accessible is not just about getting women back to work, but about giving children the best start possible and lifting families like hers out of poverty.

“It’s really important to focus on as we’re raising the next generation of Americans and keeping our communities healthy,” she said. “Without it, families like mine stay where we’re at.”