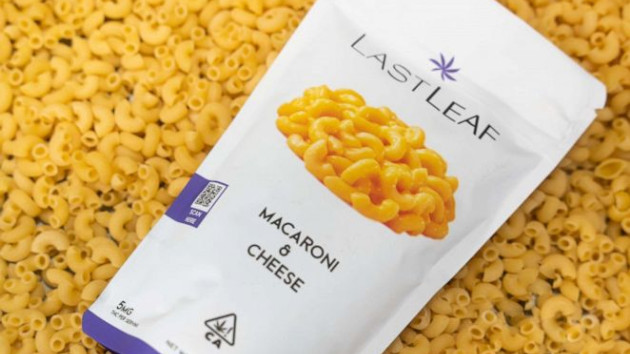 The James Beard award-winning chef and restaurateur recently rolled out his cannabis-infused line of gourmet mac and cheese, the first product launch from his new packaged food brand, LastLeaf.

The mac and cheese currently comes in two flavors, white cheddar with shells, and a classic cheddar with elbow macaroni.

Cannabis-infused food and beverages have exploded onto the culinary scene as more states legalize marijuana. Already, 18 states and the District of Columbia have legalized the sale of recreational marijuana for adults over the age of 21.

English’s twist on traditional mac and cheese is currently only available in California, but later this year he hopes to expand the line to more cities that have legalized marijuana for recreational use.

Cooking with cannabis is not a new concept for English. He began preparing dishes with the ingredient more than a decade ago when his sister Wendy was undergoing treatment for breast cancer.

“I saw my sister and a number of my relatives go through horrible cancer,” English said.

“My sister passed away, unfortunately, but during the time she was in remission, I would prepare things with cannabis and it seemed to really help her get through the struggles of how she felt after chemo,” he said.

Together with his business partner, Keith Burkard, English set out to develop healthy food products that contain THC and CBD.

“Consumers are ready for it, but it’s going to take a little bit of time to get embedded into the marketplace,” Burkard said.

There is some scientific evidence that marijuana may benefit those with cancer, easing chronic pain and chemotherapy-induced nausea.

Medical experts, however, have cautioned against using cannabis to treat mental health conditions, as it may be ineffective or worsen symptoms in some people.

The cheesy packaged pasta is far from the last of English’s ventures. LastLeaf says it plans to launch cannabis-infused pasta sauces, rubs and olive oil in the coming months.

You won’t find the cannabis concoctions on his restaurant menus just yet — the chef currently owns a number of eateries in places like Las Vegas, Boston and New York City, as well as a handful of international hotspots. For the moment, he’s busy opening up new establishments, including The English Hotel in Las Vegas.

Located off the Vegas strip in the Arts District, English says his namesake hotel is a “very artisanal, little boutique hotel” with a “funky vibe.” It is also home to his new restaurant, The Pepper Club, a reflection of English’s two favorite cuisines, Mediterranean and Japanese.

While the global pandemic has hit the hospitality industry particularly hard, English said business at some of his restaurants, including in Alabama, Connecticut, Abu Dhabi and Dubai, are nearly back to pre-pandemic levels.

“Weekends are jamming and people are out,” he said. “It’s just a question of us being able to handle the business because we don’t have all the pieces in place yet — staffing, supply chain — but it’s getting there.”

What to know about Queen Elizabeth II’s wealth, and the future of the British monarchy’s finances