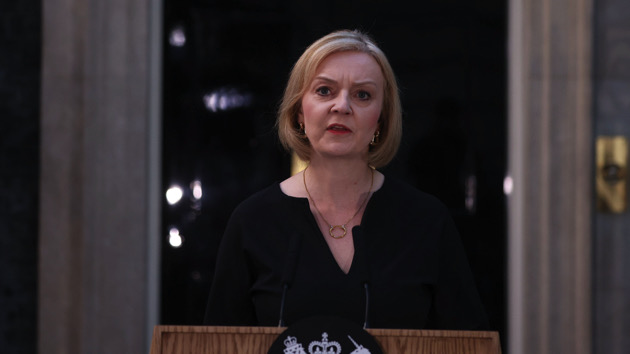 (LONDON) — New British Prime Minister Liz Truss on Thursday responded to skyrocketing energy prices in dramatic fashion with plans for a freeze on natural gas and electricity bills for millions of households that face massive rate increases as the winter months approach.

The policy could amount to one of the country’s largest government interventions in recent history, costing tens of billions of pounds and reducing prices on a wide scale.

The plan arrives amid an energy shortage brought about by the Russia-Ukraine war, which has worsened Britain’s inflation crisis, helping send price increases in the country soaring to a 40-year high of 10.1%.

Britain is hardly alone with its inflation woes. Sky-high inflation has strained economies and household budgets across the world, including in the United States, where cost hikes have slowed but remain near decades-long highs.

Rather than price controls, U.S. inflation policy has relied on a series of aggressive borrowing cost increases as the Federal Reserve tries to slash price increases by slowing the economy and choking off demand. But the approach risks tipping the U.S. into an economic downturn and putting millions out of work.

Economists who spoke with ABC News acknowledged the potential effectiveness of the British policy as a means of targeting that nation’s energy price spike but they differed sharply on whether the plan offers a blueprint that the U.S. should consider for sectors of high inflation.

Here’s how the British policy will work, and whether experts think it could be implemented in the U.S.:

What does Britain’s energy price cap do?

The plan, which would go into effect next month and last two years, caps the annual cost of natural gas and electricity for a typical British household at £2,500. The plan would do the same for many non-domestic institutions, such as schools; but those price caps only last six months.

The average annual cost for natural gas and electricity was otherwise scheduled to spike next month from £1,971 to £3,549, and thereby take up a sizable proportion of monthly spending for many British households.

Under the plan, the British government will pay energy suppliers the shortfall leftover from the reduction in the retail price. Truss, a member of the Conservative party, has not announced the cost of the measure but some estimates put the cost at roughly £150 billion, making it more than twice the size of the initiative that allowed British companies to keep paying workers amid COVID.

“This is a huge piece of state intervention ironically overseen by a conservative government suspicious of the state,” said Matthew Goodwin, a London-based professor of politics at the University of Kent.

Moreover, energy suppliers will receive the same amount of payment for their goods that they would have if the retail price had jumped, since the government is covering the shortfall.

This payment mechanism causes the large price tag for the British government and differentiates the policy from the price controls imposed in the U.S. during World War II, for instance, in which companies were asked to sacrifice profits for the war effort, said Hal Singer, a managing director at the consulting firm Econ One and adjunct professor at Georgetown’s McDonough School of Business.

“The reason why the U.K. policy is costly is because Truss is insisting that energy suppliers continue to be compensated at market rates,” Singer told ABC News.

The energy crisis caused by the Russia-Ukraine war has not impacted the U.S. as much as many countries, especially those in Europe.

However, overall inflation in the U.S. remains historically high, with price hikes for goods such such as rent and groceries far worse than cost increases in other areas of the economy. That dynamic raises the question of whether an approach like the one announced by Britain could work to address particularly severe areas of U.S. inflation.

Singer, of Econ One, said the U.S. should pursue such a strategy to bring down costs like skyrocketing rents, which result in part from the outsized market control retained by landlords.

“We absolutely should be pursuing these alternative remedies to address what many of us are starting to see now as the exercise of market power,” he said. “There’s a comparable crisis in the U.S. in terms of rents for apartments and homes.”

But Orazem sharply disagreed, saying that price controls would worsen the root problem behind inflation: a supply shortage. Price controls risk undercutting the incentive that high prices give to companies for increased investment and ramped up supply, which in theory should bring the market to equilibrium, he said.