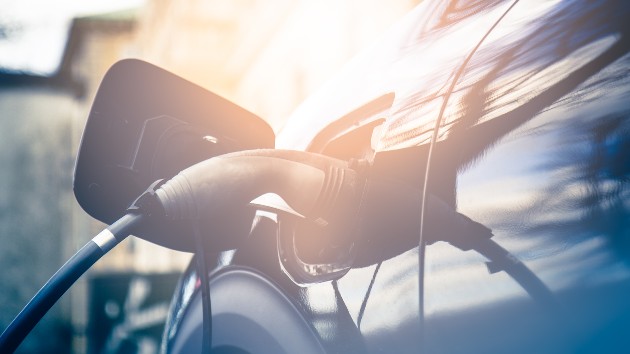 (NEW YORK) — Since President Joe Biden jump-started the conversation around electric vehicles in the early days of his administration, American car companies have announced plans to follow suit in making electric vehicle adoption a priority in the United States.

General Motors even threw down the satirical gauntlet this year in the company’s Super Bowl ad, which featured comedian Will Ferrell lamenting that the U.S. is lagging behind other countries in the race to electrify.

“Did you know that Norway sells way more electric cars per capacity than the U.S.? Well I won’t stand for it,” he says in the ad, before punching a globe.

“We’re going to crush those lugers,” he said, making it sound like “losers.” “Crush them. Let’s go, America.”

More than 54% of new vehicles registered in Norway last year were electric, according to The Norwegian Road Federation, compared to 2% market share in the U.S.

Norwegians responded with their own quips poking fun at the U.S.

“We want to maintain a strong relationship with the U.S. We shouldn’t have become the leading country in the world when it comes to electrical vehicles, without checking with you first. And we fully understand you want to punch us in the face,” the University of Agder in southern Norway said in its response video.

Audi Norway’s ad featured actor Kristofer Hivju, best known for his role as Tormund Giantsbane in Game of Thrones. He picks up a globe like the one Ferrell punched, saying “You want to do this to us? To me? To the world? We’re trying to save the world. Save it!”

While the commercials joke about a rivalry between the U.S. and Norway, the back-and-forth reflects a real race across the globe as countries try to become leaders in developing and manufacturing electric vehicle technology. China is another country that has invested heavily in electric vehicles and charging infrastructure; 47% of electric vehicles in the world are in China, according to the International Energy Agency.

Christina Bu, secretary general of the Norwegian Electric Vehicle Association, said parts of the world like Europe and China have been focused on creating business from electrifying transportation, but the U.S. has been largely dormant outside of Tesla and a few initiatives.

“This transition is happening now. And for the U.S., it’s, it’s all about taking part in this transition,” Bu said.

The International Energy Agency predicts adoption of electric cars will be 15 times higher in 2035 than it was in 2019.

Some major car companies have already responded to Biden’s push. General Motors’ announced a goal to achieve zero emissions by 2035, and Ford plans to double investments in electric vehicles and charging infrastructure. This year, 14 new models of electric trucks and SUVs are slated to launch in the U.S. market, which automakers say could appeal to American consumers who haven’t been interested in the smaller electric vehicles more popular in other countries.

“Automakers are trying to introduce vehicles that are appealing, because I think the problem historically has been that they have introduced electric vehicles that were maybe a bit small, maybe not a lot of content,” Edmunds Executive Director of Insight Jessica Caldwell said. “And Americans like large vehicles.”

Ford hopes to inspire people to make the switch from gasoline to electric by challenging the notion of what a “traditional” electric car looks like with the debut of its new Mustang Mach-E.

“It’s intended to get people’s attention to make you look at electric vehicles,” Ford’s General Manager of Battery Electric Vehicles Darren Palmer told ABC News. “It has the long hood and the muscular lines and the kind of performance you would expect from a Mustang.”

Palmer said Ford wants to combat many of the largest consumer hang-ups facing electric vehicles — range anxiety, trip time and price — with the introduction of the Mach-E.

“People are a bit apprehensive about being stranded because their vehicle has run out of batteries,” Caldwell said. “I think what will need to happen really is an increase of infrastructure across the country, so that it’s not just prevalent in large populated cities.”

The stakes of the electric vehicle race are about more than economic opportunity and bragging rights. Transportation makes up roughly a quarter of carbon dioxide emissions around the globe, mostly through burning fuel, and experts say to meet the goals of the Paris Agreement, it will be critical for as many countries as possible to transition to zero-emissions vehicles powered by renewable energy.

“Transportation is now the largest source of carbon pollution in the United States, and over the last 10 years the grid has gotten a lot cleaner, there’s been a lot more renewables added to the grid. And so the grid has gotten about 33% cleaner over the last 10 years, while gasoline has remained the same old dirty gasoline,” said Constantine Samaras, an associate professor of civil and environmental engineering at Carnegie Mellon University.

Samaras’ research found that 80% of the miles driven in the U.S. will need to be electrified to get deep cuts in carbon emissions from transportation. He said that in addition to more people buying electric cars, that will require transitioning the country to more renewable energy and changing infrastructure so it is easier for Americans to drive less.

“This hasn’t happened in Norway because we are more environmentally friendly than in the U.S., just to make that clear. It’s not like Norwegians are more green,” she said, adding that a lot could change in the U.S. through Biden’s message that electric vehicles and public transportation are a priority.

“So, I think Biden can make a lot happen just by being positive and signaling that this is where we’re going,” she said.