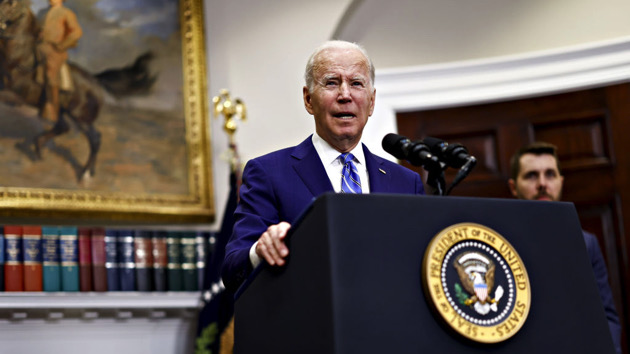 (WASHINGTON) — President Joe Biden on Wednesday said that the federal government will pay down the national debt this quarter for the first time in six years.

His remarks on economic growth came ahead of the Federal Reserve announcing a hike in interest rates Wednesday afternoon in an attempt to manage soaring inflation.

“Bringing down the deficit is one way to ease inflationary pressures in an economy, where a consequence of a war and gas prices and oil, food, and it all — it’s just a different world right this moment because of Ukraine and Russia,” Biden said.

Inflation is a big political problem for him and fellow Democrats ahead of the midterm elections as Republicans try to capitalize on soaring energy prices.

Biden’s remarks from the White House come after the Treasury Department updated estimates this week to project that the U.S. deficit will fall by over $1.5 trillion this year, a revision from the $1.3 trillion projected in Biden’s budget.

He credited the American Rescue Plan for growing the economy, though that relief bill has also been criticized for contributing to current inflation problems.

“Looking ahead, I plan to reduce the deficit even more which will help reduce inflationary measures and lower the cost for everyone’s families,” Biden said, as he tries to revive a stalled legislative agenda in Congress.

A White House official said, “This deficit reduction is occurring because the robust economic recovery means earnings and incomes are higher, which is increasing revenue, and because the Administration is winding down emergency spending.”

“There is no reason why a billionaire should be paid a lower tax rate than a teacher or firefighter,” Biden said Wednesday. “That is a sharp contrast to what’s today’s Republican Party is offering.”

Raising a plan released by Florida GOP Sen. Rick Scott, Biden blasted what he called “this ultra-MAGA agenda,” which he said would raise costs for Americans families.

The budget deficit fell by more than $350 billion in Biden’s first year, according to the White House, but with inflation at a 40-year high, Republicans are hitting Biden on the economy as the 2022 midterm election cycle kicks off and Americans are still paying more at the pump.

In an effort to manage inflation, the Federal Reserve is expected to raise the short-term interest rate by a half-percentage point Wednesday — double the usual amount and the sharpest rate hike since 2000, meaning it will soon cost Americans more to buy big-ticket items like cars and homes.

The annual deficit has expanded to around $3 trillion due to the pandemic’s blow on the economy, with the gross national debt surpassing $30 trillion for the first time earlier this year. Former President Donald Trump’s massive tax cut in 2017 has added more than $1 trillion to the debt by some estimates — a point Biden hit head on.