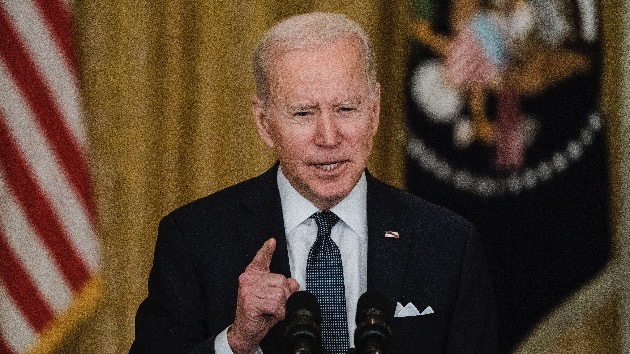 (WASHINGTON) — With fears of a Russian attack on Ukraine remaining a “distinct possibility,” President Joe Biden is sending a stark warning to Americans about what he says could be very real economic consequences at home — especially at the gas pump.

“I will not pretend this will be painless,” Biden said Tuesday while preparing Americans to be prepared for higher energy prices in the U.S. if Russian President Vladimir Putin decides to attack Ukraine and the Biden administration in turn puts its “powerful” sanctions in place.

The average price of a gallon of gas reached $3.51 on Wednesday, according to AAA, up roughly a dollar from a year ago and the highest level since October 2014. And in just the last month, prices in more than a dozen states have jumped 25 cents.

Russia is the second largest oil producer in the world, and if it invades and U.S. sanctions then keep its oil from the world market or make it more expensive, and ABC News Chief Business Correspondent Rebecca Jarvis reports some analysts predict prices at the pump in the U.S. could jump as much as 50 cents.

“I will not pretend this will be painless…We’re preparing to deploy all the tools and authority at our disposal to provide relief at the gas pump.” https://t.co/D9IPWPkiUh pic.twitter.com/OzJrnsBQx4

Polls show Biden already is being blamed for higher gas prices as part of the worst inflation in nearly 40 years — more than 7% last year — and it’s a big political problem for him and Democrats ahead of November’s midterm elections.

ABC News’ Chief White House Correspondent Cecilia Vega pressed the White House on what Americans should be ready for.

“Worst case scenario, what should they expect if this happens,” Vega asked White House press secretary Jen Psaki on Tuesday.

“He also wanted to be very clear and direct with the American people about what the impact could be and the fact that in his view, defending democracy and liberty is never without costs, but we need to convey to the American people exactly what that could look like.”

Psaki said “all options are on the table” to help bring down the price of gasoline and President Biden has been trying to get ahead of a major impact by shoring up supplies with allies and energy producers.

“We are taking active steps to alleviate the pressure on our own energy markets and offset rising prices,” said Biden.

Several Democratic senators have introduced legislation to temporarily suspend the 18.5 cents per gallon federal gas tax for the remainder of the year to help bring the price at the pump down.

The White House has not taken a position on the proposal.

In January, senior administration officials said they had been working with countries in North Africa, Asia, Europe and Asia to “ensure the continuity of supply” and lessen the price shock that comes with a shortage.

Despite the outreach and calls to pump more oil, Saudi Arabia has decided to abide by a five-year-old deal between OPEC+ countries and will not increase its production to full capacity, according to The Wall Street Journal.