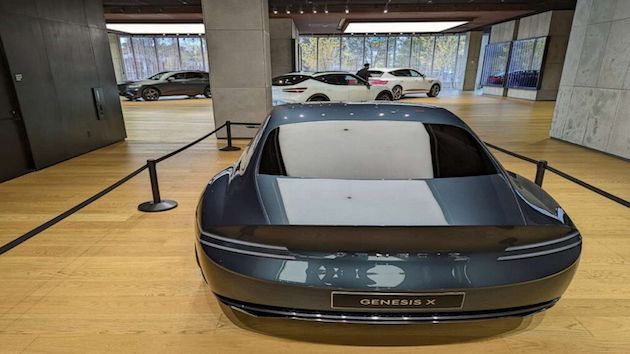 (NEW YORK) — Auto shows were once a marquee event for automakers — a way to let interested buyers see, sit in, touch and get acquainted with the latest models. With many companies pulling out of shows over exorbitant fees and the COVID pandemic canceling shows all over the world, automakers are taking a new approach to win over customers: Haute cuisine and experience centers.

Take Korean luxury brand Genesis. Consumers attending the New York International Auto Show at the Javits Center in Manhattan will not find the stylish and sporty GV70, Genesis’ highly acclaimed sport-utility vehicle that went on sale last year, anywhere in the cavernous space. But a short drive away is the Genesis House, an immersive “sanctuary” in the Meatpacking District that gives consumers a taste of what to expect from the brand. On the first floor are the company’s latest vehicles as well as concept designs and samples of colors and materials.

The 46,000-square-foot space, which officially opened in November, acts as part showroom and part art gallery. The vibe? “Distinctly Korean,” according to the automaker.

On the second level is Onjium, a Michelin-starred restaurant and cultural institute from Seoul, that serves authentic, upscale Korean dishes to gastronomes while the Tea Pavilion, a “veranda-like living room,” offers tea and Korean cookies with panoramic views of the Hudson River and High Line.

“The way to anybody’s heart is through their stomachs, so it makes sense,” Tony Quiroga, editor-in-chief of Car and Driver, told ABC News of Genesis House. A memorable meal can “heighten the prestige” of a brand, he said, and automakers are desperate to stand out and build loyalty.

Japanese automaker Lexus won over car — and food — aficionados with its Intersect by Lexus restaurant, a culinary “experience” that featured world recognized chefs and rotating menus. The Lexus connection was subtle; a wall collage of whitewashed vehicle parts or the Lexus-spindle grille in the bamboo-laminated lattice seamlessly blended into the architecture. Lexus decided to close the Meatpacking restaurant in January.

“From the outset our goal was to build a space designed for people to experience the ethos of the Lexus lifestyle without getting behind the steering wheel,” according to a press release announcing the news. “INTERSECT was intended to enhance the Lexus brand in an impactful and meaningful way, and it did just that. We are proud of what we have accomplished, and we consider INTERSECT BY LEXUS- NYC a great success. The Lexus brand will continue to develop creative and innovative lifestyle experiences to experience amazing, and we look forward to sharing this with customers for years to come.”

Ed Kim, president and chief analyst of AutoPacific, said visitors to Genesis House can learn about the cultural influences on the vehicle’s designs.

“Many brands are looking at creative ways to get the brand message across to consumers,” he told ABC News.

BMW, Lotus, Ford and Porsche have experience centers dotted across the U.S., allowing enthusiasts to pay money to test-drive the hottest models on a track — and possibly leave with one, too.

“It happens all the time — people buy a BMW after the program,” Dan Gubitosa, director of BMW Performance Centers, told ABC News. “We point them to a dealer closest to where they live.”

“We certainly expose people to the brand. That’s the objective of these schools,” Gubitosa said.

About 23,000 people attend BMW’s driving schools each year and the programs range from half or full-day instruction with professional race car drivers. Prices start at $299 for two hours and top out at $3,995 for two days at the M School.

“The high-performance cars are here. BMW’s most popular models — the X3 and X5 — are here too. We also have an off-road course. You can test-drive just about anything,” Gubitosa said.

“You don’t have to be an owner to come and drive or tour through the gallery,” Michelle Rainey, manager of the Atlanta Porsche Experience Center, told ABC News. “We want to be approachable to all people and we’re always making sure we have the latest and greatest vehicles so it’s representative of what’s at our Porsche dealers.”

More than 550,000 people have signed up for driving programs at the Atlanta and LA Experience Centers since 2015, according to a Porsche spokesperson. A major expansion to the Atlanta track, debuting in early 2023, includes a 1.3-mile handling circuit that was inspired by the Corkscrew at Laguna Seca, the Carousel from Germany’s Nurburgring-Nordschleife track and the Tail of the Dragon in the Smoky Mountains. There will also be a low-friction, wetted 197-feet asphalt circle and an ice-hill, with a wet and slick surface along with an incline and decline to demonstrate traction control, according to Porsche. Current programs start at $365 for 90 minutes and Porsche’s coveted sports cars like the 911 GT3, Taycan Turbo S and Cayman GT4 are available to drive.

“We’re teaching you all about the cars,” said Rainey. “We are always developing new programs that appeal to new audiences.”

Tyson Jominy, vice president of data and analytics at J.D. Power, pointed out that these experience centers are essentially creating brand ambassadors for automakers.

“If you buy a BMW and you go to the performance driving school, you’re going to be much more enthusiastic about the brand. It’s about indoctrinating you and getting you into the brand,” he told ABC News.

Added Kim: “For a brand like BMW or Porsche, performance is at the very core and very foundation of what they’re about. It makes sense to do things like experiences.”

Quiroga, of Car and Driver, still views auto shows as the ideal way to reach the largest audience of potential buyers. The NYIAS attracts at least 628,000 U.S. households on average each year, according to one report.

“Auto shows are incredibly expensive for manufacturers to attend … but they still matter for consumers,” he argued. “It’s still a really easy place to get excited and see a lot of cars without the pressure of a salesman. Not attending is going to hurt automakers eventually.”