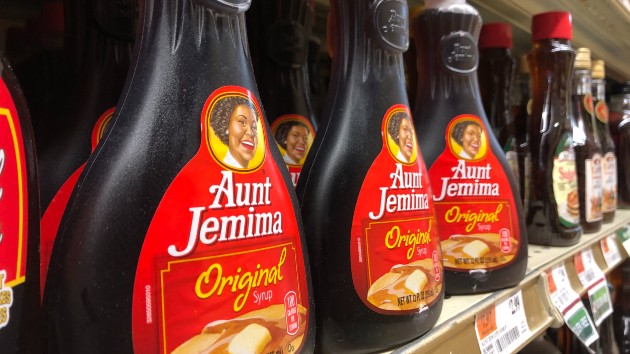 (NEW YORK) — Aunt Jemima is getting a new name, new logo and new look after announcing that it would be dropping the brand name following criticism that it featured a caricature of a Black woman that was a racist stereotype.

The new name — Pearl Milling Company — is an homage to the original mill built in 1888 that began making the self-rising pancake mix in 1889.

“Pearl Milling Company was a small mill in the bustling town of St. Joseph, Missouri. Using a pearl milling technique, they produced flour, cornmeal, and, beginning in 1889, the famous self-rising pancake mix that would go on to be known as Aunt Jemima,” read the company’s website in a statement announcing the change.

Aunt Jemima was one of the first brands to announce that it would be changing its name last June as protests unfolded across the United States in the wake of the death of George Floyd, a Black man who was killed on May 25, 2020, when a Minneapolis police officer knelt on his neck for nearly nine minutes.

The move set off a series of announcements from other entities like the Washington Football Team, musical groups “The Chicks” and “Lady A,” and food products such as Cream of Wheat, Mrs. Butterworth’s and Dreyer’s Grand Ice Cream who announced it was dropping the brand “Eskimo Pie” after a century — in examining the power of names.

Even the National Aeronautics and Space Administration (NASA) announced that they will stop using nicknames of celestial bodies that are culturally insensitive.

“Last June, PepsiCo and The Quaker Oats Company made a commitment to change the name and image of Aunt Jemima, recognizing that they do not reflect our core values. While the name on the box has changed, the great tasting products – the “pearl” inside the familiar red box – remains the same,” Pearl Milling Company said in a statement.

The Aunt Jemima brand “updated its image over the years in a manner intended to remove racial stereotypes that dated back to the brand origins,” according to a statement from PepsiCo.

The Aunt Jemima brand was started in 1889 by two men, Chris Rutt and Charles Underwood, and the company brought on a Black woman, Anna Robinson, to portray Aunt Jemima starting in 1933. The character was later portrayed by actress Aylene Lewis in the 1950s and 60s.

Years later in 1989, the company evolved Aunt Jemima’s image to what the company described as a “contemporary look” with pearl earrings and a lace collar.

When PepsiCo acquired the Quaker Oats Company and the Aunt Jemima brand in 2001, the company said the brand had “the goal of representing loving moms from diverse backgrounds who want the best for their families.”

Even though the company evolved and adapted, there had been plenty of calls through the years for the company to change the name of it’s product.

“This Aunt Jemima logo was an outgrowth of Old South plantation nostalgia and romance grounded in an idea about the ‘mammy,’ a devoted and submissive servant who eagerly nurtured the children of her white master and mistress while neglecting her own,” Riché Richardson, an associate professor in the Africana Studies and Research Center at Cornell University, wrote in an op-ed in the New York Times in 2015 titled “Can We Please, Finally, Get Rid of ‘Aunt Jemima’?”. “Visually, the plantation myth portrayed her as an asexual, plump black woman wearing a headscarf.”

PepsiCo said in their statement announcing the name change that Quaker worked with consumers, employees, external cultural and subject-matter experts to gather broad perspectives and ensure the new brand was developed with inclusivity in mind.

Said PepsiCo: “In the coming weeks, Pearl Milling Company will also announce the details of a $1 million commitment to empower and uplift Black girls and women, inviting the community to visit its website and nominate non-profit organizations for an opportunity to receive grants to further that mission. This is in addition to PepsiCo’s more than $400 million, five-year investment to uplift Black business and communities, and increase Black representation at PepsiCo.”

The new products will be hitting store shelves this coming June and their products will continue to be available under the Aunt Jemima name without the character image until then.