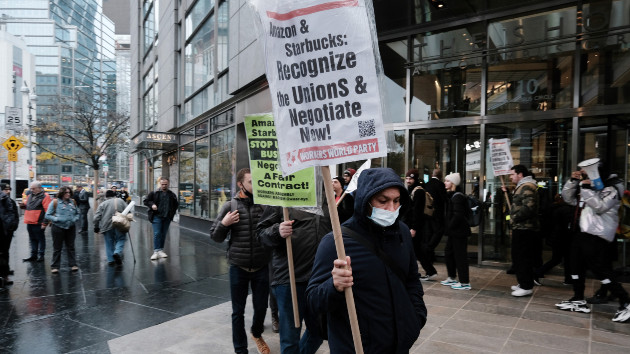 But labor headway at the two companies has stagnated in recent months, jeopardizing the ultimate success of the campaigns and casting the continued growth of the labor movement into doubt.

The downshift in momentum at Amazon and Starbucks owes primarily to the anti-union postures and deep pockets of the corporations, labor experts told ABC News.

The setbacks could deter workers inside and outside those companies from organizing their workplaces, as they weigh the risks of confronting their bosses against the potential rewards, they said. Still, the labor movement remains galvanized by sky-high prices, a tight jobs market and near-historic public approval that should enable continued growth next year, the experts said.

“The workers are stalled at Amazon and at Starbucks,” Nelson Lichtenstein, director of the Center for the Study of Work, Labor and Democracy at the University of California, Santa Barbara, told ABC News. “The companies have a plethora of legal and administrative techniques at their command, and their greatest weapon is delay.”

Despite the challenges faced by headline-grabbing union campaigns, the surge of U.S. labor organizing will persist, he said.

“Inflation has created real pressure on people and a real sense of collective action,” he said.

In the spring, a worker-led independent group unionized a 6,000-employee Amazon warehouse in Staten Island, New York, the first-ever U.S. union at the company in its history. Since then, however, the Amazon Labor Union, or ALU, has lost two consecutive union elections at other facilities; and certification of the Staten Island victory remains tied up in legal challenges.

“There are going to be ups and downs,” said Seth Goldstein, a lawyer at Julien, Mirer & Singla, who represents the ALU. “It’s a marathon.”

Starbucks workers, meanwhile, unionized more than 260 stores this year but the pace of union elections has fallen significantly and workers have yet to sign a union contract at a single location.

Over the first half of 2022, the National Labor Relations Board received union election petitions from an average of 47 Starbucks stores per month; but over five months ending in November, that election rate dwindled to 11 stores per month, according to data from the NLRB, a federal agency that oversees union elections.

Neither Amazon nor Starbucks responded to a request for comment.

“One of the big effects of Amazon and to some extent Starbucks organizing is it has encouraged other workers to raise their voices and think, ‘oh gee, maybe a union works for us, let’s try to get one,"” Thomas Kochan, a labor researcher and professor emeritus at the MIT Sloan School of Management’s Institute for Work and Employment Research, told ABC News.

“Workers are now looking around and saying, what’s the use of that?” he added. “If they can’t get a contract why should we go through with all this?”

Defying the apparent loss of momentum at Starbucks and Amazon in recent months, however, a surge in union organizing across the economy has sustained itself.

Over a year-long period ending in September, petitions for union representation jumped 53%, NLRB data showed. Moreover, this year labor unions reached their highest level of public support in the U.S. since 1965, a Gallup poll showed.

The resurgence of union organizing is especially stark in light of a decades-long labor decline that brought the private sector union rate to a record low of about 6% last year, government data showed.

Sara Beth Ryther, an employee at a Trader Joe’s in Minneapolis that unionized in August, said workers at the store draw inspiration from the campaigns at Starbucks stores nearby.

“When we go to Starbucks stores that are unionized around us, we see actions being taken in the workplace and we read about them in the newspaper,” she said. “I think it’s preserving this energy in a way that maybe hasn’t been the case in the past.”

“It’s really important for folks to know how unified many of these labor movements are,” she added.

Across the economy, the sense of company neglect for worker well-being that gave rise to pandemic-era organizing has continued to drive action, Michelle Eisen, a Starbucks employee at a store in Buffalo, New York that organized in December, told ABC News.

Eisen acknowledged setbacks faced by workers nationwide in the Starbucks campaign, citing anti-union efforts undertaken by the company. While those tactics may have dissuaded some workers, they’ve motivated others, she said.

“There’s always a chance some people will say, ‘You know what, this is exhausting and I can’t keep doing this,” said Eisen, a spokesperson for Starbucks Workers United, a labor union. “But I think what we’re seeing is more people willing to fight anyway.”