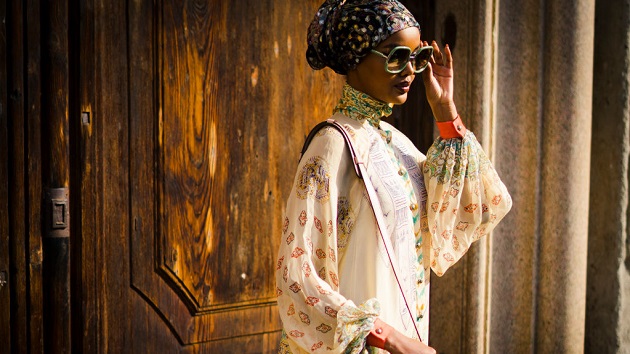 (NEW YORK) — Halima Aden made waves in the fashion industry when she became the first hijab-wearing supermodel, gracing the covers of top fashion magazines like Vogue.

She also became the first hijabi woman to model for Sports Illustrated and hit the runway for some of the world’s top designers — from New York Fashion Week to Milan.

But last year, while she was on top of the game, the Somali-American model quit the fashion industry because she felt that she had lost control of her identity in an industry that was incompatible with her religious beliefs.

But now, the 23-year-old is diving back into the fashion world — this time, on her own terms by being intentional about the spaces she is a part of and staying true to herself.

“It feels amazing to be back in fashion. I love fashion. I just didn’t love mainstream fashion and the tokenistic way that they’ve treated me. But there’s ways to do both, there’s ways to still be part of the fashion world while still remaining true to who you are,” she said.

Aden was born in a refugee camp in Kenya but when she was 6 years old, her family moved to St. Cloud, Minnesota. She gained national attention when she became the first hijabi woman to compete in the Miss Minnesota pageant. During the 2016 competition she wore a burkini by Modanisa and was a semifinalist.

A year later, Aden signed a three-year modeling contract where she was promised a private changing area during shoots and shows. Her contract also outlined that her hijab was non-negotiable.

But according to the model, some stylists had other plans and some tried to downplay her hijab or replace it with other clothing items to change her look.

“The last two years, I trusted the team on set to do my hijab and that’s when I ran into problems,” she said in a BBC interview after announcing that she’s quitting. “like jeans being placed on my head in place of a regular scarf. The way they styled it, I was so far removed from my own image. My hijab kept shrinking and got smaller and smaller with each shoot.”

At the time, she said that her mother, who she is very close to, also wasn’t a big fan of her being in an industry so focused on looks and they had conversations about her faith, her identity and and her responsibility as a role model for Muslim women.

‘Hands off my hijab’: French Muslims rail against ban on religious garb in soccer
Amid an ongoing “internal conflict,” Aden found herself in situations where she had to compromise her beliefs in the name of fashion. But when her younger cousin expressed an interest in pursuing fashion and asked her for guidance, Aden realized that she couldn’t compromise anymore.

“I remember panicking, and I was like, ‘Oh my God, no, no, no.’ … I didn’t want her to be in this space because I realized it’s not a safe industry for a young hijabi woman,” Aden said.

“When I said no to her, I had to look in the mirror and ask myself, ‘Why am I in an industry that isn’t safe enough for my little cousin?"” she added. “… I had to then [come] to the conclusion that I must step away, because I didn’t want to be a hypocrite.”

When she announced that she was leaving the fashion industry, Aden shared a photo of her shoot with Rihanna’s Fenty Beauty, writing, “(Rihanna) let me wear the hijab I brought to set. This is the girl I’m returning to, the real Halima.”

“She was the first to pick me back up and say, ‘No, you’re not going to quit, you’re going to dust yourself off and you’re going to come back bigger and better than ever,"” Aden said. “[Now] I’m using my platform the right way, and she’s my biggest fan and supporter.”

Over the past year, Aden has been using her platform to speak up and share her story and by partnering with brands that are in line with her beliefs. She hopes to continue being a positive role model for women by encouraging them to remain true to themselves.

Asked what advice she would share with women who want to work in the fashion world, Aden said, “Own your identity, be proud of where you come from … have clear boundaries, and when those boundaries are being messed with, speak up.”