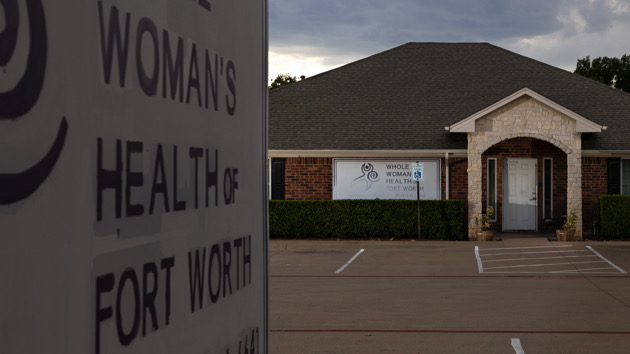 (NEW YORK) — When Katie Quinonez, the executive director of an abortion clinic in West Virginia, saw the Supreme Court decision that overturned the federal guarantee of the right to an abortion, the first word she uttered was an obscenity.

The nonprofit Women’s Health Center of West Virginia, located in Charleston, faced the immediate risk of prosecution under a state abortion ban from 1882, so Quinonez and a coworker made 60 calls to patients canceling procedures scheduled for the ensuing three weeks, said Quinonez.

“That was definitely one of the worst days of my entire life so far,” she said. “Some of the staff were so upset that they couldn’t stop crying.”

Not only did the Supreme Court decision stop the clinic from providing abortions, but it delivered a crushing blow to the nonprofit health center’s financial stability, Quinonez said. This is a financial reality many abortion clinics — which often provide key care in communities and already face tight finances — are now contending with as they decide how, or if, they can move forward.

Abortions accounted for 40% of the Women’s Health Center of West Virginia revenue, Quinonez said, adding that there would be no easy way to replace such a large a chunk of the clinic’s $1.6 million annual budget. (At least for now, the clinic can again provide abortions, since a lawsuit brought by the clinic days after the Dobbs decision has paused enforcement of the ban.)

“Being unable to provide abortion care absolutely puts us in a precarious financial position,” Quinonez said. “Our ability to keep our doors open very much depends on revenue from the services we provide, as well as grants and donations.”

The loss of a community clinic dramatically curtails reproductive health care access for women, especially low-income women, according to research. One in three low-income women depend on clinics — such as a health center, Planned Parenthood or a publicly funded clinic — to get contraception, according to a Kaiser Family Foundation study released in 2019. Another study, published in the Journal of Women’s Health in 2019, found that greater travel distance for an abortion is associated with higher out-of-pocket costs, delayed care and negative mental health effects.

Remaining open but stopping the service altogether denies many clinics a key source of revenue from insurers or patients paying for the procedure, clinic staff said. Meanwhile, the choice to close and move means losing revenue from patients while facing front-end moving costs such as buying or leasing a building, relocating employees and transporting equipment, among other expenses, the clinic staff added.

Within a month of the Dobbs decision, 43 clinics across 11 states in the Midwest and South had stopped providing abortions, either because they had closed or stayed open but no longer offered the procedure, according to a study released last month by the Guttmacher Institute, a nonprofit research organization that supports abortion rights.

Even before the onset of state-level abortion bans, clinics struggled to financially sustain themselves, Caitlin Myers, a professor of economics at Middlebury College who specializes in the financial dynamics behind abortion care, told ABC News.

The budgets at many clinics strain under the weight of compliance with onerous regulations, dependence on low-income patients who often lack insurance, and the absence of federal funding and in many cases Medicaid coverage for abortions, she said.

Clinics also face significant legal costs navigating a maze of measures at the federal, state and local level, which became even more complicated after the court overturned Roe, said Erin Grant, the deputy director at the Abortion Care Network, a membership organization made up of more than 200 independent clinics nationwide.

“The legal and litigation costs are one of the No. 1 barriers,” Grant said. “That doesn’t just have to do with the abortion ban itself. This is about building regulations, Department of Health inspections and dealing with insurance companies.”

For clinics that have chosen to move since the Dobbs decision, a new set of costs has arisen.

Whole Woman’s Health, a health care company that manages nine clinics across five states, announced last month that it plans to close four Texas-based clinics after an abortion ban went into effect in the state. To continue to meet the needs of patients in Texas, the company hopes to open one or more locations in nearby abortion-friendly states, said Amy Hagstrom Miller, the founder and CEO of Whole Woman’s Health.

The typical annual budget for one of the for-profit clinics run by Whole Woman’s Health is $1.5 million, the company said.

The cost of closing clinics and reopening elsewhere is immense, Hagstrom Miller said. Due to the planned closures, Whole Woman’s Health has laid off roughly half its staff in Texas. Meanwhile, the company has sought to get out from under leases on two of its Texas facilities at the same time it has pursued a lease on a facility in New Mexico. On top of that, the company has looked for temporary storage for medical equipment and planned the relocation of remaining staff.

“All of that requires capital resources that we don’t have now because we’re not able to see patients, which of course is the major source of income in any medical practice, not just abortion clinics,” Hagstrom Miller said. “You don’t have income if you don’t have patients.”

“It is a big financial burden,” she added.

Melissa Fowler, the chief program officer at the National Abortion Federation, an umbrella organization that counts roughly 500 member clinics in the U.S. and abroad, put it bluntly: “It’s incredibly difficult to open a clinic, especially in a new state.”

It is unclear how many clinics have sought to move since the Dobbs decision, and the number may be relatively small. The financial impact of state-level abortion bans may also be less significant for clinics at which the procedure makes up a smaller proportion of its services.

For instance, Planned Parenthood told ABC News that none of its affiliates had closed or moved since the Dobbs decision. Further, abortion makes up about 3% of services delivered at its affiliates, according to the organization’s 2020 annual report, the most recent available.

Needing additional revenue, many abortion clinics have received a surge in donations since the Supreme Court overturned Roe. As of early August, a GoFundMe launched by Whole Woman’s Health had raised more than $285,000, though the figure falls short of its $750,000 goal.

Still, in light of a strict abortion ban passed by the West Virginia Senate during a special session late last month, the organization has cut its anticipated revenue for the coming fiscal year, ending in June 2023, to just a little over half of what the organization brought in over the previous fiscal year.

“Right now, we’ve received a lot of support from our community,” she added. “We certainly aren’t going anywhere in the near future and we’re working to add more services regardless of what happens to our ability to provide abortion care.”