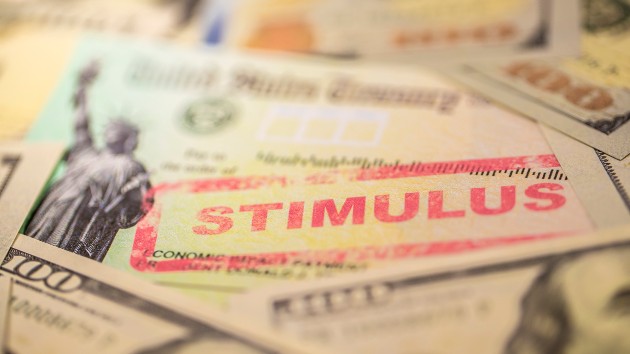 (NEW YORK) — For millions of Americans like 27-year-old Edvonte Copeland, stimulus checks from the federal government have provided a financial lifeline.

A special education assistant and assistant athletic director at a high school in Minneapolis, Copeland’s work became unpredictable as the pandemic forced classrooms to go virtual.

When the most recent $600 check arrived in the mail, Copeland immediately used it to help pay his bills.

“When I’m not working, I’m not able to do anything, but the bills are still coming,” he said.

In an attempt to boost an economy hamstrung by the pandemic, the federal government sent out two rounds of direct stimulus checks to many Americans: $1,200 last spring and $600 at the end of last year for individuals earning up to $75,000 and married couples making up to $150,000.

U.S. Census Bureau data showed many Americans, especially in lower-income households, used their checks in the same way Copeland did: to pay for daily essentials like groceries, gas and utilities.

While many struggling Americans have used their checks to make ends meet, retail sales in January also spiked unexpectedly after some Americans put their stimulus money toward furniture, appliances or clothes. Research also shows others have saved the money or used it to pay down debt.

Elena Panyard graduated from Central Michigan University three years ago and put both of her stimulus checks toward her student loans.

“I used to dream about someone just tossing a thousand dollars in my lap so I could pay off my loans, because it’s so stressful,” she said.

Census Bureau data showed households with incomes between $75,00 and $99,999 were more likely to use their first stimulus payments to pay off debt or add it to savings, compared to households overall.

Researchers based out of Harvard University estimated that households earning above $78,000 only spent $45 of the recent $600 checks one month after they received them.

Some economists argue that defeats the purpose of the checks to stimulate the economy, saying the money should be more targeted toward those in need.

“If the goal is to help households who are truly suffering, households earning a six-figure income, who’ve kept their jobs through this experience, are pretty low on the list of households who are suffering,” said Michael Strain, director of economic policy studies at the American Enterprise Institute.