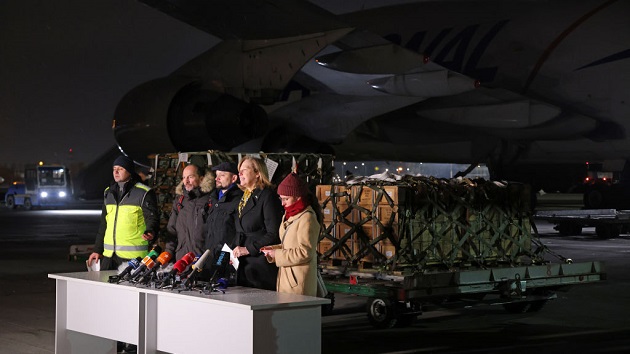 (KYIV, Ukriane) — The acting U.S. ambassador to Ukraine told ABC News Tuesday that an order for diplomats’ families at the embassy to leave the country was issued because Russia could attack “any day now” if it chose.

Kristina Kvien, the embassy’s charge d’affairs, made the remarks after standing in the bitter cold with a Ukrainian deputy defense minister to receive a 79-ton delivery of American military aid at Kyiv’s Boryspil Airport, intended to help Ukraine defend itself against Russia.

The U.S. State Department on Sunday ordered diplomats’ families to leave and authorized non-emergency staff to depart if they choose, in light of the threat of a possible Russian invasion, as Moscow masses over 100,000 troops near Ukraine’s borders. Ukraine’s government has criticized the decision, calling it “premature” and “excessively cautious.” The United Kingdom, Canada, Australia and Germany have since followed suit in various forms, but the majority of European countries have said so far they do not believe such a step is warranted.

Kvien told ABC News the decision on the partial evacuation was taken out of an “abundance of caution” given the scale of the Russian build up.

“The decision was made because right now Vladimir Putin and Russia have built up such military might on the border that they could take an action any day now,” she said. “And with that in mind, we felt that out of an abundance of caution, we had to make sure that our embassy families were safe. So that was the basis for a decision.”

Kvien said Russia had built up so many troops it “means that Russia could do anything at any moment.”

“It’s like a gun to the head of Ukraine,” she said. “And we don’t think that Ukraine should have to live with a loaded gun to its head.”

Ukrainian officials have publicly disagreed with the U.S. assessment that a Russian attack could take place at any moment. A deputy defense minister, Hanna Malyar, on Tuesday said the number of Russian troops at the border currently is “not enough for a full-scale invasion.”

In general, Ukrainian officials are more skeptical that Russia will really go through with a major attack and in recent days they have become increasingly vocal in contesting the picture coming from the U.S. that an attack is imminent. The head of Ukraine’s national security council, Alexey Danilov, on Monday told the BBC that “the number of Russian troops is not increasing in the way many people are presenting it”.

Ukrainian officials instead have suggested they believe Russia’s build up is currently intended to destabilize Ukraine with the threat of attack, including by undermining its economy. Ukraine President Volodymyr Zelenskyy in video addresses has urged Ukrainians not to panic and that the threat of invasion is not worse now than when Russia began the conflict in 2014.

“I do think that President Zelenskyy is taking the threat very seriously, and he is being careful to make preparations as needed,” she said.

“They’ve been living with Russian threats for a long time. So I would say that they are just a bit more, ‘sang froid’ as they say, in French. But that doesn’t mean that they don’t take them seriously,” she said.

The U.S. military aid shipment landing on Tuesday was the third to arrive in a week, part of a $200 million security aid package approved to help Ukraine defend itself and deter Russia.

The U.S. is still seeking to avert a Russian attack through diplomacy. Russia has demanded guarantees from the U.S. that Ukraine will never join NATO and that the alliance will pull back forces from eastern European countries that joined after the Cold War.

The U.S. has already ruled that out but has proposed discussing other security issues, such as limits on missiles deployments and military exercises.

Kvien repeated there are “some areas” that the U.S. is able to talk about with Russia to try to address its concerns, such as “arms control, better transparency in terms of military exercises,” but she reiterated that Ukraine’s choice to try to join NATO was not on the table. She said she hoped Putin would choose to take the path of diplomacy.

“I think that it’s the only reasonable path. I think it’s the only path that ultimately will lead to a more secure Europe, which Mr. Putin says he would like to have,” she said.

Pentagon now reports about 400 UFO encounters: ‘We want to know what’s out there’

Buffalo gunman was ‘armed with weapons of war and hate-filled soul’: Biden