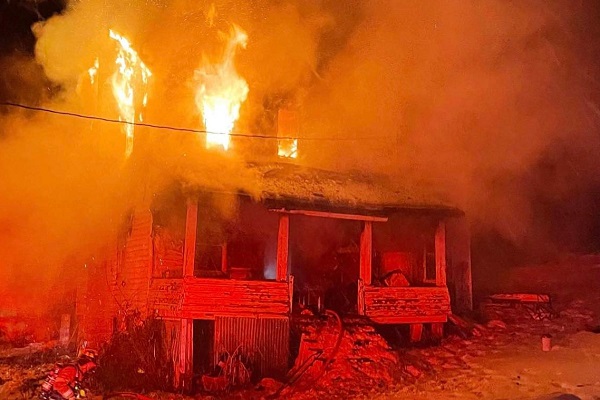 Ferguson Township, PA – A home was destroyed by fire in Clearfield County, leaving the family without a home.

Fire crews say they arrived on scene around 6:10 Sunday evening to a structure fire along Ross Road in Ferguson Township, near Lumber City between Grampian and Mahaffey.

Although firefighters started an aggressive attack of the fire from inside the home, the integrity of the building soon became compromised and crews had to move to fight the fire from the outside.

Unfortunately, the home and all of its contents were a complete loss.

The cause of the fire is being investigated.

Although there is no official report, it does not appear that anyone was injured.

Unofficial reports on social media indicate that a family of six lived there, Paul and Lorilee Bloom and their four children. Again, it appears no one was injured but they did lose their entire home and all their belongings. Donation drives are being organized.

Photo is courtesy of the Rescue Hose and Ladder Company in Curwensville.

Sunday at 18:10, Company 8 was dispatched to a reported Structure Fire along Ross Road in Ferguson Township. Engine Tanker 8-2, Engine Tanker 8-1, Rescue 8-1, Rescue 8-2, Brush 8, 853, 852, MedCom 8 and MCU 8 all responded. Chief 8 arrived first to find a dwelling, well involved. Engine Tanker 8-2 arrived and laid approximately 600 feet of 5 inch supply hose into the scene up Ross Road, from the intersection of the Tyrone Pike. Company 8’s crew deployed multiple attack lines and an aggressive interior attack ensued. Unfortunately, after several minutes, the structural integrity of the house became quickly compromised and could no longer facilitate an interior attack. Suppression modes then turned to defensive. Upon arrival, Attack 29 was able to pull a draft out of a nearby creek in order supply water to scene. Engine Tanker 8-1 fed the scene and took command of the tanker shuttle which supplied the scene with tens of thousands of gallons of water. Company 8 was assisted by the following units. Engine Tanker 29, Attack 29, Brush 29, Engine Tanker 9, Engine Tanker 6, Truck 6, Engine Tanker 25, Engine Tanker 26, Brush 26, Tanker 27, Attack 28, Tanker 28, and Jefferson Engine 8. A big thanks to Sykesville who transferred an Engine to our station, ultimately diverted to the scene, assisted our EMS crew on another call, and stood by in our station until we could return. Thanks also goes out to Sheetz for donating Coffee, Ferguson Township for Road Maintenance, and Unilec for responding to the scene to control utilities. The cause of the fire is being actively investigated by the Pennsylvania State Police Troop C Fire Marshal Unit. Please keep the family of this incident in your thoughts and prayers as the house and its contents are a total loss.

From Rescue Hose and Ladder Company: Anyone wishing to help with donations for the Bloom family, here is some information for clothing sizes/needs. Please feel free to drop items off at the fire station hall upstairs in the dining area or PM OR call the the hall to make arrangements. Also, we found out that monetary donations can be sent to Paul’s mom’s address of, “In Care of Paul and Lorilee Bloom”, 423 George Street, Curwensville, PA 16833. 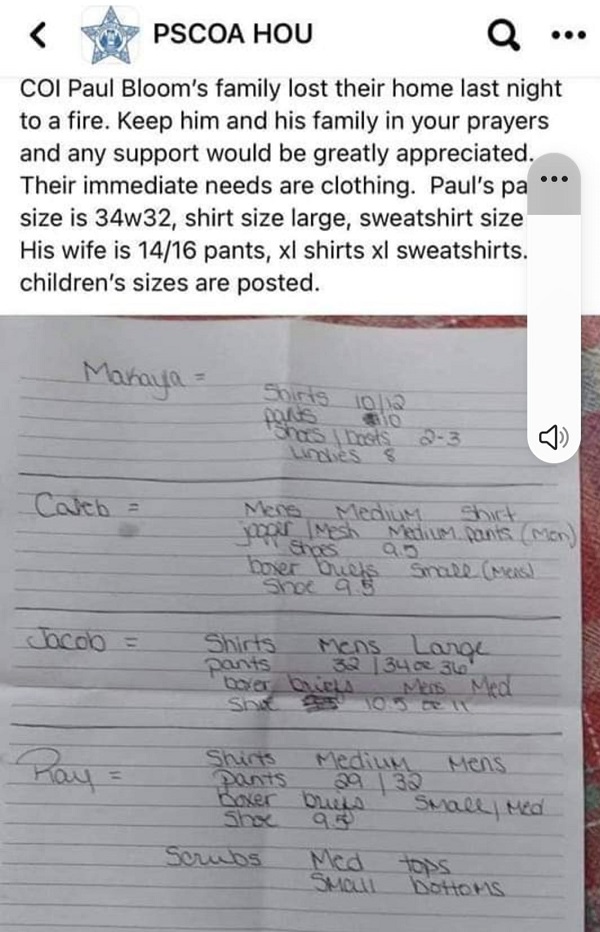