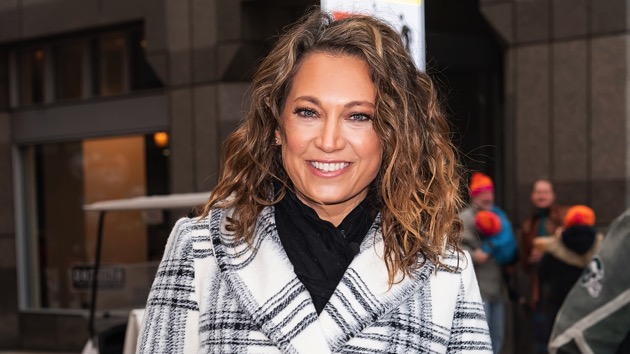 (NEW YORK) — When ABC News chief meteorologist Ginger Zee thinks back to one of the “darkest points’ of her struggle with mental health, she thinks of a photo of herself smiling.

In the photo, Zee, now ABC News chief meteorologist, is smiling wide as she sits at the desk at her first on-air meteorologist job at a local TV station in Michigan.

The photo, she said, was taken not long after she attempted suicide for the second time.

“That picture says to me, ‘Here’s a person who is trying so hard to hide what she was truly feeling,"” Zee said. “It was one of my darkest points in all of my mental health journey, and my smile is so forced and is so big.”

Zee said she hopes the takeaway from the photo for people is that a person who appears smiling, who is functioning in society, can at the same time be struggling with their mental health.

“I hope that me talking about it can help distinguish for people that just because you look bright and sunny does not mean that that is what’s happening on the inside,” she said. “All of us are complex human beings. We are also allowed to have a really big smile one day and a non-smile the next day.”

Zee, a mother of two, she said her mental health struggles began “at a very young age,” but went unaddressed, in part because mental health was even more taboo at that time.

“It was the 1980s, and a lot of people didn’t know what to do,” Zee said. “I don’t think my parents could have been educated enough to recognize it or see it.”

Zee said she turned to anorexia as a young girl as a way to feel more in control of her life. When she was in college and went on medication to treat narcolepsy, Zee said the “extremes” of her depression began to appear.

She had her first suicide attempt while in college, followed by the second, several years later, while working as an on-air meteorologist.

As Zee has worked through her own recovery, she said she has tried to break the stigma of mental health by speaking about it publicly, first in her bestselling book Natural Disaster and now in her newly-released follow-up, A Little Closer to Home.

She described people as often being “shocked” when they hear her talk about therapy and hospitalization, especially after seeing her smiling on TV each morning on GMA.

In the United States, nearly one in five adults, over 51 million, live with a mental illness, according to the National Institute of Mental Health (NIMH).

Starting at puberty, young women are at the greatest risk for major depression and mental disorders due to physiological changes. As women age, they also experience certain depression-related illnesses than men don’t, such as postpartum depression and postmenopausal depression and anxiety.

Zee said that as a woman in the public spotlight, she panicked when she decided to go public in her first book about seeking treatment for her mental health in a hospital.

“When my first book was about to be printed, and the first line was, ‘I checked myself into a mental health hospital,’ I woke up in the middle of the night, and it was like, ‘Oh my gosh, I’m gonna ruin my life, my career, nobody’s gonna hire me,"” Zee recalled. “And I’m telling my husband all this.”

Zee said her husband, Ben Aaron, helped her overcome her fear by reminding her that people want to hear not just the superficial, good stuff, but also the real-life stories of struggle and growth.

“He kind of told me to get over that hump, and once I did, it was unbelievable how much healing I felt,” Zee recalled. “It was the first time that I said, ‘Here’s who I am, and if you don’t like it, I guess I don’t care,’ and that was so powerful.”

Even as Zee has gotten to a point where she feels confident sharing her story, she said she recognizes that is not the case for everyone, adding that she forges ahead because she wants the “stigma” of mental health treatment to end.

“I think we’ve gotten a lot better about being able to identify and be OK with sharing, ‘I have depression,’ or ‘I have anxiety.’ People say that a lot,” said Zee. “What people don’t say is, ‘I go to therapy,’ or, ‘I had to go to the hospital."”

“When I say, ‘I checked myself into a mental health hospital,’ eyebrows still raise, and that’s OK. I’m OK with people raising their eyebrows around me saying that, because I want that stigma to end.”

For Zee, talking about her hospitalization is especially important, because it was that in-patient treatment, which she sought weeks before she began working at ABC News in 2011, that started her recovery.

How Ginger cares for her mental health today

Just over one decade later, in 2022, Zee said being public about her own mental health struggles has been a constant reminder to her that healing is an ongoing journey, not a destination.

“What writing these books and talking about mental health has done for me is it has said to me, ‘You don’t just heal, and then you’re done. Healing is a constant maintenance,"” Zee said. “Just like physical health, you don’t go and get in sick shape and have a personal trainer for a year and eat right for 12 months and then you stop and everything stays the same. That’s not how it works, and that’s not how it works with mental health either.”

As people make New Year’s resolutions and set goals for 2022, Zee said her hope is that they, “be kind to themselves and work on their mental health first.”

Zee said it helps her to look at coping with mental health as a “lifelong workout” for her brain, explaining, “That’s where I put my energy, my money, my time is in the mental health first, and then all the other stuff falls into place.”

In addition to therapy, Zee said she constantly finds ways to incorporate service, meditation and gratitude into her daily life.

Zee shares five of her centering practices below:

2. Practice meditation: “I try to do yoga and pilates, but with mind meditation within it,” Zee said, adding that she adds in meditation in other practical ways, like when she’s getting a manicure, noting meditation doesn’t have to be thought as something formal that is only done in traditional ways.

“Meditation is the setup of the brain,” she said of its importance. “The personal trainer to me is my therapist, and then there’s the meditation, which is like [doing] the sit-ups.”

4. Recognize that what you’re feeling is a moment in time: “If I could go back in my darkest places and if I could impart one piece of wisdom … I would have said, ‘This is going to feel so different tomorrow,"” Zee said. “It really is. It’s going to feel different the next day, and it might get worse again, and might get better again, but every single moment is fleeting.”

5. Reach out for help: Zee said she has a support system, including her mom and husband, whom she reaches out to immediately when she is having what she calls a “grey day.”

“They know what that means. They know how to support me,” Zee said. “And then from here, I allow myself to have a grey day, and I do everything to support being healthy through that grey day.”

For people who feel like they don’t have support, Zee said there are many safe places and safe people to whom they can say, “I need help,” aloud.

“If you say to someone that you love, or that is a friend, or that is a co-worker even, ‘I think I need some help,’ we’re going to help you,” she said.