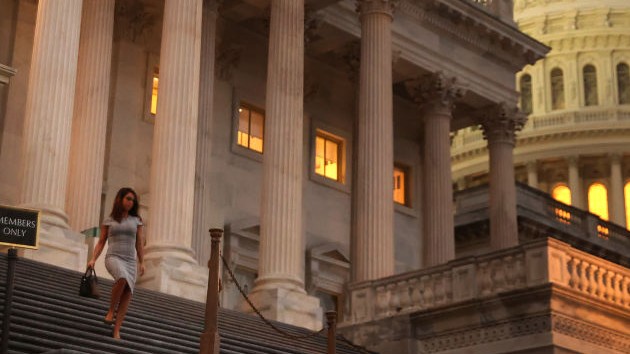 (WASHINGTON, D.C.) — House Progressives, led by Rep. Ayanna Pressley, said Wednesday they will introduce a resolution later in the day seeking to strip GOP Rep. Lauren Boebert of her two committee assignments in the wake of anti-Muslim remarks she made last month about Rep. Ilhan Omar.

Their goal: to force Democratic leadership’s hand in punishing Boebert for repeatedly making Islamophobic and racist comments about Omar, likening her to a suicide bomber.

“I haven’t heard anything binding from leadership, which in and of itself is an embarrassment,” Ocasio-Cortez told the news outlet The Hill on Tuesday night. “This shouldn’t take this long; this should not drag on. It’s pretty simple. It doesn’t have to be a big huge thing. It’s pretty open and closed.”

In a video posted to Twitter last month, Boebert referred to Omar as a member of the “Jihad Squad” and claimed that a Capitol Police officer thought she was a suicide bomber in an encounter in an elevator on Capitol Hill.

Boebert later apologized on Twitter “to anyone in the Muslim community I offended,” adding that she had reached out to Omar’s office to speak with her directly, but the phone call did not go well.

Omar is one of only three Muslim members in Congress. She said she has received “hundreds” of death threats often triggered by Republican attacks.

Leaders had discussed a resolution that would condemn Islamophobia, but House liberals, including Omar herself, are not keen to the idea, saying a resolution doesn’t go far enough.

Democrats have also called on Republican Leader Kevin McCarthy to condemn Boebert himself, but he has not done so.

“It’s the responsibility of Republicans to discipline their members,” Pelosi told reporters Wednesday when asked if she supported the new resolution from progressive members.

“It is my expectation that Lauren Boebert is going to be held accountable,” House Democratic Caucus chairman Hakeem Jeffries told reporters Wednesday during a news conference.

“It would be a constructive thing if my friends on the other side of the aisle would handle their own business in terms of the out of control members. But we haven’t seen that level of accountability so far,” Jeffries said.

“At some point, I think the House as a whole is going to have to act,” he said, adding that “there is no hesitancy on our side” to take action against Boebert.

Late last month, the House voted to censure GOP Rep. Paul Gosar of Arizona over a video he tweeted depicting violence against Democratic Rep. Alexandria Ocasio-Cortez and President Joe Biden. He was also removed from his committee assignments.

Earlier this year, House Democrats also voted to remove GOP Rep. Marjorie Taylor Greene from her committee assignments over what they said were her violent social media posts aimed at Democrats.

But there are concerns among members and staff about creating a messy precedent that would force Democrats to punish any member for making racist or false statements.

It’s unclear if Pelosi will be moved to act given the public outcry and pressure campaign from members. ABC News has reached out to her office for comment.

“For a Member of Congress to repeatedly use hateful, anti-Muslim rhetoric and Islamophobic tropes towards a Muslim colleague is dangerous. It has no place in our society and it diminishes the honor of the institution we serve in,” Pressley said in a statement.

“Without meaningful accountability for that Member’s actions, we risk normalizing this behavior and endangering the lives of our Muslim colleagues, Muslim staffers and every Muslim who calls America home. The House must unequivocally condemn this incendiary rhetoric and immediately pass this resolution. How we respond in moments like these will have lasting impacts, and history will remember us for it,” she said.

Muslim congressional staffers sent a letter this week urging Pelosi to take action against Boebert. The staffers said in a signed letter that they do not feel welcome or safe working on Capitol Hill knowing there are Islamophobic members in Congress who will go unpunished when they make harmful statements.

The letter, obtained by ABC News, was signed by the “Muslim staff of the U.S. House of Representatives and the U.S. Senate” who said that they decided not to include their last names to “avoid potential additional harm.”

It’s unclear how many staffers signed on to the letter.

“Witnessing unchecked harassment of one of only three Muslim Members of Congress – and the only visibly Muslim Member – we feel that our workplace is not safe nor welcome. We must now come to work every day knowing that the same Members and staff who perpetuate Islamophobic tropes and insinuate that we are terrorists, also walk by us in the halls of Congress,” the letter stated.

“Congress must categorically reject this incendiary rhetoric that endangers the physical, mental, and emotional wellbeing of Muslim staff across both sides of the aisle,” the staffers wrote.

Man released after nearly 20 years in prison due to twin confessing to murder
Rifle used by Kyle Rittenhouse in Kenosha shooting to be destroyed
Blizzard conditions headed to Northeast, Boston may face ‘historic storm’
He “loved with everything he had” — Bob Saget’s daughter Lara posts tribute to her dad
Boston risks losing ‘disproportionate’ number of educators of color with city’s vaccine mandate
Alicia Silverstone takes to TikTok to flip off body shamers