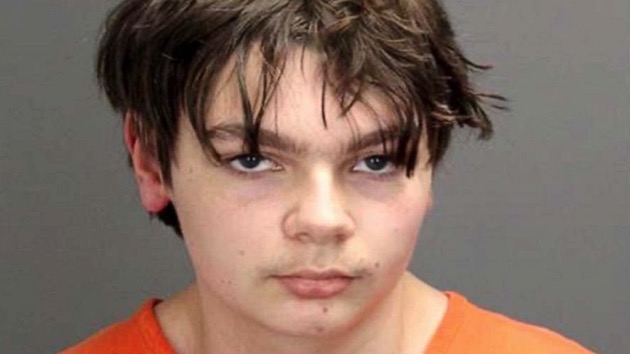 (DETROIT) — The parents of Ethan Crumbley, the 15-year-old who authorities said killed four classmates at his Michigan high school, are still in jail after a judge assigned them each a $500,000 bond on manslaughter charges related to the shooting.

James and Jennifer Crumbley were taken into custody early Saturday after they failed to turn themselves in Friday afternoon for a scheduled arraignment, prompting an hourslong search for the couple. They remained in the Oakland County jail on Sunday and have not posted bail, online jail records show.

The couple was captured in Detroit after a business owner called 911 after spotting the suspects’ car in their parking lot and Jennifer Crumbley standing next to it, according to the Oakland County Sheriff’s Office. She fled the area on foot, but the couple was located in a commercial building in an art studio after an extensive search of the area.

They were “aided in getting into the building,” Detroit Police Chief James White told reporters at a 3 a.m. press conference Saturday, adding that it was “very likely” they were trying to flee to Canada. Oakland County Sheriff Michael Bouchard said his office would be presenting potential charges to the prosecutor’s office against the person who allegedly helped them gain access to the building.

The 65-year-old Detroit artist whose studio Jennifer and James Crumbley used to hide as they allegedly fled authorities on Friday is maintaining his innocence in their movements that day, his attorney, Clarence Dass, told ABC News.

The lawyer for Andzrej Sikora told ABC News on Sunday that the Crumbleys came to Sikora on Friday morning, the day the county leveled charges of involuntary manslaughter against the couple in the Oxford school shooting. The Crumbleys knew Sikora through a ski club, Dass said.

Dass declined to describe the interaction Friday morning and would not say whether Sikora gave the couple keys to the Detroit building that houses his studio. Sikora was not aware the couple was facing charges in the shooting, saying that he “knew what was going on” but wasn’t following the news closely, Dass said.

When Sikora woke up on Saturday and saw the news of the Crumbleys’ overnight arrest, he went to the Detroit Police Department and told them he was the owner of the studio, Dass said. Authorities then directed him to the Oakland County Sheriff’s Office, where he provided information about what he knew, before hiring Dass as counsel.

Sikora has not been arrested and no charges have been filed against his client, Dass said, but he did not rule out the possibility that authorities could charge the artist this week.

Each parent is facing four counts of involuntary manslaughter for what authorities are saying was a failure to properly secure the firearm that was used in the shooting. They have both pleaded not guilty to the charges.

On Tuesday, the morning of the shooting, a teacher at Oxford High School saw a note on Ethan Crumbley’s desk with a drawing of a semi-automatic handgun pointing at the words, “The thoughts won’t stop, help me,” prosecutors said. Another drawing depicted a bullet with the words “Blood everywhere” above it and a drawing of a bleeding person who appeared to have been shot twice, according to prosecutors.

Ethan Crumbley was then removed from class, and his parents, who school officials said were “difficult to reach,” were called to the school.

Ethan Crumbley told school guidance counselors that the drawings were for a video game he was designing, Oxford Community Schools Superintendent Tim Throne said in a statement Saturday. His parents did not indicate that they had recently purchased a firearm for him and led the counselors to believe there was no threat of violence, to himself or to others, Throne said.

It is not clear whether the gun was in Ethan Crumbley’s backpack at the time, Throne added. Due to his lack of disciplinary record, they sent him back to class instead of home, Throne said. His parents were then told that they were required to get their son into counseling within 48 hours.

Hours later, Ethan Crumbley was armed with a 9 mm Sig Sauer pistol his father bought on Nov. 26 as he walked down the hallway, aiming into classrooms, Oakland County Assistant Prosecuting Attorney Marc Keast said during Wednesday’s arraignment. There were 18 live rounds left in the firearm when he was apprehended in the hallway, Bouchard told reporters Wednesday.

Ethan Crumbley has been charged as an adult with four counts of first-degree murder and seven counts of assault with intent to murder — actions that prosecutors allege were premeditated.

Throne has requested a third-party probe to investigate how the school handled the events leading up to the shooting.

“I have personally asked for a third-party review of all the events of the past week because our community and our families deserve a full, transparent accounting of what occurred,” Throne said.

Michigan Attorney General Dana Nessel has also reached out to the Oxford Community Schools to offer help in investiating the shooting and events leading up to it.

“Our attorneys and special agents are uniquely qualified to perform an investigation of this magnitude,” Nessel tweeted.

Wendy Williams not returning to talk show until at least March
Free tax help available for senior citizens in Clearfield County
As experts warn of ‘unfinished learning’ due to COVID-19, here are tips to help kids cope
Alleged Oxford High School shooter, Ethan Crumbley, to claim insanity defense
‘The Fallout’ tackles the trauma of school shootings
California bill would allow kids 12 and up to get vaccines without parents