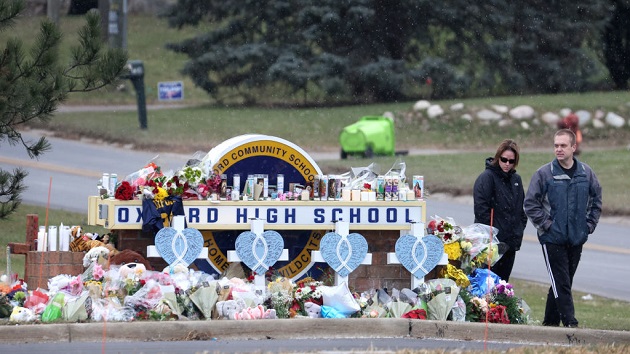 (OXFORD TOWNSHIP, Mich.) — The parents charged in connection with this week’s deadly shooting at Oxford High School in Michigan are returning to town for their arraignment, their attorney said, after detectives announced they were trying to locate the couple.

James and Jennifer Crumbley were each charged Friday with four counts of involuntary manslaughter. Their son, 15-year-old Ethan Crumbley, allegedly used his father’s semi-automatic handgun in the Tuesday shooting that killed four and injured seven.

The attorney told police “she had made repeated attempts to reach them by phone and text without success,” the sheriff’s office said.

Bouchard said, “The action of fleeing and ignoring their attorney certainly adds weight to the charges. They cannot run from their part in this tragedy.”

The couple’s attorneys then said in a statement: “The Crumbleys left town on the night of the tragic shooting for their own safety. They are returning to the area to be arraigned. They are not fleeing from law enforcement.”

In a response to the statement by the attorneys for Jennifer and James Crumbley, the Oakland County Sheriff’s Office said it is not aware that the couple is returning to be arraigned.

“If they are, it’s news to us,” Undersheriff Mike McCabe told ABC News, saying authorities still don’t know where the couple is located.

Earlier on Friday, Oakland County Prosecutor Karen McDonald at a news conference outlined an alarming and violent note Ethan Crumbley allegedly drew hours before the shooting that prompted his parents to be called to the school. She also stressed the importance of responsible gun ownership.

“While the shooter was the one who entered the high school and pulled the trigger, there are other individuals who contributed to this, to the events on November 30, and it is my intention to hold them accountable,” McDonald said.

Ethan Crumbley was with his father when he bought the 9 mm Sig Sauer pistol on Nov. 26, McDonald said. The teen posted photos of the gun on social media, writing, “Just got my new beauty today,” she said. Jennifer Crumbley also posted online about testing the gun out with her son, McDonald said.

A teacher saw Ethan Crumbley researching ammunition in class days before the shooting, the prosecutor said. School officials contacted his parents, but they didn’t respond, McDonald said. However, according to the prosecutor, Jennifer Crumbley texted her son, writing, “lol, I’m not mad at you, you have to learn not to get caught.”

According to McDonald, the morning of Tuesday’s shooting, Ethan Crumbley’s teacher saw an alarming note on his desk. McDonald described the note as “a drawing of a semi-automatic handgun pointing at the words, ‘The thoughts won’t stop, help me.’ In another section of the note was a drawing of a bullet with the following words above that bullet, ‘Blood everywhere."”

Ethan Crumbley was removed from the classroom and his parents were called to the school, McDonald said. By the time a counselor obtained the drawing, the teen had allegedly altered it, McDonald said.

“At the meeting, James and Jennifer Crumbley were shown the drawing and were advised that they were required to get their son into counseling within 48 hours,” she said. “Both James and Jennifer Crumbley failed to ask their son if he had his gun with him or where his gun was located and failed to inspect his backpack for the presence of the gun, which he had with him.”

The parents left school while Ethan Crumbley returned to class, likely with the gun in his backpack, McDonald said.

Once news broke of a shooting at the school, McDonald said Jennifer Crumbley texted her son, “Ethan, don’t do it.”

James Crumbley called 911 to report that a gun was missing from his house and said he believed his son may be the shooter, McDonald said.

McDonald said involuntary manslaughter is “the strongest possible charge that we could prove” against the suspect’s parents.

“These charges are intended to hold the individuals who contributed to this tragedy accountable and also send a message that gun owners have a responsibility. When they fail to uphold that responsibility, there are serious and criminal consequences,” she said.

Ethan Crumbley has been charged as an adult with one count of terrorism causing death; four counts of first-degree murder; seven counts of assault with intent to murder; and 11 counts of possession of a firearm in commission of a felony.

A judge entered a not guilty plea for Ethan Crumbley on Wednesday. His next court appearance is scheduled for Dec. 13.