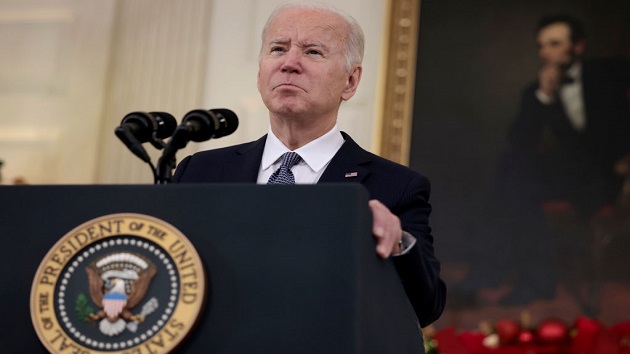 (WASHINGTON) — On the heels of a sluggish November jobs report, President Joe Biden on Friday touted the country’s employment landscape as improving despite there being fewer jobs added last month than economists expected.

“We’re looking at the sharpest one-year decline in unemployment ever. Simply put, America — America is back to work. And our jobs recovery is going very strong,” Biden said in remarks from the White House on Friday morning. “Today’s historic drop in unemployment rate includes dramatic improvements for workers who have often seen higher wages and higher levels of unemployment.”

With Biden sounding congested for the second day in a row, a reporter said his voice sounded “different” and asked the 79-year-old president if he was OK.

“But it’s just a cold,” the president said with a smile.

Friday’s remarks came as concerns climbed over the potential economic and health impacts of the new omicron variant detected in five states so far.

The Labor Department released its report ahead of Biden’s remarks revealing that 210,000 jobs were added in November, the fewest in nearly a year — a number well below economists’ expectations of more than 550,000 jobs.

Biden, instead, focused on the report showing that the nation’s unemployment rate fell sharply from 4.6% to 4.2% — the lowest it’s been since the pandemic began but still higher than the pre-pandemic unemployment rate of 3.5%. Still, he touted the report as “incredible news” and a sign that the economy is “stronger” than it was a year ago.

The president said the unemployment falling more than two percentage points since he took office marked the “fastest decline on record and three times faster than any other president in their first year in office.”

“Even after accounting for rising prices, the typical American family has more money in their pockets than they did last year. In fact, we are the only leading economy in the world where household income and the economy as a whole are stronger than they were before the pandemic,” Biden said.

Despite the progress the president noted, he said he recognizes Americans are still “anxious.”

“But I also know that despite this progress, families are anxious. They’re anxious about COVID. They’re anxious about the cost of living, the economy more broadly. They’re still uncertain. I want you to know I hear you,” he added. “You need to see it and feel it in your own lives around the kitchen table and in your checkbooks.”

To that end, he reiterated his nine-point plan to combat COVID-19 this winter as a way to show that the administration is aiming to protect the economy as the pandemic continues and the new omicron variant spreads.

While he said it’s impossible to “build a wall around America” to keep the virus out, Biden said the new measures he announced Thursday are “sufficient” to deal with the omicron variant, and the White House is not considering any new measures for domestic travel, such as requiring travelers be vaccinated.