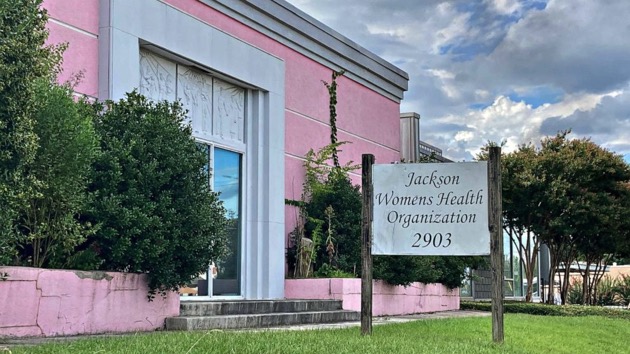 (WASHINGTON) — The U.S. Supreme Court on Wednesday will consider a case that could fundamentally transform abortion rights in America by overturning Roe v. Wade and clearing the way for stringent new restrictions on abortion in roughly half the country.

“This is the most important Supreme Court case on abortion since Roe in 1973, and I don’t think it’s particularly close,” said Sherif Girgis, Notre Dame law professor and former clerk to Justice Samuel Alito.

The justices will hear arguments in Dobbs v. Jackson Women’s Health over a Mississippi law that prohibits termination of pregnancies after 15 weeks. Lower courts have found the ban plainly unconstitutional under the half century of legal precedent since Roe and put it on hold.

Fetal viability outside the womb — around 24 to 26 weeks, according to medical experts — has been the long-standing line before which states cannot ban abortions. Mississippi is asking the justices to eliminate that standard and allow each state to set its own policy.

“Roe v. Wade has hindered a healthy political dialogue about abortion, and perhaps most importantly, about how we as a society care for the dignity of women and children,” said Mississippi Attorney General Lynn Fitch, who is leading defense of the state law.

The case will be heard by a court whose conservative majority of justices is widely viewed as more sympathetic to opponents of abortion rights than any in a generation. The three most recently appointed justices were all elevated to the high court by former President Donald Trump with the express purpose of overturning Roe.

​​”The new crop of quite conservative justices on the court seems to put special stock in how wrong a previous opinion was, and they all think that Roe was very, very wrong,” said Cardozo Law professor and ABC News legal analyst Kate Shaw. “I think that will be an important factor in their decision whether to revisit it.”

The fact that the court decided to take up the case — without a clear conflict among lower courts or ambiguity in legal precedent — suggests to many legal scholars that a decision favoring Mississippi is highly likely.

“The court has long surprised us,” said Shaw, “but it seems to me a vanishingly slim chance that the court will strike down the Mississippi law.”

A decision upholding the state’s 15-week abortion ban would implicitly reverse nearly 50 years of Supreme Court precedent and open the door to state restrictions much earlier in pregnancy.

“You cannot uphold Mississippi’s 15-week ban on abortion and continue the precedent of Roe v. Wade. They’re not compatible,” said Nancy Northup, president and CEO of the Center for Reproductive Rights, which is leading the legal battle against the law. “There is no middle ground.”

Majorities of Americans support the Supreme Court upholding Roe v. Wade and oppose states making it harder for abortion clinics to operate, according to an ABC News/Washington Post poll this month. Three in four Americans, including majorities of Republicans, independents and Democrats, say the decision of whether or not to have an abortion should be left to a woman and her doctor.

University of California, Berkeley Law professor Daniel Farber said the legal options before the court are stark and extreme. “I think between those two options, I think overruling Roe would win the day,” Farber said.

Some abortion law scholars believe the justices may attempt a more moderate approach — at least in appearance — by upholding the Mississippi law while explaining that they are changing, rather than overturning, the standard set by Roe and Planned Parenthood v. Casey.

“The court might say, ‘We are not finding that there’s no constitutional protection for abortion, only that these earlier decisions didn’t give sufficient weight to other kinds of state interests,"” said Shaw. “So, perhaps states may be able to ban abortions prior to viability, but that doesn’t mean they have carte blanche to ban all abortions.”

Mississippi has just one remaining abortion clinic, Jackson Women’s Health, that only provides abortion services up to 16 weeks of pregnancy. The state argues that a ban starting at 15 weeks would not impose a significant burden on most women.

While Americans are broadly supportive of abortion rights, they appear more sharply divided on the type of ban at issue in Mississippi. A Marquette University Law School poll this month found 37% favored upholding a 15-week ban, with 32% opposed.

Overshadowing the case is the Supreme Court’s still-pending decision in a separate dispute over Texas’ unprecedented six-week abortion ban, SB8, which has been in effect for nearly three months and dominated national headlines.

The justices gave the Texas law a highly expedited hearing, during which a majority appeared skeptical of its enforcement scheme that encourages citizens to sue anyone who aids or abets an unlawful abortion for the chance at a $10,000 bounty. Many observers assumed the court would quickly move to put the law on hold, but it has not done so.

Girgis said the delay suggests the justices “hit some snags” in their negotiations and may have decided to resolve the dispute in tandem with the Mississippi case.

“If they end up reversing Casey and Roe, then obviously the question of the constitutionality of SB8 becomes a lot easier,” Girgis said.

In the meantime, access to abortion care for millions of women in the nation’s second-most populous state remains on hold and could be suspended for months longer. The court is not expected to issue a decision in the Mississippi case until June.

“We’re waiting on tenterhooks to hear from the court,” said Northup of Texas law SB8. “But it is just quite unconscionable that we’re so many months in, allowing this law to be in effect when it clearly violates Roe v. Wade.”

Justice Brett Kavanaugh could be the key vote to watch in both cases, analysts said. He sided with the majority more than any other justice last term and notably broke with Chief Justice John Roberts in September to allow SB8 to take effect.

“I think she may have some incentive, certainly not to save Roe, but to take her time in unraveling Roe rather than kind of delivering an immediate death blow,” Ziegler said of Barrett, the court’s newest and youngest member. “We don’t know what Brett Kavanaugh, who is no longer beholden to John Roberts to get the deciding vote, will say about abortion.”

Fourteen states plus Washington, D.C., have laws explicitly protecting access to abortion care, according to Guttmacher.

“If the court follows the rule of law, we will prevail,” Northrup said. “But we are ready to fight on every front if there should be a reversal of Roe.”