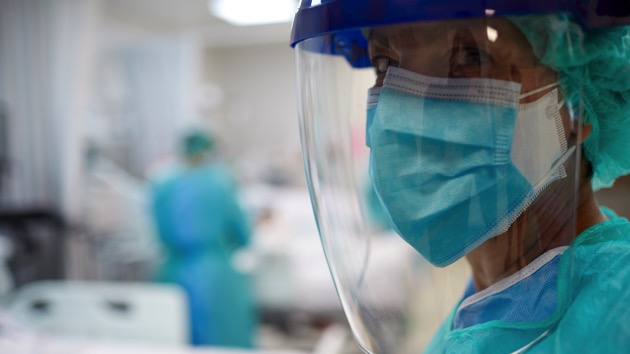 (NEW YORK) — As the COVID-19 pandemic has swept the globe, more than 5.2 million people have died from the disease worldwide, including over 778,000 Americans, according to real-time data compiled by Johns Hopkins University’s Center for Systems Science and Engineering.

Just 59.3% of the population in the United States is fully vaccinated against COVID-19, according to data from the Centers for Disease Control and Prevention.

The FDA in a new statement said it’s working as quickly as possible to evaluate the potential impact of omicron on the currently available diagnostics, therapeutics and vaccines.

“Historically, the work to obtain the genetic information and patient samples for variants and then perform the testing needed to evaluate their impact takes time,’ the FDA said. “However, we expect the vast majority of this work to be completed in the coming weeks.”

The FDA stressed that vaccines, boosters and masks are the best ways to stay protected.

Nov 30, 9:53 am
Passengers arriving in US from South Africa sent home with testing kits

Passengers were told to wait three to five days before collecting a sample that they could then mail back for testing. It’s not clear how many have done so or if any were positive.

More than 200 confirmed cases of the omicron variant, first identified in Southern Africa, have been reported in over a dozen countries around the world, according to an open-source tracker run by Newsnodes and BNO News.

The tracker shows South Africa has the highest tally by far, with 114 confirmed cases, followed by 19 in Botswana; 14 in The Netherlands; 13 in Portugal; 11 in the United Kingdom; five in Australia; five in Germany; five in Canada; five in Hong Kong; four in Italy; two in Israel; two in Denmark; one in the French island territory of Reunion; one in Austria; one in Sweden; one in Belgium; one in Czech Republic; and one in Spain.

So far, no cases have been confirmed in the United States.

Dr. Francis Collins, the director of the National Institutes of Health, is urging Americans to be vigilant in the wake of a new variant of the novel coronavirus that is sweeping the globe.

The World Health Organization has designated omicron as a “variant of concern.” But so much remains unknown about omicron, including whether it causes severe disease and if it is more contagious than delta, which is currently the dominant variant in the United States.

“We’re collecting that information as rapidly as we can, and much credit to our colleagues in South Africa who have been totally transparent about this. We only learned about this one week ago from one of their sequencers,” Collins told ABC News’ Robin Roberts in an interview Tuesday on Good Morning America.

“So we are quickly trying to figure out in South Africa, is this in fact more contagious than other variants? It does look like it’s spreading quite quickly there,” he added. “But we don’t know how that would play out in a country like ours, where delta is already so dominant. Would omicron be able to compete with delta? We don’t know the answer to that.”

Another big question, Collins said, is whether the current COVID-19 vaccines and boosters will provide protection against omicron as they have against previous variants. The answers will “take a couple of weeks” to uncover, he said.

In the meantime, Collins encouraged all Americans to get vaccinated and boosted if eligible, and to wear face masks.

“I wear my mask if I’m indoors with other people — I don’t always know if they’re all vaccinated or not. That’s just good practice,” he said. “I know we’re all tired of this, but the virus is not tired of us and it’s continuing to exploit those opportunities where we’re careless.”

Nov 30, 7:22 am
Omicron variant was in the Netherlands earlier than thought

Dutch health authorities announced Tuesday that they have detected omicron in two previously tested samples, dating back as much as 11 days, indicating that the new variant was already circulating in western Europe before it was first identified in southern Africa.

The Netherlands’ National Institute for Public Health and the Environment said it discovered omicron in samples dated Nov. 19 and Nov. 23, preceding the cases found among people traveling from South Africa to the Amsterdam Airport Schiphol on Nov. 26.

“It is not yet clear whether these people had also visited southern Africa,” the institute said in a statement Tuesday.

Out of 624 passengers returning from South Africa who were tested for COVID-19 at the Amsterdam Airport Schiphol on Nov. 26, 61 tested positive, including 14 with the omicron variant.

“Laboratory tests identified several different strains of the omicron variant,” the institute said. “This means that the people were very probably infected independently from each other, from different sources and in different locations.”

The omicron variant was first reported to World Health Organization from South Africa on Nov. 24.