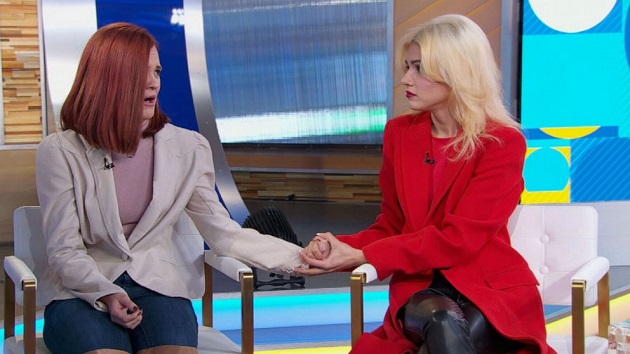 (NEW YORK) — Jordan Turpin said while it was tough to watch her and her sister’s exclusive interview with ABC News’ Diane Sawyer, which aired Friday night on “20/20,” it also made them feel proud.

“It brought back a lot of stuff,” Jordan Turpin, 21, told “Good Morning America” on Monday.

“But I’m just glad that it’s out there,” she added, so “people know that they have a voice and they can speak up if something’s not right. “

The eldest Turpin sibling, 33-year-old Jennifer Turpin, said “there’s always a way out, and I hope people get that from our story. There’s always hope, even if it feels like there’s none.”

In January 2018, Jordan Turpin, then 17, escaped from her Perris, California, home, freeing herself and her 12 siblings from a life of horrific abuse and captivity at the hands of their parents, who beat, shackled and starved their children.

David and Louise Turpin later pleaded guilty to charges including torture and false imprisonment. In 2019, they were sentenced to 25 years to life.

Jordan and Jennifer Turpin told their story for the first time in an exclusive interview with Sawyer. The Diane Sawyer special event, “Escape From A House Of Horror,” is now streaming on Hulu .

Jennifer Turpin, who helped her sister prepare for the escape, said she was “so proud” of Jordan while watching the Sawyer interview, and able to hear Jordan’s harrowing 911 call and see her conversation with the responding officers via body camera.

“I think that’s why I cried the hardest,” she said. “I couldn’t have been more proud.”

Jordan Turpin said the support they’ve received from the public “means so much to me.”

“My whole life I thought that I didn’t matter and I wasn’t loved,” she said. “I’ve always had my siblings and only my siblings. So when I see other people care about me, I don’t even know what to think. It’s hard for me to process.”

But an ABC News investigation found that some of the Turpin children continue to face challenges and hardships since they were rescued and placed in the care of the county. Some of them have even faced assault and alleged child abuse again.

Jennifer Turpin is working at a local restaurant and is writing Christian pop music she hopes to share with the world. She also dreams of being a published author.

“I have my own place, I recently got a car,” she said. “I have an adorable kitty cat and bunny. I love my job, even when it gets hard.”

Jordan Turpin received her high school diploma in one year and is now taking college classes. She said she hopes to become a motivational speaker.

“My whole life has been so hard for me to understand why, you know, why everything has happened,” Jordan Turpin said. “If I can use what I went through to make a difference in the world, then I think that can heal me.”