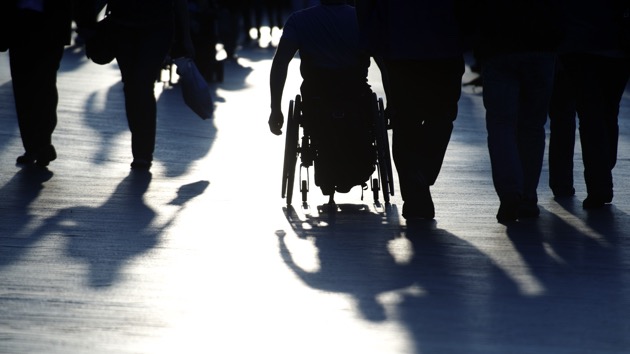 (NEW YORK) — Disabled people are disproportionately victims of violent crime and victimization in the United States, according to new data released by the Bureau of Justice Statistics. And the frequency of these crimes is also increasing, according to the data, though activists don’t seem to know why.

The data shows that from 2017-2019 disabled people accounted for 26% of nonfatal violent crimes, even though they make up only 12% of the population and are victims of violence at almost four times the rate of non-disabled people.

For disabled women, the disparity is even greater and the prospect of victimization seems almost inevitable to some, activists say. The data also shows the ongoing prevalence of domestic and intimate partner violence against disabled women, and activists say it showcases the failings of a system that wasn’t built for the well-being of disabled people.

Stefanie Lyn Kaufman-Mthimkhulu, the executive director of non-profit disability advocacy group Project LETS, is a survivor of sexual violence herself and was sexually assaulted by a friend as a senior in college.

She said she didn’t report the 2017 incident partly because she thought her history in psychiatric institutions and her mental illness would have made it difficult to hold her abuser accountable.

“I’ve seen [the legal system] tear people apart,” Kaufman-Mthimkhulu said. “And I don’t think I could have handled it. That’s the reality that we’re up against, particularly for folks who have psychiatric histories, who are intellectually disabled.”

Now, she works as a disability justice organizer in order to help try to curb attacks on disabled people like herself.

It’s an uphill battle, according to activists — with a lack of research into violence at institutions, a mistrust in law enforcement among the community, poverty and overrepresentation in the criminal justice system.

Ableism in our systems and communities

Activists say that ableism — the discrimination or bias against disabled people — is at the root of this disparity and that misogyny puts women in greater danger.

“A lot of people don’t actually see [disabled people as] full human beings that are capable of autonomous decision making,” Kaufman-Mthimkhulu said. “We’ve all been conditioned in a way that allows for this belief that disabled people are inferior, are weaker than others. That we should be grateful for any form of attention, or love, even if that comes in the form of abuse.”

Not only are disabled people seen by some as “less than,” but activists at the National Coalition of Latinxs with Disabilities — or CNLD in Spanish — also say that various forms of ableism affect the social, political and economic standing of disabled people in the U.S.

In the report, BJS researchers and law enforcement agencies concede that the number of crimes actually committed against disabled people is likely to be higher than what is reported.

BJS cites a number of issues in its data collection which is based on the annual self-reported survey response collection followed by interviews hosted by the U.S. Census Bureau. The BJS says this research lacks input from institutionalized people, 54% of whom have a disability, and the interviewing and surveying methods that contributed to this dataset may be inaccessible to get accurate or full responses from disabled people.

“The data focuses on individuals who are not institutionalized, and there is a lot of violence that is being experienced by those who are institutionalized that’s not being acknowledged or investigated,” Torres-Gerald said.

Though recent research into this topic is limited, one 1994 study from the Behavioral Interventions journal found that about 82% of all cases of abuse and neglect of adults with developmental disabilities were carried out in institutions or group homes and that people who “were unlikely or unable to report or resist the abuse were the most common victims.”

The data also did not break down the differences between racial, ethnic and gender groups.

Crime reporting statistics law enforcement agencies have also proven to be inaccurate due to undereporting, according to the Office for Victims of Crime. Barriers to financial or physical independence, as well as social and economic injustices keep crimes against the disabled in the dark, activists say.

Challenges for women and the poor

It’s also often difficult for disabled people, particularly women, to leave abusive care or to report abuse, according to Centers for Disease Control and Prevention researchers.

For instance, disabled people may be financially or physically dependent on an intimate partner. They also may not be able to report because they can’t communicate or are unable to access a phone, activists say.

The National Disability Institute found that disabled people can often be limited in either their ability to work or ability to get a job due to inaccessible workplaces — and are more likely to experience poverty than non-disabled people.

If they rely on Supplemental Security Income, there are limits on their income and restrictions on their financial assets: disabled people often can’t own more than $2,000 in countable cash at a time in order to receive benefits, the Social Security Administration (SSA) website states, leaving them in a position of being financially dependent on others or in poverty.

And if they are married, they may be disallowed of disability benefits like Social Security benefits and Medicaid due to their partner’s income, according to the SSA.

But there are other forces of inequality at play as well, including the people to whom disabled people would report crimes.

Mistrust in law enforcement by some

A mistrust in law enforcement also keeps some from reporting to police, according to Kaufman-Mthimkhulu. Disabled people are often over-criminalized and over-represented in detention facilities; in 2016, nearly 2 in 5 state and federal prisoners had at least one disability, according to the BJS. In 2017, a study by Cornell University found that disabled people were also more likely to be arrested when interacting with police than their non-disabled counterparts.

And, according to research by disability research organization the Ruderman Family Foundation, almost half of people killed by police have some kind of disability.

For some activists, these findings aren’t shocking — but they are a warning sign that systemic and interpersonal violence against disabled people go hand-in-hand. Without accountability for hurdles and red tape against the financial and social success of disabled people, activists say,

“[Lawmakers must focus on] increasing funding and community interventions to better support and create services for survivors that can help build trust within a community for survivors to know that there’s a place for them to go and receive the support they need,” Catalina Galvan, CNLD’s treasurer said.

Tom Holland, Tobey Maguire, and Andrew Garfield unite for a video interview about ‘Spider-Man: No Way Home’
What to expect from more grocery store price hikes, products impacted
In Brief: ‘Succession’ takes all categories in Directors Guild noms for drama; ‘Downton Abbey’ movie moves, and more
COVID-19 live updates: US deaths increasing to highest point in nearly one year
California bill would allow kids 12 and up to get vaccines without parents
Michael Ealy dishes on Netflix dark comedy ‘The Woman in the House Across the Street from the Girl in the Window’: ‘It is a satire’