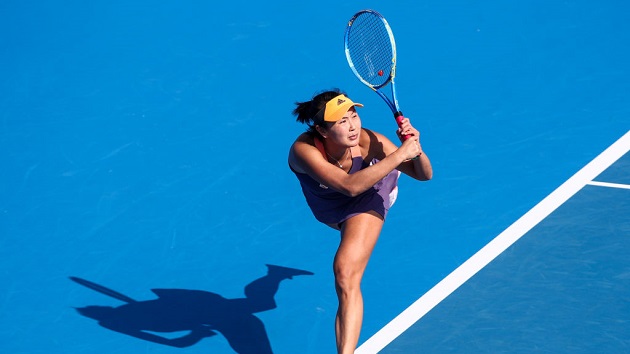 The United Nations called for an investigation into her allegations and whereabouts on Friday. Some of the biggest names in the international tennis world — from Naomi Osaka to Serena Williams — have also lent their voice to the global search for the former Grand Slam doubles champion, using the hashtag #WhereIsPengShuai.

Purported evidence emanating from Chinese state-run news outlets that attempts to confirm her safety — and backtrack sexual assault claims — seem to have only resulted in more global skepticism about her whereabouts, and put the Chinese government’s internet and media censorship policies under renewed international criticism.

Here is what we know and don’t know about the mysterious public retreat of the 35-year-old Chinese tennis star, amid growing international calls for her proof-of-life.

Who is Peng Shuai?

Peng gained international acclaim in the tennis world after winning titles at Wimbledon in 2013 and the French Open in 2014. She was formerly ranked No. 1 globally in women’s doubles.

In a lengthy post on her verified account on Weibo, a popular Chinese social media platform, Peng accused Zhang Gaoli, the former vice premier of the Chinese Communist Party, of sexual assault and said she had a yearslong affair with him.

The post disappeared within minutes of being shared on Nov. 2, but screenshots of it have been circulating online in the weeks since.

“I have no evidence, and it is impossible to leave evidence at all. … You are always afraid of what recorder I bring, leaving evidence or something,” Peng wrote. “But even if I become like an egg hitting against a rock and like moths extinguished in the flame, I will tell the truth about you.”

When was she last heard from publicly?

Peng’s account apparently disappeared from Weibo shortly after her post, and she hasn’t been heard from publicly since until an email, allegedly written by her, was shared by Chinese state-run media.

The screenshot of the purported email opens with, “Hello everyone this is Peng Shuai,” and says that the allegation of sexual assault is not true. “I’m not missing, nor am I unsafe. I’ve just been resting at home and everything is fine,” the text of the note, posted by CGTN Europe, states.

ABC News cannot independently confirm that Peng penned the email broadcast by the state-run news outlet, and the WTA’s Simon said he has a “hard time believing that Peng Shuai actually wrote the email.”

“The statement released today by Chinese state media concerning Peng Shuai only raises my concerns as to her safety and whereabouts,” Simon said in a statement to ABC News on Wednesday. “I have a hard time believing that Peng Shuai actually wrote the email we received or believes what is being attributed to her.”

“Peng Shuai displayed incredible courage in describing an allegation of sexual assault against a former top official in the Chinese government. The WTA and the rest of the world need independent and verifiable proof that she is safe,” Simon added. “I have repeatedly tried to reach her via numerous forms of communication, to no avail.”

Simon called for Peng to be allowed to speak freely and for her allegation of sexual assault to be investigated with “full transparency and without censorship.”

On Thursday, Chinese Foreign Ministry Spokesperson Zhao Lijian dismissed questions about Peng’s whereabouts at a briefing, saying, “This is not a foreign affairs matter. And I am not aware of the relevant situation you mentioned.”

On Friday, after the email screenshot seemed to raise more questions than answers, a journalist affiliated with state-run CGTN tweeted three photos he said were posted by Peng Shuai to her private WeChat account and claimed they were shared by the tennis star’s friend.

Rather than address the concerns about her safety and well-being, the tweet said Peng only included the caption “Happy weekend” and a smiley emoji. While the state-media tweet said the photos were “just posted,” it is impossible to confirm when the photos were taken.

How is the international community responding?

The United Nations on Friday called for an investigation into Peng’s allegations of sexual assault.

“As you know, according to available information, Peng, the former world double No. 1, hasn’t been heard from publicly since she alleged on social media that she had been sexually assaulted,” Liz Throssell, the spokeswoman for the U.N. High Commissioner for Human Rights, told reporters. “We would stress that it is important to know where she is and you know, her state, know about her well-being.”

Earlier this week, as the hashtag #WhereIsPengShuai trended on social media, Amnesty International called on China to prove Peng is safe.

“The Chinese government has systematically silenced the country’s #MeToo movement. Given that it also has a zero-tolerance approach to criticism, it is deeply concerning that Peng Shuai appears to be missing after accusing a high-ranking former government official of sexual assault,” Amnesty International’s China Researcher Doriane Lau said in a statement.

“Peng’s recent so-called statement that ‘everything is fine’ should not be taken at face value as China’s state media has a track record of forcing statements out of individuals under duress, or else simply fabricating them,” Lau added. “These concerns will not go away unless Peng’s safety and whereabouts are confirmed.”

Four things to know about omicron and holiday travel, gatherings
Head of Instagram to face Senate panel over potential harms for young users
Thousands of migrants remain near border of Guatemala waiting for asylum cases to be processed
Boebert draws backlash for family Christmas photo of kids posing with guns
E! People’s Choice Awards 2021 — The winners
The “snot”-so-fun joys of parenthood, according to Katy Perry and Orlando Bloom