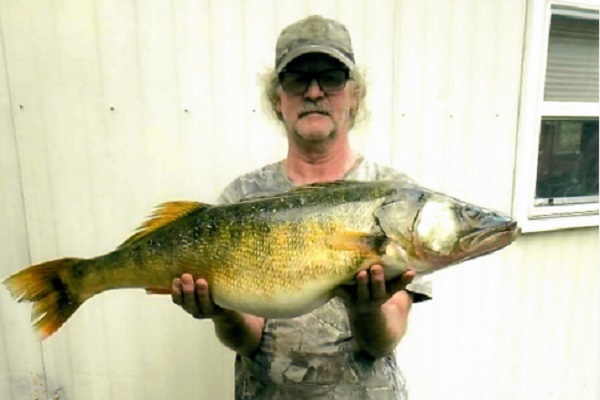 Fayette County, PA – Pennsylvania has a new state record Walleye! The Pennsylvania Fish and Boat Commission says that 62-year-old Richard Nicholson from Fayette County had been fishing along the bank of the Youghiogheny River with his son on Oct. 28.

He said the day started with them catching some other very large fish, but it was only the beginning of what he calls the best day ever. Nicholson eventually reeled in a Walleye that weighed in at 18 pounds and 1 ounce, which is 2 ounces heavier than the previous record from 1980.

On the evening of October 28, 2021, angler Richard Nicholson, 62, of Connellsville, Fayette County, was fishing from the bank of the Youghiogheny River along with his son, Richard Nicholson, Jr.  The father and son both live nearby and frequent the section of the river near the Crawford Street bridge in sight of the Connellsville Police Department.

Nicholson was targeting Walleyes using a spinning reel equipped with 6-pound test and a live creek chub attached to a number two hook, weighted down with bb-size split shot and a slip sinker.

“We were fishing the bottom along the edge of a sandbar, just having a nice time being on the river,” said Nicholson.  “Conditions were good, and we were catching fish right away.  Before we knew it, we landed a big Sauger and then a 27-inch Walleye that weighed about nine pounds.  It turned out it was only the start of the best day ever.”

Nicholson continued to fish the same hole, when at around 6:45 p.m., he recalled his son yelling to alert him that something was tugging hard on his fishing line.

“I looked over and the rod had really taken a bend, so I grabbed it and just started reeling,” said Nicholson.  “I knew right away it was something big, and I thought maybe it was a musky.  It fought me for about 25 minutes before I got it up on the bank and my son got it in the net, and we could see it was a Walleye.  It was so big that it actually broke the net.”

Larger than any previous catches that evening, the fish measured 34 inches, with a girth of 21.5 inches. 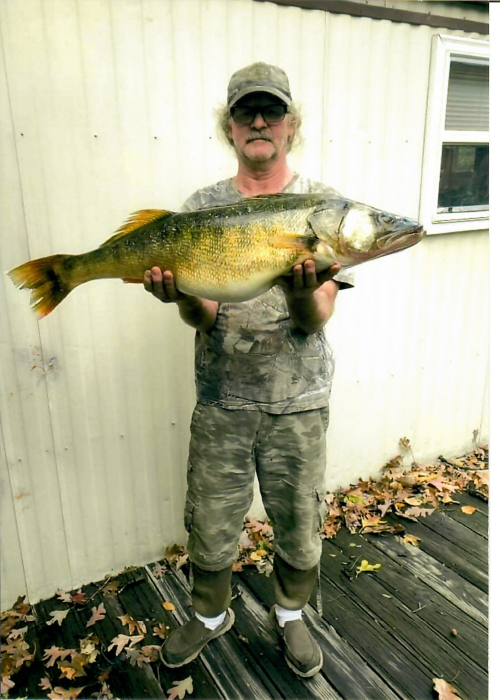 Nicholson, who describes himself as a “meat eater,” says he was thinking more about fish filets than the record books when he put the large Walleye into a five-gallon bucket with some water in an attempt to keep it alive until he could get it home.  The fish survived a short drive to his residence, where Nicholson placed the Walleye into his spring fed live well normally used to keep minnows, or to hold fish overnight after a late night of fishing, before cleaning them the next morning.

“We had the fish home when my son looked up the state record, and said, Dad, we better get this thing weighed,” recalled Nicholson.

By the next morning, the Walleye had expired, and Nicholson took the fish to a nearby grocery store where he had it weighed on a certified scale.  Tipping the scales at 18 pounds, 1 ounce, Nicholson’s fish appeared to beat the 41-year-old record held by angler Mike Holly of Bradford, Warren County, who had caught a 17 pound, 9 ounce Walleye from the Allegheny Reservoir in 1980.  In accordance with PFBC State Record Fish Application Rules, state record fish are recognized only by weight, and must exceed the previous record by at least two ounces.

Waterways Conservation Officer Scott Opfer met Nicholson at the angler’s residence in Connellsville where a visual inspection of the fish was conducted, verifying the species, weight, and measurements.  Nicholson completed an official Pennsylvania State Record Fish Application and submitted it to the PFBC for review, and the record was verified.

“It’s really unbelievable that with so much big water all across this state, including the big rivers and Lake Erie, that this fish was right here in the Yough,” said Nicholson.  “There’s a lot of pride in that, and I’d bet there are a lot more records in that river if people would fish it harder.  Like I said before, I like to eat fish, so I wasn’t after the record, but if this inspires somebody else to get out there and fish, then it’s all worth it to me.  We need more people out there fishing.  That’s what it’s all about.”

Nicholson says he will keep the fish frozen until a taxidermist can produce a molded replica of his record catch, and that that he intends to share the meat with friends and family.

A list of current Pennsylvania State Record Fish, official rules and application can be found at www.fishandboat.com.