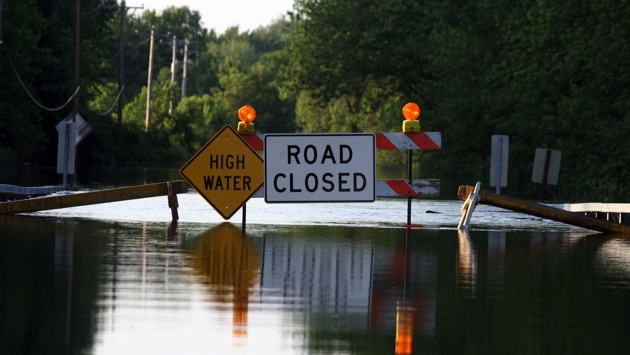 (NEW YORK) — Over 8 inches of rain pummeled the Pacific Northwest in 48 hours, triggering rivers — and then homes — to flood.

In Whatcom County, Washington, in the northwest part of the state along the Canadian border, about 500 people were displaced Monday due to flooding, the Whatcom County Sheriff’s Office said.

“Extensive search and rescue efforts” were conducted throughout Monday, including by boat to reach residents in deep areas, the sheriff’s office said.

In Bellingham, in Whatcom County, the flooding and mudslides closed Interstate 5 overnight.

Flooding also shuttered Highway 5 in British Columbia, with one official calling the conditions “a disaster waiting to happen.”

High winds — with gusts up to 77 mph — toppled trees and knocked out power. An 18-wheeler was nearly knocked off a bridge.

Tuesday morning, the rain and snow showers will begin to taper off, with conditions improving by the afternoon. But major river flooding will still be an ongoing threat, and a flood watch remains in effect through Tuesday afternoon in parts of western Washington.

The Skagit River in Mount Vernon is experiencing major flooding. The river is expected to rise to a crest of 37.6 feet by Tuesday afternoon, topping the 1990 record crest of 37.4 feet.

A winter weather advisory is also in effect; over 1 foot of snow possible in the highest elevations — above 1,500 feet — in western Washington.