(WASHINGTON) — In a memo never before made public, the Presidential Personnel Office under the direction of John McEntee, a favorite aide of former President Donald Trump, made a case for firing then-Secretary of Defense Mark Esper three weeks before Esper was terminated, according to reporting in a new book by ABC News Chief Washington Correspondent Jonathan Karl.

The contents were first reported by Karl in The Atlantic for an article adapted from his forthcoming book, “Betrayal: The Final Act of the Trump Show.”

The memo from McEntee’s office, dated Oct. 19, 2020, provides what Karl calls a remarkable window inside the thinking of the Trump White House during the final months of his presidency and the power held by the then-29-year-old director of the Presidential Personnel Office.

It includes bullet points outlining what Karl calls Esper’s “sins against Trumpism,” including that he “barred the Confederate flag” on military bases, “opposed the President’s direction to utilize American forces to put down riots,” “focused the Department on Russia,” and was “actively pushing for ‘diversity and inclusion."”

Three weeks later on Nov. 9, 2020, Karl says, Trump fired Esper in precisely the way McEntee recommended and replaced, as recommended, by Christopher Miller. The firing also came two days after Trump lost reelection and as the former president was expected to purge top members of his administration with whom he had long been unhappy. 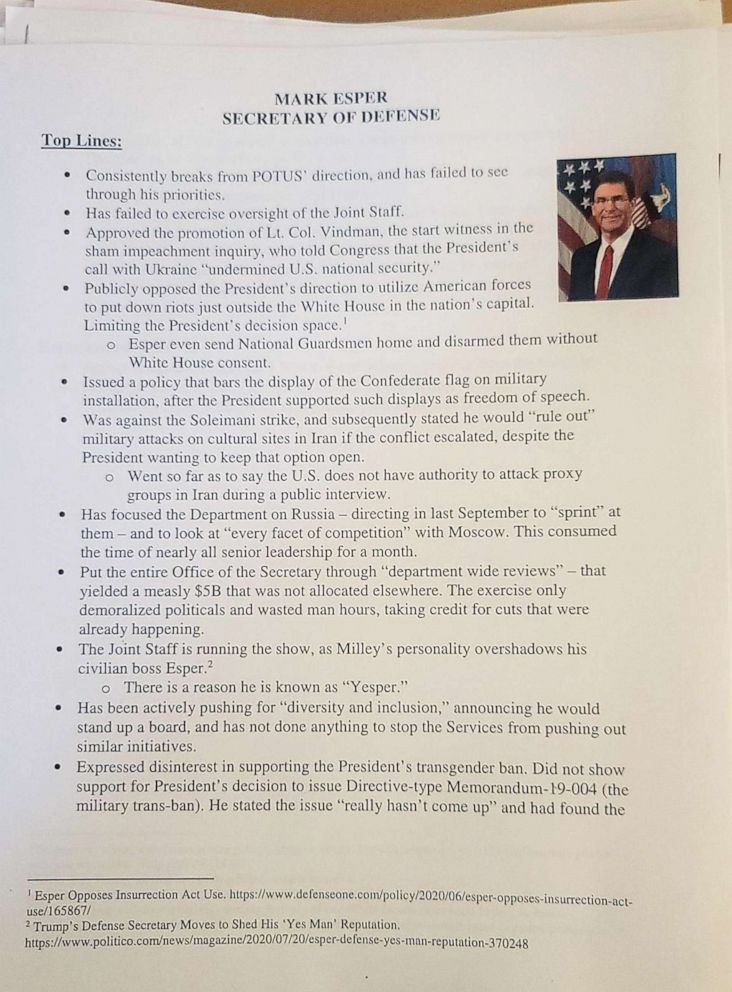 Esper’s termination was made official with a terse two-sentence letter dated Nov. 9 and signed by McEntee that has also, until now, never been made public.

The Presidential Personnel Office, what Karl describes as a normally under-the-radar group responsible for the hiring and firing of the roughly 4,000 executive branch appointees, transformed into an internal police force in the final year of the Trump administration, with employees scouring for acts of dissidence in their ranks.