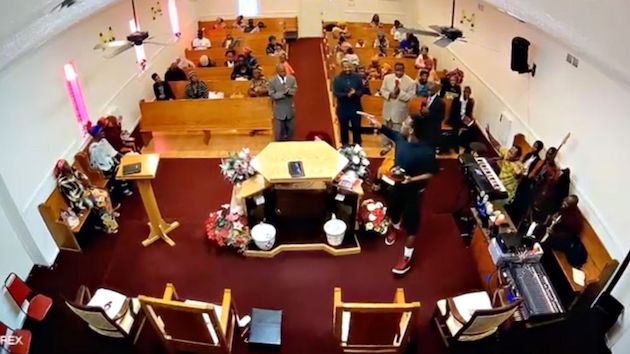 (NASHVILLE, Tenn.) — Police are hailing a Nashville, Tennessee, pastor as a hero after he tackled a gunman at the church altar.

Dezire Baganda, 26, was sitting at the front of the Nashville Light Mission Pentecostal Church on Sunday when he allegedly took out a gun and headed to the altar where the pastor was praying with congregants, the Metropolitan Nashville Police Department said.

Surveillance video showed the suspect waving the gun and pointing it at worshippers. Police said Baganda told everyone to get up.

The pastor quickly tackled Baganda, police said, and several church members jumped in to help take away the gun.

No shots were fired, police said.

“The heroic actions of a local pastor and several of his parishioners saved a church from further violence,” police said in a statement.

Baganda was not a church member but had been to services there before, according to the pastor.