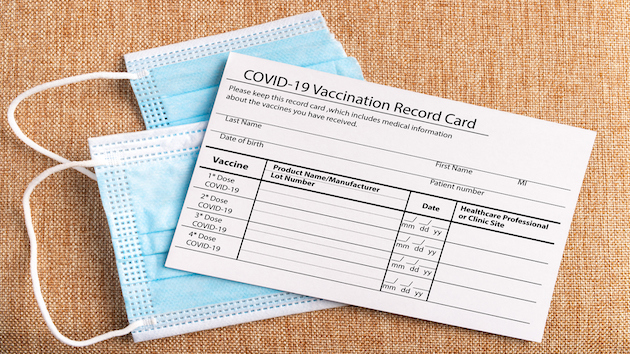 (NEW YORK) — As first lady Jill Biden prepared to kick off a vaccination campaign for kids ages 5-11 on Monday, over the weekend “Sesame Street” mainstay Big Bird tweeted he received his first dose, encouraging children across the country to do the same.

“I got the COVID-19 vaccine today! My wing is feeling a little sore, but it’ll give my body an extra protective boost that keeps me and others healthy,” the eight-foot-two canary yellow Muppet wrote on Twitter Saturday.

I got the COVID-19 vaccine today! My wing is feeling a little sore, but it’ll give my body an extra protective boost that keeps me and others healthy.

Ms. @EricaRHill even said I’ve been getting vaccines since I was a little bird. I had no idea!

President Joe Biden responded to the tweet, writing “Good on ya, @BigBird. Getting vaccinated is the best way to keep your whole neighborhood safe.”

The social media announcement sparked conservative backlash, including from Sen. Ted Cruz, R-Texas, accusing Big Bird of being used to for “government propaganda.”

The tweet from the TV favorite, who is said to be always 6 years old, is part of the administration’s big push to get kids vaccinated against COVID-19 following the Food and Drug Administration’s full authorization of the shot for kids as young as 5 years old. The first lady will visit an elementary school with Surgeon General Vivek Murthy on Monday to promote the pediatric vaccinations.

Big Bird’s announcement came the same day as the icon participated in a CNN town hall alongside his “Sesame Street” neighbors Elmo and Rosita called “The ABCs of Covid Vaccines,” where they answered kids’ questions about the vaccine with CNN’s Dr. Sanjay Gupta and anchor Erica Hill.

Cruz has received the COVID-19 vaccine himself but says he is against vaccine mandates. The Texas senator continued to criticize Big Bird’s announcement on Twitter.

Big Bird coming over to vaccinate your kids. pic.twitter.com/LQODCO3GKg

In response to ABC News’ request for comment, Cruz’s office pointed to previous tweets from the senator encouraging parents to make their own decision regarding their children’s health.

This is not the first time the “Sesame Street” character has weighed in on vaccines for children. After Cruz accused the administration of using Big Bird to spread “propaganda,” a 1972 “Sesame Street” clip showing Big Bird lining up for the measles vaccine began gaining traction online.

Others came to the Sesame Street character’s defense. Former President Donald Trump’s niece and one of his frequent critics, Mary Trump, defended Big Bird and pointed out Cruz’s vaccination status.