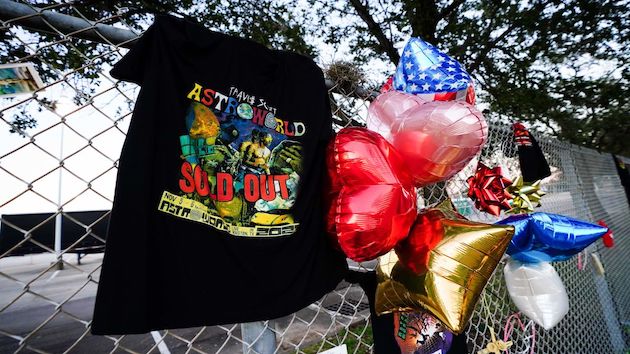 (HOUSTON) — It took just minutes for a crowd of concertgoers to transform into a deadly melee that killed several people during the Astroworld music festival.

Rapper Travis Scott, the founder of the festival, which is named after his 2018 album, continued to perform as multiple people in the audience suffered medical emergencies.

Eight people died in the chaos after the crowd, filled with 50,000 people, rushed toward the stage during Scott’s set. Dozens more were transported to the hospital with injuries.

Scott has a history of inciting crowds at performances and was charged for it twice in recent years.

Here is how the tragedy at the Astroworld Festival unfolded:

Scott was arrested on charges of inciting a crowd to jump barriers at the Lollapalooza festival in Chicago. He pleaded guilty to disorderly conduct and paid a fine, according to officials.

Scott was arrested in Rogers, Arkansas, after prompting fans at the Walmart Music Pavilion to breach barricades and overrun security. He pleaded guilty to misdemeanor disorderly conduct and paid a fine.

The inaugural Astroworld Festival took place in Scott’s hometown of Houston at the 350-acre NRG Park.

Around 9:30 p.m.: The crowd “began to compress toward the front of the stage,” Houston Fire Chief Sam Peña told reporters.

San Antonio resident Fatima Munoz, 21, described a “domino effect” that took place: “I had fell right on the floor, and that’s when everybody started tumbling down, and I tried so hard to get up,” she said on ABC News’ podcast “Start Here.” “There’s just too much people like on me, like those legit dog pile on me. I was on the floor. Nobody helped. I tried screaming for my life. I tried screaming for help.”

Scott continued his set. In the middle of his performance, Scott stood and told the crowd, “Somebody passed out right here,” an Apple Music livestream of the event showed.

Some 300 people were treated by medical personnel on site, authorities said. Another 25 were transported to the hospital.

The remainder of the festival was canceled.

Scott released a statement on Instagram, saying he was “absolutely devastated by what took place” the night before.

The first lawsuit against Scott was filed in Harris County, Texas.

Kylie Jenner posted to her Instagram story that Scott was not aware of any fatalities and would have not continued performing had he known.

Houston Police Chief Troy Finner had previously expressed concerns when he met with Scott and his head of security to discuss the main event, Finner said in a statement.

Scott announced he will provide full refunds for all attendees who bought tickets to Astroworld and that he will not perform at the Day N Vegas Festival this upcoming weekend, sources said.

The FBI is providing “some forms of technical assistance” to investigators in Houston, FBI Director Christopher Wray said Monday at a Department of Justice news conference when asked by ABC News Chief Justice Correspondent Pierre Thomas whether the bureau was involved.

Identities of all of the victims were released. A prayer vigil for the victims was held at the Annunciation Catholic Church in Houston.

“Wookiee welcome”: Widow of Chewbacca actor Peter Mayhew welcomes new actor into the furry fold
Michael Ealy dishes on Netflix dark comedy ‘The Woman in the House Across the Street from the Girl in the Window’: ‘It is a satire’
SpaceX rocket segment on course to hit the moon
‘Tyler Perry’s A Madea Homecoming’ trailer, Serena and Venus Williams honored by the Smithsonian Institute, and more
Dwayne Johnson put in the work to get his big screen ‘Black Adam’ bigger than he is in the comic books
‘Don’t Weigh Me’ cards designed to empower people to skip the scale at the doctor’s office