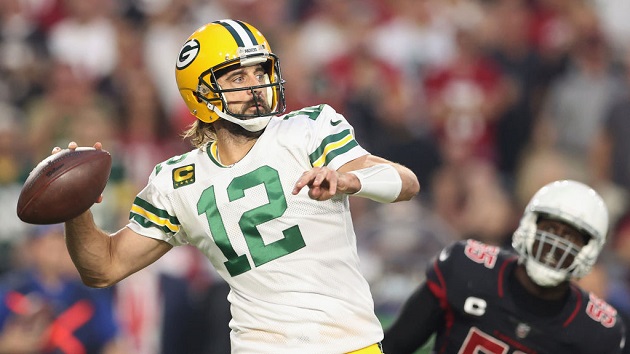 (GREEN BAY, Wis.) — Green Bay Packers quarterback Aaron Rodgers will miss this Sunday’s game against the Kansas City Chiefs after being put on the NFL’s COVID-19 list, the team said.

Packers head coach Matt LaFleur told reporters during a press briefing Wednesday afternoon that he is unsure how long Rodgers, 37, will be out beyond this week, and that backup ﻿quarterback Jordan Love﻿ will start at Kansas City in his place.

LaFleur said he couldn’t comment on whether Rodgers tested positive for COVID-19 and was unsure if the athlete is experiencing any symptoms. He also wouldn’t confirm whether Rodgers was vaccinated against COVID-19.

“I think everybody has to make their own personal decision, and that’s just what it is,” the coach said.

The announcement sparked some confusion around Rodgers’ vaccination status.

ESPN reported Wednesday that the reigning NFL MVP purportedly petitioned the NFL to have an alternative treatment allow him to be considered vaccinated.

The league ultimately ruled that Rodgers would not be considered vaccinated, according to ESPN. However, Rodgers has not been wearing a mask while in-person at news conferences. The Packers has put unvaccinated players on Zoom during media sessions, ESPN reported.

In August, Rodgers responded that he’s been “immunized” when asked about his vaccination status during a media session.

“You know, there’s a lot of conversation around it, around the league, and a lot of guys who have made statements and not made statements, owners who have made statements,” Rodgers said at the time. “There’s guys on the team that haven’t been vaccinated. I think it’s a personal decision. I’m not going to judge those guys. There are guys that’ve been vaccinated that have contracted COVID. It’s an interesting issue that I think we’re going to see played out the entire season.”

From Oct. 3 to 16, the most recent COVID-19 reporting period from the NFL, there were 14 new confirmed positive tests among players and 26 among personnel, with an overall incidence rate of 0.6%.