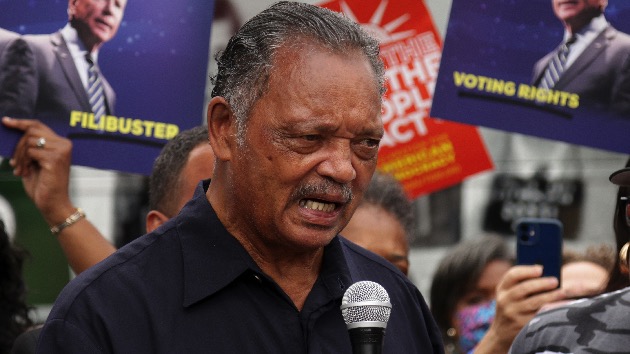 Jackson, 80, has joined demonstrators several times since the protests started on Oct. 12.

In a tweet, Howard University said: “While meeting with various administrators, including Dr. Wayne Frederick, Rev. Jackson sustained an injury upon entering the Blackburn Center. Our thoughts and prayers are with Rev. Jesse Jackson and his family at this time.”

The university said Jackson was taken to the hospital by a university administrator and was later joined by Frederick, who is the university’s president.

Students at the HBCU are sleeping outdoors in tents to protest “poor” and “unlivable” conditions in the college dormitories. Students told ABC News that the residential buildings are plagued with mold, insect and rodent infestations, leaks and flooding.

The Howard University Division of Student Affairs acknowledged in an email to students that select residence halls have been affected but claimed the problems were not widespread.

“There are students whose belongings were lost, or have been destroyed by floods, by mold, by all types of insufficient living conditions and it’s hurtful,” Redding said. “Even if you’re not the person who is experiencing that, just listening and taking it in, with us being a community, it’s very hurtful to hear.”