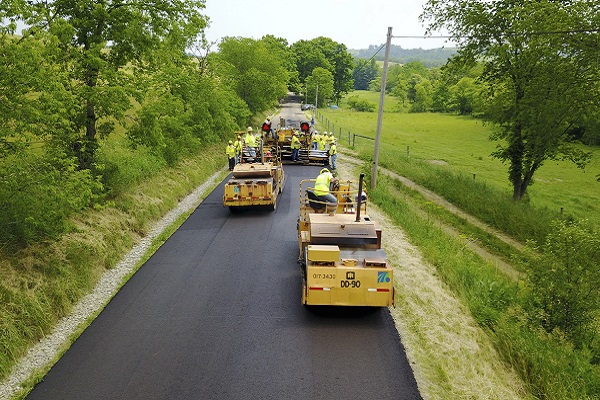 File photos of roadwork.
Posted on October 27, 2021 by wcednews

Harrisburg, PA – How are agriculture and transportation related? Pennsylvania official took a moment to remind the public about how important smaller, more rural roads are, especially since they are frequently used by farmers and other agriculture-related motorists.

The secretaries from the state Departments of Agriculture and Transportation (PennDOT) highlighted their industries’ link to each other and the state economy.

PennDOT Secretary Yassmin Gramian also discussed progress on the department’s Road Maintenance and Preservation (Road MaP) initiative, which included improvements on lower traffic roadways like those used by much of the state’s agriculture industry.

“We need reliable transportation solutions at the federal and state levels to keep our economy moving and to support the roadways that connect our farmers and our communities,” Gramian said. “We’ve been forced to move funding from lower-traffic roadways to interstates or other high-traffic roads, and we’re doing what we can to address this problem.”

Twenty-six percent of the PennDOT-owned roads that aren’t Interstates or on the National Highway System are rated as “Poor” on the International Roughness Index. On roadways with the least amount of traffic (fewer than 2,000 vehicles) that number increases to 33 percent.

There are 21,000 miles of PennDOT-owned, low-volume bituminous roadways maintained with seal coating (oil and chip) and resurfacing, mostly in rural areas. Due to available resources, 27 percent of these roadways have not seen more than basic maintenance in up to 20 years.

Part of Road MaP’s focus on these types of roadways involves alternative treatments such as recycled asphalt paving (RAP) which repurposes roadway millings, either by central plant mix or by cold-in-place; higher RAP mixes of warm mix asphalts; and Flexible Base (FB) paving which mixes new aggregate with a liquid bituminous oil and places it through a paver.

From the 2018 state fiscal year through the end of June 2021, the department has saved $42 million and completed 604.7 miles of secondary road improvements using alternative treatments by department-force and contract work. That’s 247 more miles than what would have been completed using traditional treatments.

These methods allow the paving and reinforcing of surfaces and shoulders of roadways that would have seen shorter-term fixes due to available funding. Roadway conditions and access, along with bridge safety, are vital to farmers’ bottom lines and efficiency.

Pennsylvania’s multimodal transportation system carries approximately $1.6 trillion of goods into, within, out of, and through the state annually. With agriculture as the state’s largest industry, farmers see an impact from poor roadway conditions and detours. Without additional investment, farmers will see increased costs to repair their vehicles as wear and tear from poor roadway conditions worsen.

Additionally, without continued and expanded focus on bridges, more weight restrictions and potentially lengthy detours to and from farms may be necessary. When farmers must deal with longer delivery times, or if their goods are damaged on the way to distribution, their costs go up. Delays could also increase the number of trucks businesses need to meet delivery schedules, diverting money that could be otherwise invested in the business including its employees.

Pennsylvania has roughly 25,400 state-maintained bridges and the department and industry partners have made progress on improving conditions. The number of state-owned bridges in poor condition has decreased from a high of 6,034 in 2008 to fewer than 2,460. However, approximately 250 of the state-maintained bridges move into the “poor-condition” category each year due to their age and deterioration. With an aging system and without increased investment, the rate is anticipated to increase as maintenance and preservation work will be less effective, leading to the need for full replacements or more extensive repairs.

The media briefing built on the recently completed work of the Transportation Revenue Options Commission, on which Gramian served as Chair and Redding was among the more than 40 members. On March 12, Governor Wolf signed an executive order establishing the commission, which was tasked with developing comprehensive funding recommendations for Pennsylvania’s vast transportation network. The TROC included transportation, economic, and community stakeholders from the public and private sectors, including majority and minority leaders from the House and Senate Transportation and Appropriations committees.

The TROC report submitted to the Governor and General Assembly on July 30 presents an overview of transportation funding in Pennsylvania and outlines the commission’s review of several potential revenue sources including road user charges, tolling, redirection of funding, fees, and taxes. Analysis of each option includes potential revenue that a given solution could bring the commonwealth, concerns raised by commission members relating to each option, and suggested next steps.

The TROC’s work was informed by presentations and materials provided during and associated with its nine meetings held since March 25. Those materials – such as a report of PennDOT Efficiencies – can be found with meeting presentations, minutes, and recordings on the TROC page.