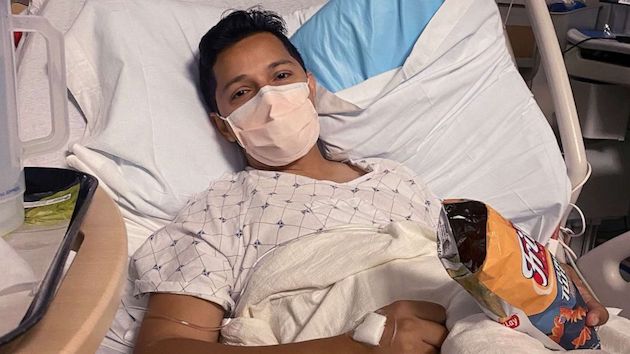 (NEW YORK) — “I’m sorry, I think my veins are camera shy,” I joked to the nurse who was having trouble finding the right place on my hand for an IV.

I was surrounded by cameras and wearing nothing but a gown and some unflattering yellow socks that all patients are required to wear at MedStar Georgetown University Hospital in Washington, D.C. The awkwardness of having several people in the hospital room and the discomfort of the bone marrow donation I was about to undergo was all voluntary and for a good reason: to give a stranger a second chance at life.

Three months prior to the procedure, the Be The Match Registry, a list of millions of prospective blood stem cell and bone marrow donors operated by the Minneapolis-based National Marrow Donor Program, informed me via email that I was a potential blood stem cell match for a patient. I had been on the registry for nearly a decade and this was the third time I was a possible match for a patient, but it would be the first time I actually got to donate.

Early on, I decided to approach this experience not just as a donor but also a reporter. I’m an immigration reporter and producer for ABC News, and learning as much as I could about the donation process kept the focus off my nervousness. I learned that as a Mexican male on the registry, I was part of an astonishing minority. Latinos are severely underrepresented when it comes to bone marrow donors. Of the 9 million U.S. registered donors on the Be The Match Registry, only 13% are Latino compared to 57% who identify as white.

I couldn’t pass up the opportunity to tell a story about how ethnicity could play a crucial role in finding a donor, and I started thinking about who my transplant recipient would be. In order to maintain privacy, donors and recipients are kept anonymous until a year after the procedure when they have the opportunity to meet, if they both agree. To this day, I still don’t know the most basic things about my recipient. I often wonder what their name is and where they’re from. What I do know is that the patient was a young individual battling leukemia and that, as a Mexican male on the registry, I was helping to better the odds for people like them to survive a deadly disease.

Despite being sold on the idea of reporting about this experience, it was actually the death of a good friend that sealed the deal and made me go forward with the process.

I received that email from Be The Match Registry a few days after my friend and colleague, ABC News photojournalist Jim Sicile, passed away from cancer. Reeling from the death of such a lovable and caring person, I wanted to honor his legacy.

“What better way than by helping a stranger?” I asked myself.

Hispanics have a 48% chance of finding a donor on the Be The Match Registry. In other words, less than half of Hispanic patients are likely to find one. That probability is even lower for Asian or Pacific Islanders and Black or African American patients.

At the start of the vetting process, I was sent a buccal swab kit to collect cells from inside my cheek. Scientists analyze the human leukocyte antigens (HLA), which are proteins — or markers — found on the surface of most cells in the body and make up a person’s tissue type. HLA are an important part of the immune system, which uses these markers to recognize the cells that belong in the body and those that do not.

HLA tests is used to match tissues and DNA between the donor and the person receiving a bone marrow or cord blood transplant. Since these markers are inherited, patients have a higher likelihood of finding a donor that shares the same ethnic background. In some cases, donors from different backgrounds can also match.

“Your ancestors for generations and generations have gone through a lot, depending on which area of the world your ancestors are coming from,” Dr. Abeer Madbouly, principal bioinformatics scientist at the Be The Match Registry, told ABC News. “People who survive these conditions have a common agent.”

Stem cells, which are largely found in blood and bone marrow, that soft, spongy tissue in the center of certain bones, produce cells that help the body carry oxygen to organs and tissue, fight infections and stop bleeding. The majority of stem cell donations happen non-surgically through a process that collects the cells from the blood. In other cases, a patient must undergo a medical procedure under general anesthesia that harvests marrow from the hip bones.

I’m admittedly squeamish when it comes to needles — you couldn’t pay me to look at my arm when I’m getting a flu shot. So when I learned that my patient required a bone marrow donation, I became very nervous.

The Be The Match Registry provides a team of caseworkers to ensure that the donor’s needs are met. All expenses incurred as a result of the donation process are covered, including missed days of work. Each donor is also assigned a counselor, and mine helped calm my nerves as the date of the procedure drew near.

On the day of the donation, Dr. Wolfgang Rennert drew a picture of my pelvic bones and explained to me that a small incision would be made on each of my hips so that a thin needle could harvest the marrow.

The last thing I recall before the anesthesia worked its magic is looking around the hospital room. I thanked the doctors for their life-saving work and said a silent prayer for my recipient. It went something along the lines of: “I hope this helps you and you have a long life.”

I woke up about an hour and half later feeling some soreness in my hips. I was tired from the anesthesia but still managed to take a selfie video before falling asleep.

“I just woke up from the procedure,” I said in the video. “I’m very, very groggy but overall feeling pretty good. I’m happy, proud and hopeful for the recipient.”

I spent the night in the hospital. The next day, I interviewed Rennert about why minorities are underrepresented in bone marrow donations.

“The background of it is the sad truth that our health care system is unevenly distributed in its access to health services,” he said, “so that minority populations have less access not only as recipients but also as donors.”

“I have a motorcycle,” Alfredo Diaz said as he tried to tickle me and climb on my shoulders. Before I could inquire further, he darted into his backyard and came riding back on a battery-powered “motorcycle.”

I had known the playful 9-year-old for less than an hour and we already had a secret handshake. Most importantly, we had a common goal for our meeting: to do an interview for ABC News at his home in Chicago and to help find him a bone marrow donor. It had been almost a month since I had donated to a different patient.

Alfredo suffers from a very rare genetic disorder called IL-10 receptor deficiency, and he is one of just 100 known cases in the United States. The illness causes severe inflammation in his gut and affects his organs, which means Alfredo’s body is unable to absorb nutrients the way healthy ones do. He has spent his life in and out of hospitals. He has an ostomy bag and eats through a feeding tube. Without a bone marrow donor, he is not expected to survive.

“We’ve been struggling since the first week he was born, and I don’t want to lose my son,” Alfredo’s mother, Natalia Torres, told ABC News. “I’ve been asking God to please help us find this matching donor for him.”

Natalia and her husband Reuben have been trying to raise awareness in the Hispanic community about the benefits of donating bone marrow. Of the 9 million U.S. registered donors on the Be The Match Registry, only 13% are Latino compared to 57% who identify as white. By building a wider network of willing donors, patients like Alfredo have a better chance at overcoming their illness.

My hope for my patient and Alfredo

Donating bone marrow has been the most fulfilling experience of my life. It’s also the most immersive story I’ve ever told.

I may not ever meet the recipient, but my wish for them is the same for Alfredo.

I hope one day you overcome your illness and get to witness the beauty this life has to offer. May you one day find fulfillment in an act of kindness or a silly handshake. Most importantly, may you be able to dream big and unafraid.

Visitor attacked by buck in Yosemite National Park, as others feed wildlife
COVID-19 live updates: WHO classifies Omicron as ‘a variant of concern’
Classic car shows evolve alongside a new generation of car enthusiasts
Homicide record broken in Louisville with 2 slayings, including a teenager killed on Thanksgiving Day
Death of 14-year-old Florida boy ruled a homicide
Zoë Kravitz says Robert Pattinson is “perfect” as the Dark Knight in the upcoming ‘The Batman’