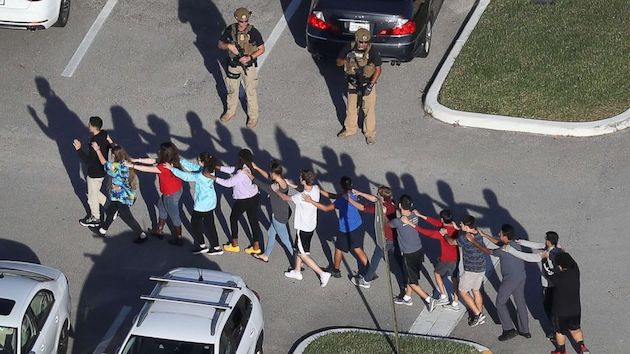 (NEW YORK) — This report is a part of “Rethinking Gun Violence,” an ABC News series examining the level of gun violence in the U.S. — and what can be done about it.

Alex Schachter, a 14-year-old marching band member gunned down in the Parkland, Florida, mass shooting, would have graduated from Marjory Stoneman Douglas High School this year.

“All of Alex’s friends were able to walk across that stage,” his father, Max Schachter, told ABC News. “Since Alex wasn’t there, I did it and collected his posthumous diploma. It’s sad watching all of these kids go off and go to college and do everything that I hoped that Alex would do.”

Alexander, my sweetest little boy. I still can not believe this has happened. How? Why? I miss you every day.

One week from worst Valentine’s Day ever. pic.twitter.com/Se1o9tCPhk

The accused Parkland gunman was armed with an AR-15-style rifle when he stormed into Stoneman Douglas in February 2018, killing Alex and 16 others.

The United States has over 20 million AR-15-style rifles legally in circulation, according to the National Shooting Sports Foundation, a national trade association for the firearm industry. That accounts for a small percentage of the roughly 400 million guns in the country — but the popularity of AR-15-style rifles has been growing “exponentially” ever since the federal assault weapons ban expired in 2004, said Mark Oliva, the NSSF’s public affairs director.

Because AR-15-style rifles are so versatile, with the ability to add scopes and change both the length and size of the barrel, they became a desirable weapon for many Americans, especially people who like to hunt, ABC News contributor and former FBI agent Brad Garrett said.

But along with that rise in popularity, the use of these weapons in mass shootings is also climbing, according to Louis Klarevas, a research professor at Teachers College, Columbia University who specializes in gun violence and safety. From Sandy Hook to San Bernardino to Orlando to Las Vegas, “most of the deadly high-profile mass shootings in the past decade were perpetrated with assault weapons, particularly AR-15-style assault rifles,” Klarevas said.

Sometimes referred to as “assault weapons” or “military-style rifles,” this class of firearm can encompass many different kinds of guns — not just the more well-known rifles, such as the AK and AR-15 series weapons. The term “assault weapon” generally encompasses a wide range of models, including the UZI rifle and pistol, the Beretta AR-70, the SKS rifle and more, according to the California Attorney General’s Assault Weapons Identification Guide.

AR-15 style rifles are rifles “modeled on the AR-15 platform and that fire the same caliber cartridges,” Klarevas said, such as the Smith & Wesson M&P15 and the Ruger AR-556.

Along with their use in hunting, for some Americans, AR-15-type weapons also connote patriotism, which can be traced back to the M16 military rifle that became prominent during the Vietnam War, according to Garrett.

“It didn’t hurt that Sylvester Stallone uses an assault-type weapon in ‘Rambo,"” the 1982 film about a Vietnam veteran, Garrett said.

But in 1989, an AK-47 was used to kill five children at a Stockton, California, elementary school, leading California to become the first state to enact an assault weapons ban, Klarevas said. That was followed by two other high-profile mass shootings with semiautomatic pistols — one in San Francisco and one on a Long Island Rail Road commuter train — in 1993.

Those shootings were the impetus for the Federal Assault Weapons Ban, signed into effect by President Bill Clinton in 1994, stopping the manufacture, sale, transfer and possession of these types of firearms.

The federal ban was not renewed by Congress and expired in 2004. Gun massacre incidents involving these weapons then skyrocketed from 2004 to 2014, jumping 167% compared to the 10 years the federal law was in effect, Klarevas’ report said, and active shooter incidents with different guns overall have been steadily climbing over the last two decades, according to FBI data, which does not break down murders by exact model of gun used.

While there’s no federal assault weapons ban now, Washington, D.C., and seven states — California, New Jersey, Hawaii, Connecticut, Maryland, Massachusetts and New York — have banned the possession of certain kinds of these firearms, and the rules vary state to state. According to Klarevas’ report, “In the past 30 years, accounting for population, states with assault weapons bans in place experienced 54% fewer gun massacres involving the use of assault weapons and 67% fewer deaths resulting from such attacks perpetrated with assault weapons.”

The pros and cons

In many rural and suburban areas, fully and semi-automatic rifles hold a practical value, such as for defending property, and a familial value, to pass down weapons to future generations, Garrett said.

AR-15-type rifles are also beloved as sporting rifles because they are accurate, versatile, light and easy to disassemble, Garrett said. They’re also simple to shoot — Garrett said anyone could be trained in a few hours.

“The way it’s designed, it is easily adaptable. It can fit my frame,” Oliva said, and with adjustments, “It can also fit my wife, and she can shoot that rifle just as easily.”

Oliva stressed that AR-15-style rifles are semi-automatic — and the automatic rifle he used in Iraq and Afghanistan “is not the same rifle that I have in my gun safe today.”

The rifle he carried in war was automatic and could fire three rounds without any other action, Oliva said, while the gun in his safe is semi-automatic and requires pulling the trigger every time you want to fire.

But according to Garrett, automatic and semi-automatic rifles can easily fall into the hands of those who want to commit murder.

Sometimes after a high-profile mass shooting, states will tighten up gun laws, such as by requiring background checks, reducing the sale of certain weapons or banning the sale of high-capacity magazines. But those looking to buy these items can often find another way, Garrett said.

In most states you must be 21 years old to buy a handgun from a federally licensed firearms dealer, but only need to be 18 to buy a rifle, he pointed out. That’s because, historically, rifles have been used by people in rural areas to hunt or defend property, Garrett said. But with the prevalence of private and black market sales, “none of these laws apply in reality,” he said.

Some guns are modified by bump stocks, which are used to make the weapons fire like machine guns. The perpetrator of the 2017 Las Vegas massacre, the deadliest mass shooting in modern American history, used a bump stock, leading them to be banned federally in 2019.

Since 9/11, the 10 deadliest acts of intentional violence in the U.S. have all been gun massacres, according to Klarevas. Of those 10 acts, the seven most recent — including Parkland — involved what he defined as an assault weapon. The other three shootings, carried out with handguns, were the oldest, one taking place in 2007 and two others happening in 2009.

In the 1980s, less than 20% of gun massacres involved assault weapons, while in the 2010s, that number went up to 35%, Klarevas said. In the last three years, those weapons made up 67% of gun massacres, according to his report.

The push and pull over bans

When Alex was killed in Parkland, “it left a huge hole in my family that could never be replaced,” his aunt, Gail Schwartz, told ABC News. Alex would have turned 18 in July.

Schwartz, along with other family members and survivors of the Parkland and Orlando mass shootings, launched Ban Assault Weapons NOW (BAWN), a grassroots initiative aiming to ban assault weapons in Florida through legislative and electoral efforts.

BAWN first looked to bring a constitutional amendment banning assault weapons before Florida voters, and collected signatures and donations across the state, she said.

“But when we took the amendment to the Florida Supreme Court — because we need to get their approval before appearing on the ballot — the … justices rejected the amendment,” Schwartz said.

Florida’s Supreme Court rejected the proposed constitutional amendment in June 2020 on grounds that the wording was misleading, The Miami Herald reported. The ballot measure summary, which was limited to 75 words, said assault weapons lawfully possessed before the new rule would be exempt; the ballot measure’s full text said the weapons could not be transferred, the Herald reported. The majority of the justices, however, said “the summary exempts the weapon itself. So, under that theory, the weapon, if it’s registered, could be transferred to someone else,” and since the justices’ “interpretation of the summary conflicts with the full text of the amendment,” they deemed that “the measure itself is misleading,” the Herald reported.

When BAWN lobbied the Florida legislature in 2020, 52 co-sponsors signed on, accounting for 90% of the state’s Democratic legislators, she said. But no Republicans — who hold the majority in Florida’s legislature — would co-sponsor the bills, Schwartz said.

Those numbers mostly match up with how members of political parties feel about a potential ban. When split by party, 27% of Republicans support an assault weapons ban and 70% oppose, while 88% of Democrats support the idea and 11% oppose it, according to an April poll from Quinnipiac University, a nationally recognized public opinion polling center.

Overall, 52% of Americans support and 43% oppose a nationwide ban on the sale of assault weapons, according to the poll.

Oliva is among those against a ban.

“It’s truly heartbreaking to hear the stories” of mass shootings, Oliva said, but he added that AR-15s tend to take the blame “for the evil that the individual has committed instead of holding those individuals responsible.”

‘The Bachelorette’ recap: Hometowns week ends with a devastating elimination
Ghislaine Maxwell accuser ‘Jane’ testifies on Day 2 of trial
Dr. Oz running for U.S. Senate seat in Pennsylvania
Three killed, eight hurt in shooting at Michigan high school
How’d you like to stay in the Grinch’s cave for the holidays?
Michael J. Fox on retiring from acting, embracing optimism, and re-discovering what people love about ‘Back to the Future’