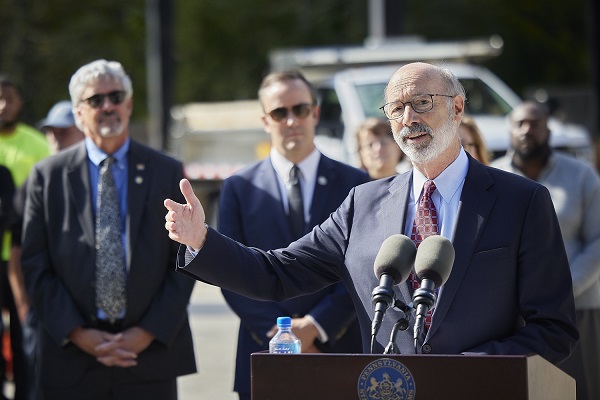 He says it’s part of bouncing back from labor shortages and ensuring that workers are paid a fair wage at good quality jobs.

The governor is also calling for paid sick leave for all workers in Pennsylvania, encouraging the legislature to pass Senate Bill 13.

“With our economy on the comeback, there are so many job openings that people can select the option that is best for their family. This has created a tremendous moment for workers,” said Gov. Wolf. “With Pennsylvanians’ renowned work ethic, this is an opportunity to improve jobs and workplaces. My workforce plan will create safer workplaces, guarantee paid leave, and promote higher wages for workers.”

With a record 4.3 million people in the U.S. voluntarily leaving their jobs in August, many choosing better options, workers across the country are making clear that they want to transform work and the workplace.

Joining the governor for a news conference in Nether Providence Township to discuss the plan were Labor & Industry (L&I) Secretary Jennifer Berrier, Sen. John Kane, Rep. Leanne Krueger and other legislators and workers.

“It is way past time for the Pennsylvania Legislature to take action on bills that will support working families,” said Rep. Krueger. “My colleagues and I are ready to vote today to advance commonsense bills to protect workers and support the critical infrastructure that working families rely on – things like childcare support, paid family leave, public-sector OSHA and so much more.”

Through executive action, the governor is directing L&I and the Office of Administration to study the feasibility of implementing Occupational Safety and Health Administration (OSHA) standards in offices under the governor’s jurisdiction. State agencies will also ensure those receiving state grants and contracts follow labor laws and understand the consequences of not complying.

The governor is also calling on the legislature to pass S.B. 310, sponsored by Sen. Tina Tartaglione, and H.B. 1976, sponsored by Rep. Pat Harkins. These bills extend OSHA safety rules to all public employees ​– safeguards the nation’s private sector and federal employees have benefitted from for 50 years.

The governor is directing DCED to verify a business receiving an offer of assistance provides its workers paid sick leave and pays no less than the minimum wage for state employees before making a financial incentive offer. The $13.50 minimum wage for state employees and contractors will reach $15 on July 1, 2024, under an executive order the governor signed in 2018.

The governor is also urging the legislature to pass S.B. 13, sponsored by Sen. Vince Hughes, and H.B. 1035, sponsored by Rep. Mike Zabel, that would provide paid sick leave to workers in Pennsylvania. An estimated 400,000 Pennsylvania workers lack paid sick leave, which forces them to work when sick, risking their health and those around them. Providing paid sick leave would improve public health and prevent more people from getting sick, a protection that is beneficial to both workers and their employers.

In addition to the executive order on minimum pay for businesses receiving DCED offers, the governor called on the General Assembly to pass S.B. 12, sponsored by Sen. Tina Tartaglione, or H.B. 345, sponsored by the Rep. Patty Kim, to raise Pennsylvania’s minimum wage to $12 an hour with a path to $15 and removes local preemption.

The governor has proposed a commonsense minimum wage increase for seven years, but the legislature has failed to act, leaving Pennsylvania behind all of our neighboring states with a wage floor of only $7.25. The minimum wage has lost nearly 17 percent of its purchasing power since the last increase and the value has declined nearly 31 percent compared to 50 years ago.

Eight states are on a path to $15, including red states, and President ​Joe Biden is raising the federal minimum wage for contractors to $15. Overall, 29 other states, including every state that borders Pennsylvania, have a higher minimum wage.

The governor also directed L&I to pursue regulatory changes so people are fairly paid for their work time spent on activities such as security screenings and putting on equipment required for their job. L&I is also pursuing regulations so workers whose wages depend on tips receive the full amount of their tips and that there is better clarity around tipping processes and definitions.

While the governor is using his executive authority to help workers, many bills to protect and invest in workers are languishing in the General Assembly. Republican legislative leaders should immediately take action to pass equal pay for women, family and medical leave, help for seasonal farm workers, fair hiring practices and to stop misclassification of workers.