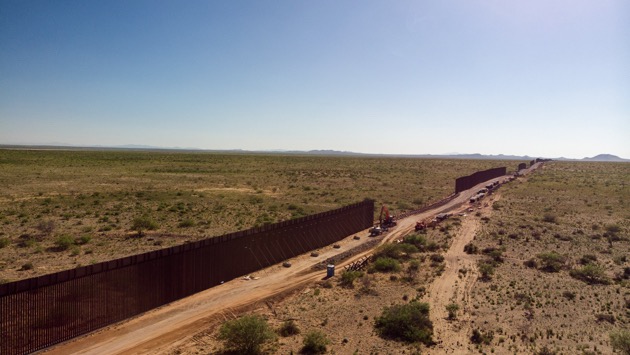 But Ortiz, the president of Aguilas del Desierto, or Desert Eagles, a volunteer-run organization that conducts search and rescue missions for migrants who are believed to be missing or dead, still remembers a call one night in 2019 from a pregnant woman who said her husband was lost somewhere near the Arizona border.

The woman said her husband called to tell her he crossed into the United States, but became disoriented when he tried to reunite with the smugglers who had advised him to go around a port of entry and cross the border in a remote region where there was no wall. Ortiz dispatched a team of rescuers and says 14 relatives of the missing man joined his team, including his father and brother.

After a few hours of searching, Ortiz said they found his body already rapidly decaying under the desert sun. His brother identified the remains.

“That was one of the saddest things I’ve ever witnessed in my life,” Ortiz said.

This year alone, official numbers from U.S. Customs and Border Protection show the agency rescued over 11,800 migrants and reported over 470 deaths near the border. The number of rescues has more than doubled since last year and the number of deaths is the highest since 2005.

CBP only counts rescues and deaths when the agency is involved in the response, so a more accurate picture of how many are missing and perished can be pieced together by analyzing data from medical examiner’s offices and the few organizations helping to identify remains of suspected migrants.

Humane Borders and the Pima County Medical Examiner’s Office created a Migrant Mortality Map tracking migrant deaths in Arizona. So far this year, 189 remains have been recovered and experts expect the number to grow as winter approaches and desert temperatures plummet. The death rate could potentially surpass the 223 cases reported in 2020.

While there are many factors that drive people to attempt border crossings, immigrant advocates say policies held over from the Trump administration are a central cause. They argue Title 42 and “Remain in Mexico” make seeking asylum more difficult and the protocols are pushing migrants to take greater and more frequent risks to get into the country.

Title 42, a clause of the 1944 Public Health Services Law, allows the government to prevent the entry of migrants during a public health emergency without giving them an opportunity to claim asylum, a right afforded by U.S. law. Former President Donald Trump enacted the policy in response to the COVID-19 pandemic. Migrant Protection Protocols, also known as “Remain in Mexico,” is a controversial policy enacted by Trump in late 2018 that forces asylum seekers to wait in Mexico while their claims are processed.

Bradford Jones, a spokesperson for Humane Borders and a political science professor at University of California, Davis, said human remains are increasingly found in the western desert away from cities and potable water. He credited the westerly trend in part to Title 42.

“My strong sense is that Title 42 expulsions are also contributing to either migrant deaths, or certainly migrants getting into distress; that’s not just in Arizona, but also in Texas,” Jones said.

The Biden administration defended its use of the policy in response to an ongoing lawsuit filed by the American Civil Liberties Union seeking to stop the administration from using it to expel families. More than 1.1 million migrants have been expelled under Title 42 since the policy went into effect in March 2020, according to data released by CBP.

“This has been the worst policy that was implemented by Trump that — much to our surprise and disappointment — has been continually used by the Biden administration,” said Vicki Gaubeca, director of the Southern Border Communities Coalition.

Gaubeca said migrants with legitimate claims of asylum are bypassing ports of entries out of fear they’ll be expelled under Title 42. As they move away from the heavily surveilled areas of the border and into more remote terrain, the chances of reaching civilization and getting help if they are injured or lost diminish.

Dulce García, executive director of Border Angels, draws a strong correlation between the implementation of Title 42 and the places in the desert where her organization renders aid. They place thousands of gallons of water along paths heavily traveled by migrants and since Title 42 went into effect, they’ve placed the containers in more remote areas.

“We drop the water and we see that in some routes there’s 100% consumption and that’s an indicator that people are still crossing. We see kids’ backpacks, kids’ shoes, women’s underwear. … It’s family units that are going through there,” said García.

During a discussion as part of the Sougan Center’s 2021 Global Security Forum on Tuesday, Secretary of Homeland Security Alejandro Mayorkas stressed that Title 42 is a public health authority not an immigration policy.

“It is not an immigration policy that we in this administration would embrace. But we view it as a public health imperative as the Centers for Disease Control has so ordered,” said Mayorkas.

Border Angels runs 17 temporary migrant shelters in Mexico along the border that are filled with thousands of people who have attempted to cross the border several times and are waiting to see if Title 42 and the MPP are terminated.

The Supreme Court blocked President Joe Biden’s effort to end MPP in August, but the administration recently announced it would attempt to terminate the policy again.

In a late-night filing Thursday, the Department of Homeland Security filed two documents – one which objected to the court’s decision to reinstate MPP, which the Biden administration had ended, and the other that said it was complying with the order and was engaged in high-level talks with the Mexican government to restart the protocols in mid-November.

People expelled under Title 42 are either repatriated to their home countries or moved back across the border often before they can fully prepare an asylum claim. The percentage of individuals apprehended more than once by Border Patrol agents grew from 7% in 2019 to 26% in 2020, according to CBP data.

“It certainly creates the incentive to cross multiple times and not immediately seek out Border Patrol because you may be expelled,” said Shaw Drake, an attorney for ACLU Texas.