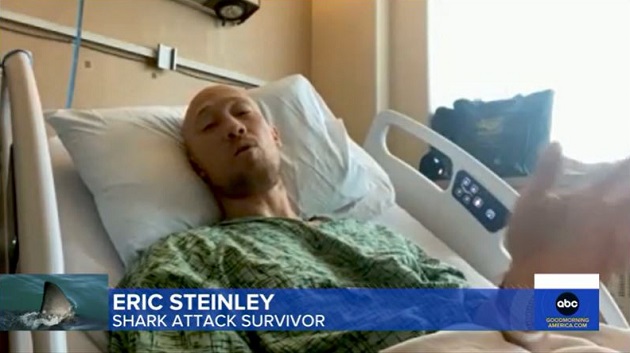 (BODEGA BAY, Calif.) — Surfer Eric Steinley is recovering in the hospital after he was bitten by a great white shark in Bodega Bay, California.

The 38-year-old told ABC News he was on his surfboard Sunday at Salmon Creek Beach waiting to catch a wave when the harrowing incident occurred.

“I was in a lot of pain and still thinking, you know, I’m either going to lose my leg or I’m gonna die,” Steinley said. “I just felt this heavy thing pull on me and it was like a clamp right around my leg. And we went underwater together in slow motion.”

Another surfer who was nearby in the water, Jared Davis, said he saw “the tail fin of a shark. They were kind of going down into the water.”

As Steinley was under the surface and bleeding, he fought back.

“I punched this thing. And I mean, you can see just from grazing its teeth. I cut my hand. But it was such a measly punch compared to how big this creature was,” he explained.

The shark loosened its bite, according to Steinley, who then came up for air and warned other surfers.

Nearly a five minute paddle from shore, Steinley said he questioned his own fate.

“I started to see spots and then I know, you know, [thought] I’m definitely I’m not going to make it,” he said. “And I catch up to Jared and he paddles next to me.”

When Davis saw Steinley’s leg, he said it looked like there was a red stripe on his wetsuit.

“He goes, ‘You going to make it, don’t look at your leg, let’s just keep going.’ And then we paddled in together until a wave came, and then I gave it my all,” Steinley said of the moment he fought to get to safety.

Nearly a dozen surfers rushed in to help once they got to shore, using surfboard leashes as a makeshift tourniquet to help stop the bleeding.

“All of the surfers that were with me out in the water came out altogether and grabbed this big, long board and put me on that long board,” Steinley said. The group “held me on the board, kept up the board and carried me all the way up the steps, saving time for when the ambulance got there.”

Timothy Saluzzom, a paramedic who responded on the scene, said the care Steinley got prior to his arrival “really helped to save his leg.”

The California Department of Fish and Wildlife confirmed that this was a great white shark, at least 10-feet long, based on the DNA and bite radius from Steinley’s surfboard.

Dave Bader, chief operations and education officer at the Marine Mammal Care Center, said bites from great white sharks can be severe. Steinley “was lucky enough to be in and around a space where there were other people that were there to help him.”

He added, “Eric did all the right things by being in a space where he could get that immediate help.”

Steinley is out of the ICU after two surgeries with a long recovery ahead. While surfing may not be the same, he said he wants to get back up on the board at least one more time.

“I still want to be part of the lifestyle,” Steinley explained. “I’m just so thankful … and still in disbelief that I’m alive because of it.”