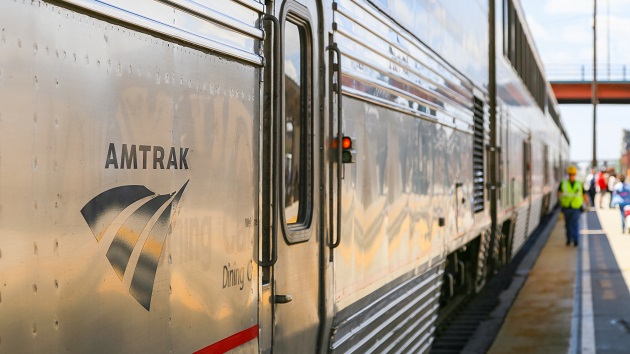 (JOPLIN, Mont.) — A survivor of last month’s Amtrak train derailment in Montana said he “hung on for dear life” to a restroom handicap bar as the car he was in toppled on its side and skidded along a gravel embankment.

Justin Ruddell said during a news conference on Thursday that he suffered two broken vertebrae and five broken ribs in the Sept. 25 crash, and witnessed “death and destruction around me that I’ll never be able to forget.”

“I thought I was going to die,” said Ruddell, a mechanic from Klamath Falls, Oregon, adding that he also suffered injuries to his jaw and head.

The crash of the Amtrak Empire Builder train near Joplin, Montana, killed three people and injured more than 50. The National Transportation Safety Board and the Federal Railroad Administration are still investigating the incident.

Ruddell and three other injured passengers filed federal lawsuits in U.S. district court on Thursday against Amtrak and the BNSF Railway Company, which owns and operates the track on which the derailment occurred. The passengers accused Amtrak and BNSF of negligence, saying the crash was preventable.

“This derailment should not be happening in this country in 2021. It’s inexcusable,” said attorney Henry Simmons of the Clifford Law Offices in Chicago, which is representing the injured passengers. “It should be a never-event and we are going to hold Amtrak and BNSF responsible, and we’re doing it for our clients and for the future of all traveling passengers in the United States.”

It’s the third time in five years lawsuits have been filed against Amtrak for a fatal derailment.

Amtrak and BNSF declined to comment when reached by ABC News, other than the following statement from Amtrak: “We are deeply saddened by the loss of life and injuries due to the derailment of the Empire Builder train on Sept. 25, near Joplin, Mont., on BNSF railroad. It is inappropriate for us to comment further on pending litigation.”

Ruddell said he was returning home after fulfilling a promise to a friend who died: to take a trip together to the East Coast. He was traveling with that friend’s ashes in a glass container.

“It was my first experience on an Amtrak train, and I was looking forward to a comfortable, relaxing ride across the country,” Ruddell said.

Moments before the crash, he said he left the train’s observation car and went into an adjoining car to use the restroom, soon after which the train “suddenly jolted and veered on its side.”

He said it was a “miracle” he survived.

“I could look outside the train and see all the gravel and dirt and everything that was outside along the tracks getting scooped up into the car as it was skidding down the side of the tracks,” he said. “If I were to let go, I would have fallen down and out that door, and got crushed by the train or ground up in the dirt.”

After fellow passengers helped him crawl from the wreckage, he went back to rescue his friend’s ashes.

“I was supposed to start a job after I got back, which I’m not able to. The pain is unreal,” Ruddell said. “I’m not able to sleep at night. I have a hard time eating because of the injury to my jaw. I never thought this was going to happen.”

The lawsuits also seek to challenge an Amtrak policy instituted in January 2019 requiring that legal action against the company be resolved through a mandatory arbitration process. Under the change, customers, upon purchasing a ticket, waive their right to sue Amtrak for any reason.

Simmons, the lawyer, called the Amtrak arbitration clause printed in fine print on the back of tickets “reprehensible” for a rail line funded and owned by taxpayers.

“When you get on a train like Amtrak are you really thinking about a train derailing and you holding on to a handicap bar while the train doors open and you’re looking at death’s door?” Simmons said. “People don’t look at the back of the ticket.”