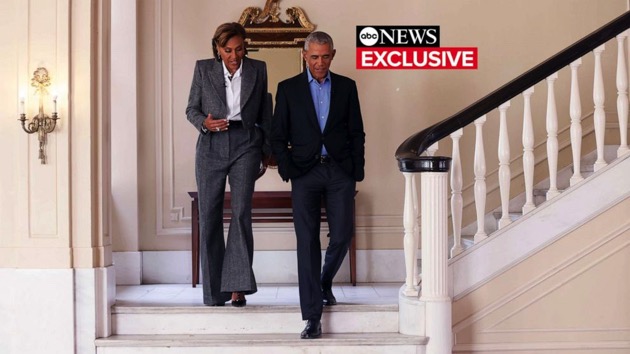 (CHICAGO) — Ahead of Tuesday’s groundbreaking on the Obama Presidential Center in Chicago, former President Barack Obama reflected on the center’s mission and defended his decision to choose the historic Jackson Park neighborhood on Chicago’s South Side as the site to honor his legacy.

Some community organizers have expressed concern that development of the center, which would become a tourist attraction, could lead to gentrification of the neighborhood, while park preservationists have challenged the construction in court, citing environmental concerns.

“The truth is, any time you do a big project, unless you’re in the middle of a field somewhere, you know, and it’s on private property, there’s always going to be some people who say, ‘Well, but we don’t want change. We’re worried about it. We don’t know how it’s going to turn out,"” Obama told Good Morning America anchor Robin Roberts in an exclusive interview. “Which is why we’ve gone through such an exhaustive process to encourage and elicit comments and concerns and criticism and suggestions from the community.”

Jackson Park is a public park on the National Register of Historic Places that was designed by New York Central Park designer Frederick Law Olmsted.

A four-year federal review, which concluded in February, determined that the new Obama Center would pose “no significant impact to the human environment.”

But Protect Our Parks, a nonprofit park preservationist organization that filed an unsuccessful lawsuit to block construction in 2018, filed another lawsuit in April challenging the federal review.

The group argued that construction “will tear up this Frederick Law Olmsted masterpiece,” resulting in the removal of trees, the removal of the Women’s Garden and the closure of roadways.

On Aug. 21 the U.S. Supreme Court rejected an emergency appeal by the group to block construction.

Amid ongoing litigation, Protect Our Parks on Sept. 20 filed a brief with the U.S. Court of Appeal for the Seventh Circuit in support of its preliminary injunction request, the group told ABC News.

Monday, on the eve of the groundbreaking, a spokesperson for the group released a statement saying that “the homecoming of the former President and the First Lady should be a moment of pride for Chicagoans. On this visit, though, we hope they will mourn the devastation of the initial clear-cutting of the mature trees and the destruction of the Women’s Garden in Jackson Park, in addition to the long-term environmental and public health dangers that will ensue.”

“Unfortunately, hosting a series of virtual groundbreakings will not change the facts of the case or the long-term adverse effects on the community,” the statement said. “On the contrary, it would take one decision by Mr. and Mrs. Obama to relocate the OPC site to the adjacent area close to Washington Park.”

Asked about the legal hurdles, Obama said that he’s “absolutely confident” that the center will benefit the local community.

“The overwhelming majority of the community has been not just OK with it, but are hugely enthusiastic about it,” he told Roberts.

Presidential libraries are often housed in affluent areas, but much of Chicago’s South Side, which is home to a predominantly Black community, is in an underserved and economically depressed area of the city.

The Obama Presidential Center, which will honor the legacy of the first Black president, will include a library, museum, gardens, and a children’s playground. Organizers say it will seek to bring investments and jobs to the community.

“The Obama Presidential Center will connect the economy of the South Side of Chicago with the rest of the city, creating new jobs and opportunities. It will breathe new life into a park that has long been protected and loved, but underused. And it will uphold our commitment to this vibrant community,” according to the Obama Foundation, which is funding the project.

Obama was born in Hawaii but spent much of his formative years on Chicago’s South Side. It was there that he worked as a community organizer and was first elected to public office. The former president decided in 2016 that the South Side, where is also where former first lady Michelle Obama grew up, would house his presidential library.

“The young person who’s growing up across the street or down the block or a few miles away, now suddenly have a place where concerts and speeches and debates and forums are taking place that they can access,” Obama said.

“If they want to bring about change in their neighborhoods, they’ve got resources and people who can teach them how to do that effectively. And they’re going to be able to see themselves as part of that change in a way that, so often, they don’t feel right now.”

With so many unknowns about omicron, when will we have answers?
Member of ‘Jena Six’ speaks out on race and the justice system 15 years later
Parents of Michigan school shooting suspect plead not guilty, held on $500K bond each
Kevin McCarthy defends Rep. Lauren Boebert after anti-Muslim remark, downplays House infighting
Blizzard warning issued for Hawaii with at least 12 inches of snow forecast
Michigan school shooting suspect’s parents charged, missing ahead of court appearance