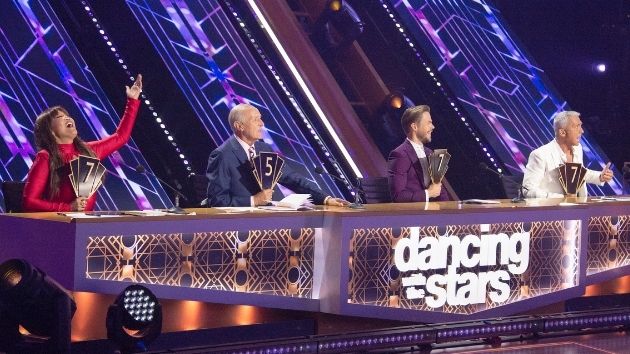 With the first elimination of the Dancing with the Stars season looming heavy over the ballroom, the pressure was palpable on the dance floor.  However, the journey came to a screeching halt for Cobra Kai star Martin Kove, who failed to impress the judges during his ballroom debut.

Kove reacted to his elimination by telling host Tyra Banks he was “beyond belief” that he was going home.

While the ballroom has lost a little of its fighting spirit with the actor’s dismissal, two front runners for the Mirrorball Trophy emerged Monday night when The Talk co-host Amanda Kloots and Nickelodeon star JoJo Siwa ended the night tied on top of the leaderboard.

For Kloots, she honored her late husband Nick Cordero by dancing an emotional foxtrot to their wedding song, “It Had to Be You,” of which he sang to land a role in Bullets Over Broadway — the musical where they first met.

“This song holds such a special place in my heart, and our wedding will always remain in my mind as one of the happiest times of my life,” Kloots told the camera and bravely smiled through her graceful routine that landed her the highest score of the season, a 32 out of 40.

Siwa also brought the judges to their feet with her vivacious cha-cha to Lady Gaga and Ariana Grande‘s “Rain on Me” and proved that she and pro dance partner Jenna Johnson are a force to be reckoned with.

Another notable dance came from Melanie “Sporty Spice” C, who enjoyed a surprise shout out from Ringo Starr following her upbeat foxtrot to “Here Comes the Sun.”

Ringo wasn’t the only celebrity who crashed the night.   Earlier in the show, NBA legend LeBron James also taped a special shout out for Imam Shumpert, which aired after his rumba.

The most memorable moment of the night, however, happened mere hours before the competition kicked off, with Peloton instructor Cody Rigsby and partner Cheryl Burke having to take a step away from the competition to quarantine after the latter tested positive for COVID-19 despite being vaccinated.

Because the two were in isolation, the judges were tasked to judge one of their rehearsal videos of their salsa.  All four agreed that, while the routine lacked the polish, it was enough to secure Cody and Cheryl another week in the competition.

Both assured the audience that they are feeling okay and are looking forward to competing next week.

Dancing with the Stars will celebrate all things Britney Spears when it returns next Monday at 8 p.m. ET on ABC.