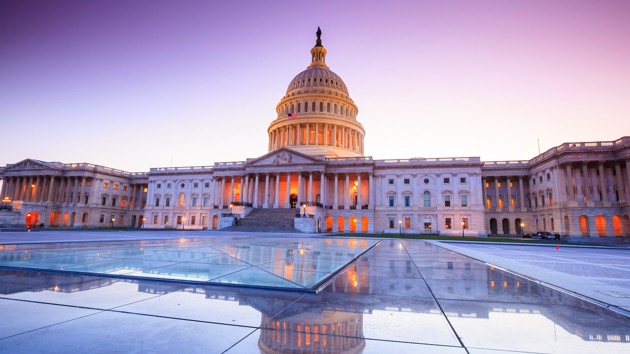 (WASHINGTON) — Senate Republicans are holding firm against a hike to the federal debt limit, even as Democratic leaders announced Monday that they would link the raise in the borrowing limit to a must-pass government funding measure.

Government funding is set to expire at the end of September and administration officials are projecting that the United States could default on its credit in the coming weeks. The White House has warned an unprecedented default could send shockwaves through the economy and trigger a recession.

Minority Leader Mitch McConnell for weeks has dug in against support of a hike to the debt limit, arguing that Democrats, who control both chambers of Congress, should be held responsible for the move. But Senate Democrats worked with Republicans under the Trump administration to raise the debt limit on multiple occasions, and they said it’s a bipartisan responsibility.

House Speaker Nancy Pelosi and Senate Majority Leader Chuck Schumer Monday looked to ratchet up the pressure on Republicans by linking the increase in the federal spending limit to a resolution aimed at keeping the government open past a fast-approaching end of the fiscal year. That resolution includes aid for Afghan refugees and emergency funding for natural disaster relief.

“The American people expect our Republican colleagues to live up to their responsibilities and make good on the debts they proudly helped incur,” the leaders wrote in a statement, pointing to $908 billion COVID relief legislation passed under former President Donald Trump.

Within moments of the Democratic announcement that the two measures would be tied, McConnell threw cold water on the plan. In floor remarks Monday afternoon, he doubled down on his long-held opposition to raising the debt limit.

Republicans would support an extension to government funding, McConnell said, but not if it includes a lift to the debt ceiling.

“Since Democrats decided to go it alone they will not get Senate Republican’s help with raising the debt limit,” McConnell said Monday.

Almost all Senate Republicans are in line behind McConnell, vowing to vote against a raise to the limit because they oppose additional massive spending measures that Democrats are currently working to craft.

Their biggest opposition is to a $3.5 trillion spending measure that encompasses many of President Joe Biden’s agenda items and which is exempt from the normal 60-vote threshold in the Senate. Democrats can pass it without any GOP support, and a raise in the limit should be tied to that bill, Republicans argue.

Sen. Mitt Romney, R-Utah, said Monday his vote on raising the debt limit would be “absolutely no.”

“I will not be consenting to anything that makes it easier for Chuck Schumer and the Democrats to bankrupt our kids,” Sen. Ted Cruz, R-Texas, said, joining a chorus of other Republicans who also said Monday they won’t support a government funding stop-gap that includes a raise to the debt limit.

Democratic Whip Dick Durbin accused Republicans of being politically motivated in their opposition and said they are failing to take responsibility for their actions.

“I certainly hope Sen. McConnell is not going to do damage to America and its economy out of an act of political spite,” Durbin said. “If he won’t stand up and take responsibility for things which he and his members supported in the Trump administration it shows this is a totally political effort.”

But pressed on what Democrats would do if Republican opposition held, Durbin was frank: “I don’t know.”

The House is expected to vote to raise the debt limit and fund government on Tuesday, after the Rules Committee takes up the matter. Schumer said Democrats in the Senate will hold a vote to raise the limit in the coming weeks, but without at least 10 Republicans to support the measure, there’s little that can be done aside from inclusion in the $3.5 trillion package. If the United States defaults on its debt in the coming weeks, it will be the first time in history this occurs. U.S. creditworthiness would take a hit, and markets could be severely impacted.

At least one Republican, Sen. John Kennedy of Louisiana, said he would vote with Democrats on the measure because it would include hurricane relief for his home state. However he predicted that the bill would still fall short of 60 votes.

As they grapple with a looming government funding deadline and potential credit default, Democratic lawmakers are also at odds over how to advance their $3.5 trillion social policy package and the Senate’s bipartisan infrastructure deal.

Progressives have vowed to withhold votes in the House for the Senate infrastructure agreement until their policy demands are met for the larger package. But moderates in the House and Senate have threatened to sink Biden’s major policy package over its scale and individual provisions.

“I’ve never seen anything like this,” Rep. Carolyn Maloney, D-N.Y., said of the to-do list before Congress. “I don’t know how’s it going to end.”