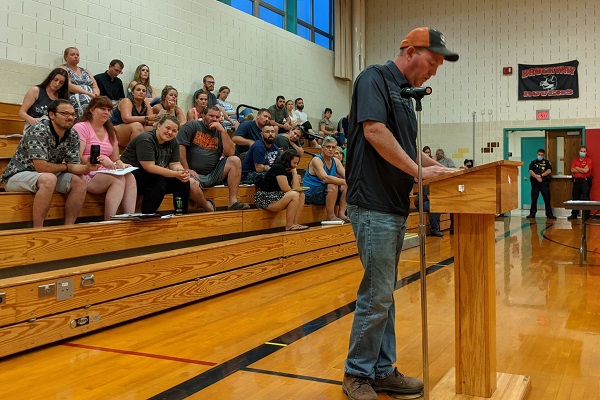 Eric Campbell speaks at the Brockway School Board meeting, September 2021.
Posted on September 16, 2021 by wcednews

Brockway, PA – Around 40 parents and residents from Brockway attended Tuesday’s school board meeting to tell the board that they do not want children masked in the district.

16 of those visitors stood up to speak, often getting applause from the rest of the gathering. The meeting was mostly orderly, with each speaker coming to a microphone and addressing the board.

Many of the speakers brought up the concept of liability for the district if they choose not to follow the Pennsylvania Department of Health’s mask mandate, which went into effect September 7. Some pointed out the inconsistency of the order, not mandating the mask in gym class, for example. While many of the arguments focused on the state, Gov. Tom Wolf, or the Department of Health, others suggested that the board or its solicitors were not acting in good faith. There was a tense moment as one person attempted to argue with Board President Katie Bish as the public comment section had closed. The resident felt that the district did not give them a sufficient answer, but that argument ended quickly.

Brenda Mishler encouraged the crowd to move their kids out of the district or vote out the school board. She said that the district should be working with the community, and added that she did not feel that they needed to be fighting.

Eric Campbell proposed two situations. His first was the actual pandemic happening now, and the second one was a hypothetical one where masks were proven to be dangerous. His thought was that liability was more likely for his hypothetical situation instead of the current pandemic.

Ultimately, the residents’ attitudes were summed up succinctly by Jason Smith, who only said he wants his kids to have a choice.

Superintendent Jeff Vizza asked the residents to take their energy to the state level. He said that a legal case in Butler County will probably have the Department of Health meet again, and when that happens, Brockway will look at their options. However, Vizza said that his goal is to have 180 days of instruction for the students.

Listen as Brockway Superintendent Jeff Vizza responds to opinions and complaints about masking in schools at the September 2021 school board meeting.