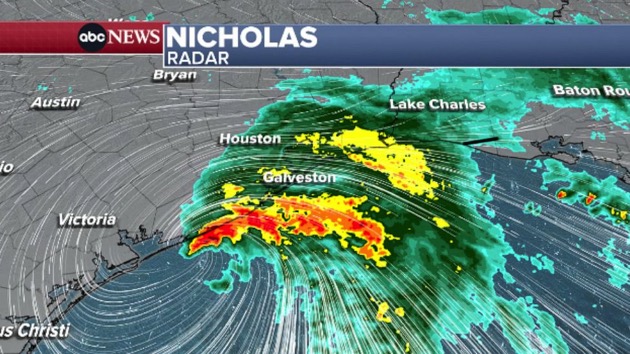 (NEW YORK) — Tropical Storm Nicholas is pounding the South with rain after roaring ashore in Texas early Tuesday as a Category 1 hurricane.

In the Houston area, 410,000 customers were without power Tuesday morning. In Harris County, all public health testing and vaccination sites have stopped operations and Houston schools are closed.

Rain totals reached 8 to 9 inches south of Galveston, where flash flooding was reported. Storm surge in Port O’Connor, Texas, was at nearly 4 feet.

The heavy rain is moving from the Houston area into Louisiana and Alabama where flash flood watches have been issued, including in New Orleans. Southern Mississippi could also see heavy rain and flooding.

Slow-moving Nicholas does not bode well for Louisiana, which has already been hard hit by hurricanes this year. The storm is expected to stall in the state early Wednesday, sitting there for days with heavy rain.

Six to 10 inches of rain is expected in Louisiana, including in New Orleans, with isolated totals reaching 15 to 20 inches.

The heaviest rain will arrive in New Orleans Tuesday night into Wednesday when life-threatening flash flooding is expected.