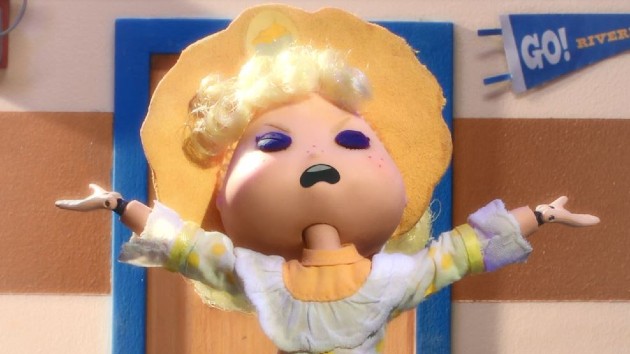 “It’s something Seth and talk about this on a daily basis, is when we started this thing, it was a second job for both of us,” Senreich told ABC Audio. “I was working in comic books and he was a full-time actor, and then we both had to adjust to our careers to make this animated television show.”

He adds, “When we sold this show to Adult Swim was they said…’You’re you’re an animated SNL. You’re a sketch comedy show using action figures. This thing could go on forever.’ We laughed at that point,” Matt admits.

Robot Chicken has a collection of famous voices behind its animated characters, and one of them is Battlestar Galactica and The Mandalorian star Katie Sackhoff. She calls Robot Chicken’s longevity “absolutely amazing.”

Sackhoff explains she came in to voice a few characters in her first appearance on Robot Chicken years ago, but one quickly became a fan favorite, a Strawberry Shortcake-like character called B**** Pudding.

“I wasn’t a voiceover actor when I came in, I…came into play myself, but Adult Swim was so cheap,” she lauighed, “they had paid me to come in and play myself. And I think that we finished so quickly that they were like, ‘We should get our money’s worth and have her play some more characters."”

Senreich explains Sackhoff’s foul-mouthed character was an instant hit behind the scenes as well. “Those are the sketches that just pop, when someone comes in and just sells it.”

And about her new gig, playing Mandalorian leader Bo Katan — which began as a voice part on Star Wars: The Clone Wars — Senreich surprised Katie by telling her that Robot Chicken had a lot to do with it.

“Before you got that gig on Clone Wars, [Mandalorian producer Dave] Filoni called Seth and I asked him what you were like to work with…He’d seen the stuff that we’d done. And he was like, ‘She’s awesome.’ And we’re like, ‘Yes, she is.’

Sackhoff was stunned, exclaiming, “Thank God I wasn’t a total b**** to you guys!”

The Clone Wars role led to Sackhoff’s playing the live-action version of the same character in The Mandalorian.