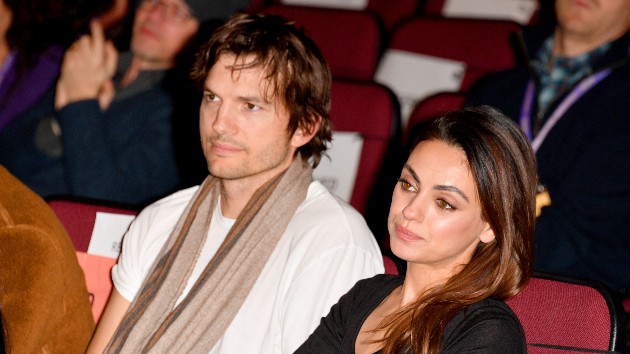 Ashton Kutcher continues to reap the consequences of igniting the great celebrity bathing debate of 2021, with things coming to a head at college football game that he recently attended.

Kutcher was serving as ESPN’s College GameDay guest picker on Saturday when the crowd at the Iowa State vs The University of Iowa football match began to loudly clap and chant “take a shower.” The That 70s Show alum was speaking about his new charity initiative when the stadium erupted, which partially drowned out his response.

The 43-year-old ignored the jeering and has yet to reference the incident on social media. However, the heckling happened live on television, with clips of the awkward interaction now going viral on Twitter.

Kutcher, along with wife Mila Kunis, first surprised the internet about their bathing habits in July when candidly revealing on the Armchair Expert podcast that they do not bathe their children every day. While the two attested that they wash their armpits, face and private parts on the daily, their remarks ignited a firestorm over proper hygiene.

While celebs such as Kristen Bell and Jake Gyllenhaal defended Kunis and Kutcher by revealing that they, too, don’t wash themselves daily, others like Dwayne Johnson and Cardi B made sure the public knew that they were firmly on the “bathe every day” train.

Kunis and Kutcher couple laughed off their now-viral interaction last month and even shared a hilarious clip of themselves bathing their young kids.

Deputy fatally shot, 2 injured in ‘ambush’ at Houston nightclub: Police
‘My body is not their property,’ a Texas woman’s journey across state lines for an abortion
As Disney+ plans a two-episode premiere for ‘Hawkeye’, Hailee Steinfeld “still can’t believe” she’s part of the MCU
Get a closer look at Jason, Freddy, Chucky, and more with Shudder’s ‘Behind the Monsters’
‘Squid Game’ creator on deadly K-Pop choreography, subtitles, and “stealing” ideas for season 2 from fans
Ben Affleck compares ‘The Last Duel’ ﻿to OJ Simpson case: “a very famous person accused of a horrible crime”