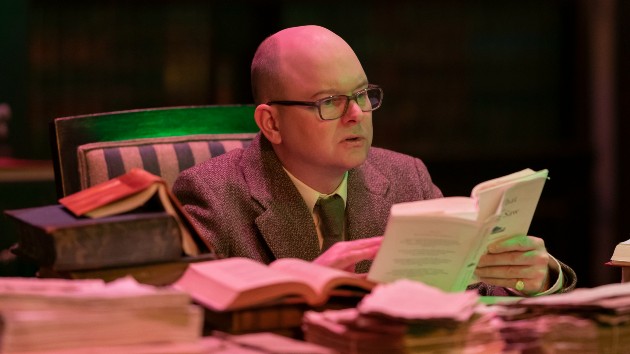 Based on the acclaimed film of the same name, FX’s comedy series What We Do in the Shadows follows a coven  of inept vampires who live in a house in the New York borough of Staten Island.

And while there are the traditional blood-suckers, a fan favorite from the series has become Colin Robinson, is an energy vampire, played by Mark Proksch. The nerdy character can literally sap the life from anyone he comes across via office high-fives, boring stories, and speeches at public hearings.

Robinson was created by movie and series co-creator Jermaine Clement, but Proksch’s take on him — and inspiration from his real life — landed him the job.

“…[U]ntil I was in my early 30s, I was doing a lot of temping, mostly in the Midwest,” he explains to ABC Audio. “And so when you’re temping at in the marketing department of a bank, you tend to meet these energy vampires and emotional vampires. And I’ve met my fair share, as we all have when working in offices. And so, yeah, there’s definitely inspiration that I’ve mined from there.”

The mockumentary series was nominated for eight Emmys its first season, including Outstanding Comedy Series, and its fan base continues to grow as its third season just premiered.

“It’s been really great,” Proksch explains. “You’re lucky when you’re on a show that it has any fan base at all. So many shows nowadays, it feels like you tune in for a little bit of it, and you can’t imagine who watches that show. And so to be on a show that is not only critically recognized but also recognized among people of all different generations has been really, really special.”