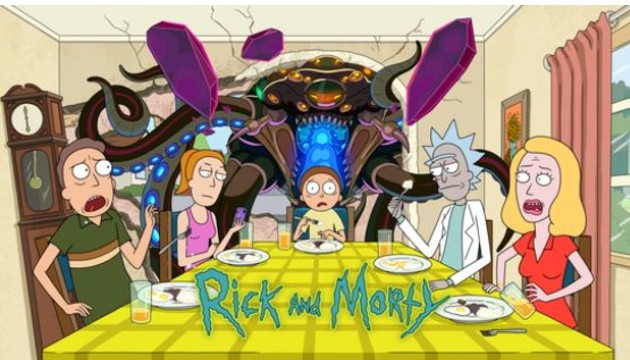 In a twist of life imitating art that would be right at home in the multiverse-twisting world of Rick and Morty, Adult Swim has released a promo for Sunday’s season finale, starring Christopher Lloyd as Rick Sanchez.

After all, Lloyd’s Back to the Future character Dr. Emmett Brown was the inspiration for the mad scientist from Justin Roiland and Dan Harmon‘s Emmy-winning animated series — which began as a toon called The Real Animated Adventures of Doc and Mharty. The latter, obviously, referred to Michael J. Fox‘s Marty McFly, which underwent a name change for obvious legal reasons.

Unlike Doc Brown, however, Harmon and Roiland’s Rick is not only the universe’s smartest man, he’s also a sociopath with unrepentant addiction issues, who drags his awkward teen grandson on adventures through space and time. In the short live-action promo, actor Jaeden Lieberher plays Morty, who follows Lloyd’s Rick through one of Rick’s green dimension portals into his garage workshop.

Lloyd, in costume as the character, says, “Morty, we’re home,” belching some of his dialog, in perfect Rick Sanchez fashion.

“Aw, geez,” Morty says, nervously rubbing the back of his neck.

The clip is not only wish fulfillment for fans and the show’s creators, but also for Lloyd. He told the Phoenix New Times in 2018 that he’d love to participate in Rick and Morty in some capacity. “It is a lot of fun,” he said of the animated series.

Rick and Morty wraps up its fifth season on Sunday at 11 p.m. on Adult Swim.